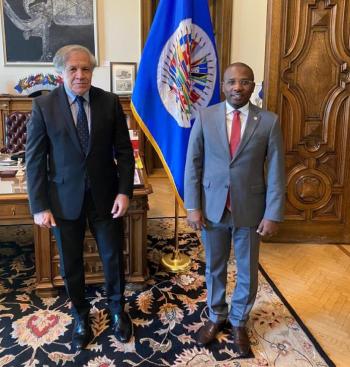 What could be more ironic and ludicrous than Haiti’s President Jovenel Moïse accusing Venezuela’s President Nicolas Maduro of being “illegitimate and dictatorial” while demanding that he immediately “hold free, fair, and transparent general elections”?

But that is exactly the position of the Lima Group, a collection of 15 Latin American states and Canada, which Haiti joined in January 2020.

From Tue., Aug. 4 to Sun., Aug. 9, Haiti’s new foreign minister, Dr. Claude Joseph (who took his post under new de facto prime minister Joseph Jouthe on Mar. 5) visited Washington with his tin cup, looking for money for the cash-strapped government. He met with Lima Group ambassadors at Washington’s Westin Hotel on M St. for about an hour on the morning of Thu., Aug. 6.

Immediately afterwards, Joseph met with a related group called the Inter-American Treaty of Mutual Assistance, known as TIAR or the “Rio Treaty.”

TIAR is a sort of Latin American-NATO, made up of 17 nations, formed in 1947 to provide cover for U.S. aggression in the hemisphere. The treaty’s Article 6 provides the justification, stating that if any “fact or situation might endanger the peace of America,” the body would take measures “for the common defense and for the maintenance of the peace and security of the Continent.”

Meanwhile, the Lima Group’s “sole purpose… is to harass and discredit the government of Venezuela, alleging that they are thereby ‘defending democracy,’” explained Venezuelan-born sociologist Maria Páez Victor in a recent Counterpunch article. “They do so by backing murderous illegal economic sanctions, attempted coups, threats of military intervention, and thus openly and shamelessly are violating international laws of non-intervention.”

In its cousin, the TIAR, the only two other Caribbean nations are the Dominican Republic and Trinidad and Tobago. Haiti is the second vice-president of the TIAR, while Brazil is the first vice president.

This is particularly ironic because, from 2008 to 2018, Venezuela provided Haiti with about $4.3 billion worth of cheap oil – some 20,000 barrels a day – under the PetroCaribe Accord, devised by the late President Hugo Chavez. Under the deal, Haiti only had to pay upfront for 60% of the petroleum. The other 40% went into the PetroCaribe Fund, a huge pool of capital repayable after 25 years at 1% interest.

The cash was supposed to be used for projects to aid Haiti’s people, like schools, hospitals, and infrastructure. But Haitian administrations embezzled and squandered close to $2 billion of the PetroCaribe funds, The government of Jovenel Moïse’s predecessor and mentor, Michel Martelly, burned through about three-quarters of the funds, funneling millions to Moïse’s companies, thereby helping him become president.

Since Moïse’s inauguration in February 2017, Haiti has gradually turned on Venezuela, although its solidarity had financed 94% of all Haiti’s development projects up until 2013, according to Martelly’s Prime Minister Laurent Lamothe.

On Mar. 28, 2017, Haiti’s OAS Ambassador Harvel Jean-Baptiste, who had been appointed by Moïse’s interim predecessor Pres. Jocelerme Privert, voted against an anti-Maduro resolution and defended Venezuela against the Washington-sponsored attack on its sovereignty.

But a year and two months later, on Jun. 4, 2018, Haiti’s Foreign Minister Antonio Rodrigue traveled to Washington to abstain from a vote on a similar anti-Venezuela resolution.

To add insult to injury, in February 2019, Jovenel hired eight foreign mercenaries to steal $80 million of oil revenues belonging to Venezuela from an escrow account at Haiti’s Central Bank (BRH) and transfer the money to an account he controlled. The heist was foiled when Haitian police captured seven of the mercenaries, but they were freed by U.S. Embassy intervention and never prosecuted.

In the Aug. 6 back-to-back meetings of the Lima Group and the TIAR, just the continent’s most right-wing players joined Minister Joseph: the ambassadors of Peru, Colombia, and Brazil. Also in the Haitian delegation were Haiti’s Ambassador to the Organization of American States (OAS) Léon Charles, Haiti’s acting Ambassador to the U.S. Hervé Denis, and Dr. Weibert Arthus, Joseph’s Chief of Staff.

While condemning President Maduro’s internationally observed and certified May 2018 re-election (he won 68% of the vote), Almagro has been Jovenel Moïse’s greatest champion, defending him against charges of electoral obstruction. Meddling in Haiti’s internal affairs, Almagro insists that Moïse’s term will last until Feb. 7, 2022, although Haiti’s opposition and masses insist, from their reading of the Constitution, that it ends on Feb. 7, 2021, a year earlier.

Jovenel Moïse held no elections during his first three years in office. As a result, the Parliament has been dissolved, local officials’ terms have lapsed, and the president is ruling by decree. Just two weeks ago, his entire Electoral Council resigned. Nonetheless, Almagro and Washington are defending his corrupt and repressive regime, whose immediate departure giant nationwide demonstrations and general strikes have demanded for the last two years.

In addition to demanding that Moïse step down, demonstrators have a central slogan asking “Where is the PetroCaribe money?” and want a trial of those who stole it.

Of course, the most important meetings for Chancellor Claude Joseph were those with his most powerful and monied ally: the U.S. State Department. On the afternoon of Aug. 6, he met with Acting Assistant Secretary of the Bureau of Western Hemisphere Affairs Michael Kozak, and later with other State Department officials.

“Minister Joseph came to ask for OAS support for a new electoral council and the national identification office distributing a new national ID that will serve as an electoral card,” Haiti’s OAS Ambassador Léon Charles told Haïti Liberté. “The Lima Group encouraged us to use the OAS system… so that we can call for support from our friends in the region.”

A huge controversy is raging in Haiti over the new national ID cards (introduced at the start of the year), which have been produced by a German company Dermalog. There are charges of corruption, fraud, and other irregularities in their production and replacement of the previous ID card.

The support of Washington and its proxies – the OAS, Lima Group, and TIAR – for Jovenel Moïse’s regime is likely motivated by Haiti’s zealous role in the assault on Venezuela, which shows signs of escalating.

“There are strong indications that Washington is up to something serious,” said William Camacaro, a Venezuelan Bolivarian Circles leader, activist, and analyst, currently based in Caracas. “The U.S. has sent over 100 tanks to Colombia recently, and this is very ominous.”

Haiti’s support for sharpened acts against Venezuela would be critical for the U.S., but Jovenel Moïse’s political situation is very precarious. Many observers doubt he will be able to carry out elections, especially with the electoral council’s mass resignation last month.

“On an internal level, the regime sees that it has a dwindling number of allies willing to take a chance in joining in its elections, so it is trying to get the OAS’s benediction, so that the OAS becomes a stakeholder in those elections,” explained a long-time senior official of Haiti’s foreign service who requested anonymity. “Even if it can find a few opportunists to go into a new slapdash electoral council, if the OAS will approve it, Jovenel’s government figures it may provide enough semblance of legitimacy that it can take a chance and just charge ahead.”

“DO NOT TRAVEL TO HAITI DUE TO  CRIME, CIVIL UNREST, KIDNAPPING, AND COVID-19.”

Ironically, Haiti’s foreign service, like the rest of the government, is in complete crisis. Haitian Foreign Ministry employees have not been paid in eight months, our source explained, but Joseph’s delegation stayed at the Westin Hotel where rooms average about $300 per night.

Inconveniently, the U.S. State Department issued its strongest advisory against traveling to Haiti  – Level 4 – on the very day Joseph was meeting with it, the Lima Group, and the TIAR.

“Do not travel to Haiti due to  crime, civil unrest, kidnapping, and COVID-19,” the notice reads. “Violent crime, such as armed robbery and carjacking, is common. Kidnapping is widespread. Kidnappers may use sophisticated planning or take advantage of unplanned opportunities…. Demonstrations, tire burning, and roadblocks are frequent, unpredictable, and can turn violent. Local police may lack the resources to respond effectively to serious criminal incidents. Emergency response, including ambulance service, is limited or non-existent. Travelers are sometimes followed and violently attacked and robbed shortly after leaving the Port-au-Prince international airport.”

The timing of the dire travel alert “might have been a message to Jovenel that Washington is losing patience,” observed former OAS translator Serge Bellegarde, who lives in Washington and spent years watching U.S.-Haiti relations from a ringside seat at the OAS. “They might be backing him for now, but possibly they want him to know that he’s not going to get a blank check.”