Haiti’s Guy Philippe, convicted of money laundering, has lost a bid for freedom 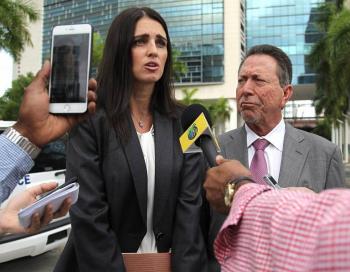 Attorneys Zeljka Bozanic, left, and Alan Ross, right, talk with reporters outside Miami federal court after their client, Guy Philippe, was sentenced to over nine years in prison on drug-related money-laundering charges.CARL JUSTE

Guy Philippe won’t be getting out of the U.S. prison system anytime soon.

The convicted money launderer and elected Haitian senator — who was also at various times a law student, a police commander, a coup leader and a fugitive in an international drug trafficking case — has lost another bid for freedom in a Miami federal court.

A federal judge last week dismissed Philippe’s appeal of his nine-year sentence, concluding his claims that his defense attorneys were “ineffective” and “working for both sides” weren’t credible.

Philippe pleaded guilty to a money laundering conspiracy in April 2017 and was sentenced to nine years in prison that June.

U.S. District Judge Cecilia Altonaga found that Philippe, who said he didn’t need a Creole interpreter in court and agreed to speak in English, understood the proceedings and the potential consequences while he spoke with his defense attorneys before the plea. Philippe, 50, agreed to the plea as a way to avoid a potential life sentence in a major narcotics case. As part of the agreement with the U.S. attorney’s office, Philippe also agreed not to appeal his conviction and sentencing.

Philippe’s motion to vacate his guilty plea and sentence was based on his argument that he hadn’t received an effective defense from his lawyers.

The original indictment, which had been filed in Miami in 2005 but remained in limbo until his arrest in Haiti two years ago, accused him and others in the Haiti National Police of accepting bribes from cocaine traffickers in exchange for protecting their shipments from Colombia to Haiti to the United States.

In her ruling, Altonaga said she questioned the “college-educated” Philippe about the plea deal in court and that she “received his confirmation he was satisfied with the representation his counsel had provided him.” Altonaga based her decision on a recommendation by Magistrate Judge Patrick White, who had previously conducted a full hearing on Philippe’s motion.

While Philippe, unsuccessfully argued that his defense attorneys provided “ineffective assistance of counsel,” he is not giving up his fight for freedom. His lawyer told the Miami Herald Friday that he will challenge Altonaga’s ruling with the federal appeals court in Atlanta.

“I spoke with Guy this morning and he said he does want to proceed in that fashion,” lawyer Philip Pitzer said.

Despite his international arrest warrant, Philippe has for years fashioned himself as a nationalist whose rights were violated when he was put on a plane to Miami following his Jan. 5, 2017, arrest outside a Port-au-Prince radio station. He lobbied Haitian senators from behind bars, and they passed a resolution condemning the arrest. Before he pleaded guilty, he also professed his innocence in a three-minute recording that went viral on the WhatsApp messaging service.

“They have absolutely no proof that I am involved in drugs,” Philippe, proclaimed in Creole from his jail cell.

Philippe became well-known in Haiti after he led a bloody 2004 coup against then-President Jean-Bertrand Aristide. The following year in November 2005, he was secretly indicted in the U.S. on drug-trafficking and money-laundering charges. The next year, he ran unsuccessfully for president even while U.S. authorities were trying to capture him.

Last year, in another lawsuit, Philippe said his civil rights were violated by a slew of U.S. officials and demanded $100 million in compensation while also insisting that his conviction should be overturned. In a 22-page handwritten pleading, he listed former U.S. ambassadors to Haiti, federal prosecutors and unnamed agents with the Drug Enforcement Administration involved in his case. Another Miami federal judge dismissed the suit.

Philippe, who sometimes called in to local Haiti radio stations to remain politically relevant even while in hiding from U.S. authorities, led the Consortium political party before his arrest. The party is among several expected to back candidates in Haiti’s legislative election this fall.

In her ruling, the judge noted that Philippe wrote a letter to Bozanic in January 2018 — one month before he accused her of being ineffective — suggesting that he had no qualms about her.

Philippe’s nine-year sentence — less than half the maximum 20-year sentence possible for his money-laundering conviction — was the result of a deal with federal prosecutor Lynn Kirkpatrick after Altonaga refused to dismiss the case based on Philippe’s claim of immunity as a senator-elect in Haiti.

The judge also chastised the federal government for not trying harder to arrest Philippe in the years after his 2005 indictment. He was arrested by Haiti National Police and turned over to the Drug Enforcement Administration in early January 2017, days before his swearing-in.

The sentencing brought to a conclusion a federal investigation into drug trafficking, money laundering and corruption at the highest levels of Haiti’s government that had begun more than a decade earlier when the island became a notorious hub for shipping South American cocaine into the United States.