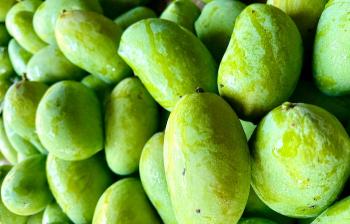 By far the most exported mango in Haiti is the Francine mango. The primary reason why it is the only exported Haitian mango variety is that the USDA requires mangoes to be dunked in hot water for 60 to 90 minutes, killing any fly larvae because of the threat of the Mediterranean fruit fly. The Francine is the only Haitian Mango that resists the heat.

It is also a large fleshy, low fiber and tasty mango, factors that help make it the most expensive Mango in the United States, with wholesale prices much higher than those of other imported mangoes.

As can be noted below, the highest price recorded for Haitian mangoes this season was $13 per package.

According to a recently published report by the National Mango Board, total mango volume shipped by Haiti to the U.S. during the week ending 8/20/2022 was approximately 4,255 boxes for a total of 1,448,037 boxes; the season is projected to be about 48 percent lower YOY.

The Haitian mango season began the third week of April and is expected to run until the second week of September with a projection of approximately 1.4 million boxes.

According to the US embassy in Haiti, production and exportation of mangos provides a significant source of income and sustenance for approximately 150,000 Haitians, most of whom live in rural areas.

The broad impact on the Haitian population and economy is attributable to a unique characteristic of mango production in the country that differentiates it from elsewhere. It’s a cottage industry because Haiti lacks a network of mango orchards. Most exported mangoes are harvested from backyard trees.