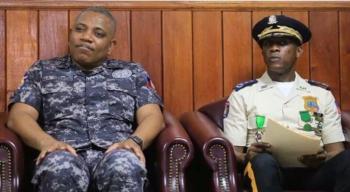 President Jovenel Moïse replaced Haitian National Police (PNH) chief Michel-Ange Gédéon with Normil Rameau, who was the force’s number two cop. Gédéon’s three-year term ended on Aug. 23. Moïse could have renewed it, but there was a stilted tension between the two men. Moïse felt that Gédéon was not compliant enough to his wishes.

Rameau, who was named by an Aug. 26 decree as the interim police chief, was the former Director of the Central Directorate of the Judicial Police (DCPJ) until he was transferred to Washington, DC to work in the Haitian Embassy as the Minister Counselor for Military Affairs.

“Gédéon did a good job under very difficult circumstances,” Pierre Espérance, the executive director of the National Human Rights Defense Network (RNDDH), told Haïti Liberté. “He resisted intense pressure that he allow the force to be used for political purposes.”

One recent incident epitomizes the nature of this pressure and resistance. On Feb. 16, Haitian police in downtown Port-au-Prince arrested seven foreign mercenaries hired by President Jovenel Moïse to carry out an $80 million heist at the Haitian central bank.

Immediately after the arrest, Gédéon received calls from three men working on behalf of Moïse. They tried to convince him to release the team, according to a highly-placed police source who witnessed the calls.

One call came from a minor government official who helped coordinate the mercenary plot, Fritz Jean-Louis. He tried to convince Gédéon that their mission was a “dossier l’État” – a “state affair” – and thus immune from police intervention. Another call came from Jovenel Moïse’s right-hand man, Special Advisor Ardouin Zéphirin, who told the police chief that the team was there to do “work for the bank.” Finally, Justice Minister Jean Roudy Aly called to instruct Gédéon to “release them to the Americans.”

“BE AWARE THAT THE REAL BANDITS TO BE FEARED ARE NOT THOSE KNOWN TO ALL, BUT THOSE WHO GO AROUND IN SUITS AND WHITE SHIRTS, CRUISING IN BIG CARS,” GÉDÉON SAID.

But Gédéon refused all three requests. He told Aly that only a Haitian judge could release the detainees, and that the minister would have to go through the office of the state prosecutor (commissaire du gouvernement) Paul Eronce Villard. Furthermore, Gédéon said that even if the men were released, he had to keep the “corps du délit” – the body of evidence – which was seized from their vehicles. This included a large cache of automatic weapons, bullet-proof vests, drones, knives, and satellite phones.

Another case that irked the President was that of Arnel Joseph, an infamous gang leader whom the PNH finally arrested on Jul. 22. The police discovered and revealed that Joseph had been in frequent telephone contact with Sen. Gracia Delva, a close regime ally. “This dossier implicated Gracia Delva in the kidnappings being carried out by Arnel, and Moïse could not forgive Gédéon for outing a senator so close to the executive as being involved in kidnapping with Arnel’s gang, which was also close to the regime,” Espérance said. “Gédéon did a professional job, and Moïse could not pardon him for that.”

According to the Miami Herald, Moïse was “frustrated by his inability to control the police” and “told an audience in Miami at a public meeting he planned to ask his prime minister to invite him to a gathering of the police council so that he could give directives on security measures. Later his administration told Gédéon that he had to run all administrative changes by the prime minister first.”

Espérance, who was originally apprehensive when Gédéon took office in 2016 under interim President Jocelerme Privert, is fairly sanguine about Rameau. “I think he is honest and upstanding,” he said. “He’s very straightforward. He’s the guy who dismantled the Galil Gang, which was close to [former president Michel] Martelly, and he also dismantled Brandt’s gang [Clifford Brandt, the scion of a prominent bourgeois family, was arrested in October 2012 for running a kidnapping ring]. He fought hard against kidnapping when at the DCPJ. He’s done a lot of good work.”

The 16,000-officer PNH is now shadowed by the 2017-resurrected but still embryonic Haitian Army, which former president Jean-Bertrand Aristide had demobilized in 1995. The new army, which just graduated a class of 250, is aiming to have 5,000 soldiers.

As the final United Nations occupation force – the MINUJUSTH – is scheduled to leave Haiti in a month and a half, the PNH will finally again become Haiti’s principal armed force.

“Be aware that the real bandits to be feared are not those known to all, but those who go around in suits and white shirts, cruising in big cars,” Gédéon said pointedly at Rameau’s swearing-in ceremony on Aug. 27. “In difficult moments, you will find yourself alone in the face of senior state officials, most of them without stature or spine, cowardly and dishonest, favoring malicious gossip, offensive scuttlebutt, and low blows from stupid amateurs and morons.”

“We have a PNH that politics has been trying to divide,” he concluded. “Tighten the ranks around your new leader. Continue to stand up. Stay united, still cultivate apoliticalism within the institution, and you will defeat and overcome any attempt at division and implosion.”