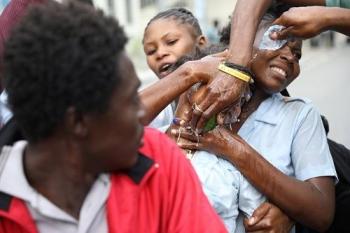 Haiti's National Police have fired tear gas at a mass demonstration against the government's "budget of death."

Thousands of people took to the street in Haiti's capital Port-au-Prince to protest the bill which they argue will favor the elite at the expense of the most country’s most disadvantaged.

As the protesters arrived at the National Palace, the police fired tear gas to disperse the crowd.

Former presidential candidate Jean-Charles Moise was among the protesters.

Today’s action is the latest in a series of demonstrations against the controversial bill — described by protesters as a “budget of death.”

Organizers have promised further action if President Jovenel Moise does not meet their demands.

“These protests are going to continue and we are here with the people. This budget law is a crime against the people, it is a step back on people’s rights. As officials, we have to work in favor of the people, not against them,” opposition Senator Antonio Cheramy told the press.

More demonstrations are planned for Thursday and Saturday in Port-au-Prince.