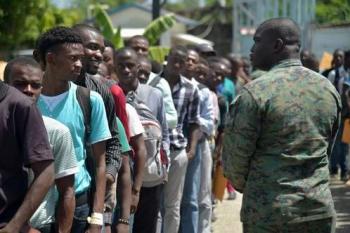 Haiti is reconstituing its previously disbanded army after more than two decades, amid concerns about growing insecurity as a United Nations peacekeeping force is set to withdraw later this year. And while politicians have justified the move as a step toward combating contrabandtrafficking, the real motivations behind the decision may be political.

The recruitment effort for the new army was announced by the Defense Ministry in early July and has seen more than 2,200 candidates sign up in the first round, reported Haiti Libre. Due to budget constraints, the force will have fewer than 500 members.

Defense Minister Hervé Denis said the army's mission would be to fight against contraband smuggling and provide relief in case of natural disasters, according to the Miami Herald. The minister argued that the cost of the force will be outweighed by its impact on smuggling from the Dominican Republic, which he estimated causes lost tax revenues for Haiti of between $200 million and $500 million per year.

However, critics have said that the recruitment process has lacked transparency and has been conducted in the absence of a command structure for the force, reported AlterPresse.

Others have questioned the logic of investing in an army instead of dedicating increased resources to Haiti's 15,000-strong National Police. An August 2016 report by the UN Secretary General noted significant shortcomings in planned improvements to the force, including ramping up its border control capabilities.

Several experts consulted by InSight Crime raised concerns about the potential efficacy of the army in terms of the proposed anti-contraband efforts, while pointing to possible political motivations for re-establishing the force. And all warned of the risk that the violent and abusive history of Haiti's military repeat itself.

"Sending a poorly-trained, underpaid military to the border to confront a massive corruption scheme appears destined for failure," said Jake Johnston, a research associate at the Center for Economic and Policy Research (CEPR) who has done extensive research and reporting on Haiti.

Indeed, an inadequate fiscal framework and corruption within an inefficient customs agency are the two primary drivers of contraband along the border -- not the lack of a military presence.

"The push to restore the military is not a rational one based on Haiti's needs, but an ideological one," he told InSight Crime.

"This is a party with close connections to the old Duvalierist and militarist clique that had ruled Haiti for decades and whose power and influence was threatened by previous governments. It would be difficult for the government to turn its back on its source of power now that it is in office," the CEPR researcher said, referring to the governments of François "Papa Doc" Duvalier and his son Jean-Claude, also known as "Baby Doc." The authoritarian political dynasty, which lasted from the 1950s to the 1980s, was associated with the use of armed forces as a tool of political repression -- a fact that contributed to the decision of then-President Jean-Bertrand Aristide to disband the army in 1995.

Johnston's comments echoed those of Brian Concannon, the executive director of the Institute for Justice and Democracy in Haiti advocacy organization.

"I have seen nothing that would indicate that the army would do a better job of policing the borders or responding to natural disasters than civilian police," Concannon said.

He added that other examples of militarized security initiatives across the Americas suggest a better course of action may be to strengthen the civilian police rather than create a new, military institution.

Concannon also pointed to political motives at play, arguing the army would help the government "exert control over its political opponents," evidenced by "the initial army proposal of [former] President [Michel] Martelly that specifically included spying on journalists and others, to the current efforts to recruit soldiers before there is even much structure."

Interestingly, both Concannon and Johnston noted underlying socioeconomic factors behind the public's support for the army and the seemingly widespread interest in the recruitment effort.

"This has gained some additional traction because of the high level of youth unemployment, where any opportunity for steady pay is welcome. Also, given the high proportion of Haiti's population which is quite young, many lack the historical experience that others have of the Haitian military and its repressive actions," Johnston explained.

"People are signing up because they are desperate for jobs and meaning," Concannon added, and warned that "once [members of the new army] have the position, they will do what they need to do to preserve that status."