Haiti's schools re-open but many parents now can't afford them 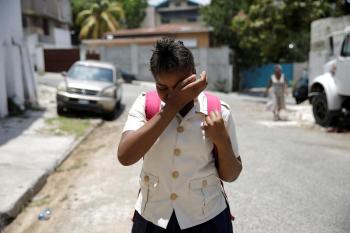 Haiti’s school children missed class this year first due to months of violent unrest, then the coronavirus pandemic. Now, as schools are finally reopening, many parents can no longer afford it, raising the prospect hard-won gains in education could be lost.

“The deadline to pay is next Monday. Without paying, I won’t be able to attend the class,” said Nickerla Etienne, 16, through streams of tears, after being sent home from her private school in the capital, Port-au-Prince, for failing to pay up.

While the pandemic has disrupted education worldwide, the situation is especially acute in Haiti, where just an estimated two-thirds of adults can read and write.

“We’ve never seen a crisis quite on this scale before,” said Beatrice Malebranche at United Nations children’s agency UNICEF in Haiti.

Virtual schooling has been impossible for most in the Caribbean country where more than half the population lives on less than $3 per day and has little internet and television access.

Meanwhile, given the weakness of the Haitian state, suffering from years of unrest and mismanagement, and still struggling to recover from a devastating 2010 earthquake, four out of five schools in the Caribbean nation are private.

And while fees are typically low, they have become unaffordable for many as the pandemic has worsened Haiti’s already dire economic plight.

Even families whose children have scored coveted places at public schools are struggling just to buy them stationery or decent shoes.

Outside of schooling, children risk entering the informal jobs sector, or worse, being drafted into Haiti’s gangs.

The education ministry has little firepower to tackle the problem, with it receiving 11% of the total budget down from 16%. The global average is 20% of total spending.

Spokesman Miloody Vincent told Reuters it would provide financial aid to at least 50,000 of the most vulnerable families, which will not go far in the country of 11 million.

The situation is a setback after Haiti hiked its primary school attendance rate to 84% from 76% over the last decade, said Malebranche.

NO MONEY FOR TEACHERS

While coronavirus has left Haiti relatively unscathed healthwise, the education ministry has mandated that staff and pupils wear masks. Schools must provide hand washing, even if it is just a bucket of water.

The government has also ordered the most overcrowded schools divide up classes to ensure physical distancing and rotate each in shifts of two to three days a week, raising concerns over the fact they would provide fewer lessons per child.

Yet directors of five private schools in low-income areas visited by Reuters said only around half of their pupils had returned so far. Overcrowding is no longer a problem - school finances are.

“I haven’t been able to pay teachers since March,” said Leonard Turenne, director of the Pierre Fermat secondary school. “The state promised us some financial aid but we haven’t received anything yet.”

Some already underfinanced schools will likely close, with teachers switching to other professions, experts say.

Etienne’s father, Jackson Dorceus, 53, used to be a teacher himself but in the 1990s switched to working as a bodyguard because his school had not paid him for a year.

Yet although he “traded chalk for firearms”, and his wife runs a parapharmacy, the economic situation is so bad they still cannot pay their daughter’s fees.

The unrest last year financially ruined many businesses which were unable to get back on their feet before coronavirus hit, while double-digit inflation is ravaging household incomes and remittances are falling.

“Most our clients owe us money,” said Dorceus, standing outside their corrugated iron one-room house. Like many parents, he said he would seek to negotiate the fees with the school, or failing that ask for church alms.

Some parents who cannot afford to send their children to school now might send them next year - a practise that explains why so many Haitians are well into their twenties before they graduate high school.

The risk though is the parents might never afford it.

Etienne, an eager student, dreams of becoming an air stewardess. For the time being though, she must content herself with selling popcorn from the front porch of her parents’ shop.

Reporting by Andre Paultre in Port-au-Prince and Sarah Marsh in Havana; Editing by Lisa Shumaker