‘He hasn’t even been baptized yet,’ says mother of Haiti’s latest victim of gang violence 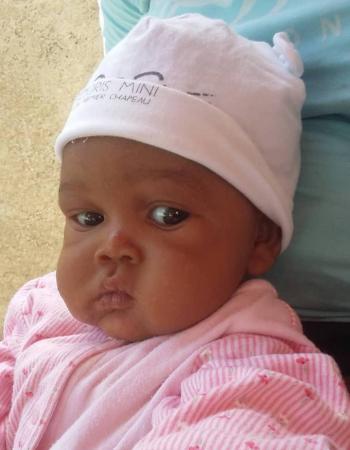 The infant, Godson Joseph, became Haiti’s latest murder victim Monday when he was killed during a gang ambush just east of the capital near the Haitian-Dominican Republic border in the farming community of Ganthier.

A notorious gang linked to several protection rackets, rapes and assassinations and known as 400 Mawozo sprayed the minibus they were traveling in with bullets as Gervais, 19, cradled her sick child, who was headed to a hospital in nearby Fond-Parisien.

Everyone was injured by the shots except for Gervais, while little Godson’s life was cut short at four months old when a bullet pierced his back.

“He hasn’t even been baptized yet,” an inconsolable Gervais said.

The driver of the minibus in Monday’s attack said at least two passengers, including the infant, were killed. Speaking to the Miami Herald on condition of anonymity because he fears for his life, he said the attack happened sometime after 6:30 a.m. as he was speeding along the road in hopes of avoiding the gang. He was soon forced to slow down by a vehicle blocking the roadway.

“I heard someone say, ‘Stay here,’” the driver said.

As he prepared to comply, the driver, 21, said shots were fired and one of the vehicle’s 10 passengers screamed for him to “go” because someone had been shot. As he took off in the direction of the police station, a bullet pierced his arm and shoulders as the gang continued to spray the vehicle with bullets.

Gervais, 19, said she doesn’t know why God spared her life and took that of her child. A justice of the peace came and took a report. Though she pleaded for his body, the baby was transferred to a local morgue, where they are asking her to pay $180 to claim the body, which the unemployed mother says she doesn’t have.

“I had decided because the child had not yet been baptized, I wasn’t going to do a funeral for him or bury him in a cemetery. I was going to put him in a wooden box and bury him at the back of my house,” she said. ”I just don’t have the means.”

Never, she said, did she imagine becoming a victim of Haiti’s gang rampage.

At least 116 Haitians have lost their lives to gang violence, mostly in the metropolitan Port-au-Prince region, during the first six months of this year, according to statistics compiled by human rights groups. A pregnant woman was shot last week in the Boston area of the Cité Soleil slum. A music video showing her forehead covered in blood, her pregnant body lying on the ground, went viral on social media networks.

Also in July a centenarian who recently celebrated a birthday was killed, as well as an 8-month-old baby in the Norway, Belekou, district of Cité Soleil who was killed by a well-known gang member. After the child’s parents went public with their grief, they were threatened by the gangs, who have also threatened journalists and human rights advocates in recent days.

“Up until now, they are living in a situation of insecurity where they can’t even take the first steps so that the case can be brought before the justice system,” said Jacques Letang, president of the Haitian Bar Federation, who is representing the parents of 8-month-old Merrydyna Fleurimont. “I contacted the justice of the peace for Cité Soleil so that he could do an investigation at the site where the child was killed and he stated his inability to go. He said even the police had abandoned the area.”

Jacques Letang, president of the Haitian Bar Federation and founding member of the Human Rights Office in Haiti address the U.N. Security Council in June on the deteriorating human rights situation in Haiti. BY UN WEB TV

The fact that there has been no investigation or even an autopsy three weeks after the killing, Letang said, shows the indifference of the government when it comes to guaranteeing the security of its citizens.

“You don’t sense a will on the part of the authorities to address this situation and to discourage the bandits and gangs that are wreaking havoc on the population,” said Letang, who is also part of a collective that has been demanding justice for the victims of last year’s La Saline massacre, in which two government officials and a former police officer were implicated but haven’t been charged.

Just weeks before little Merrydyna’s death, during an appearance before the United Nations Security Council, Letang sounded the alarm on Haiti’s proliferation of armed gangs and guns, persistent human rights violations and lack of government accountability.

In a report shared with the Security Council, the U.N.’s Integrated Office in Port-au-Prince said that while the violent protests of 2019 had largely abated, Haiti was facing increased insecurity as gangs battled for turf inside the country’s marginalized neighborhoods. Regular spikes of gang-related incidents had been reported in Cité Soleil, Croix-des-Bouquets, Martissant and Village de Dieu over the first two months of 2020, as gangs tried to expand their respective areas of control, the report said.

In addition to an increase in gang-related shootings and killings, Haiti experienced a 200 percent increase in reported kidnappings the first few months of 2020, the U.N. office said.

“The climate of insecurity is taking proportions that are very alarming, very worrisome, and it’s the innocent who are victims,” said Renan Hédouville, director of the national Office for the Protection of Citizens. “What’s happening here is very serious and today, the population has been abandoned.

“What’s even worse is that when the population decides to voice its frustrations, to demand security, to demand protection, the same police that has never done anything to protect them against the bandits, attacks them.”

Videos shared on social media showed police chasing protesters. In one instance, a prominent human rights activist was pulled by an officer who tried to seize a strip of cloth that said, “We want to live, We have a right to live.”

It was a far different response from what took take place days after the second sit-in, when a newly organized federation of gangs, calling itself G-9 and Family and Allies, freely marched through the streets of the capital in a show of force.

“We sum up what’s happening today in just one phrase: The bandits benefit from a certain protection, they can move freely; they can organize themselves,” Hédouville said. “But the population doesn’t benefit from the protection of certain authorities because every time they demand protection of their lives and property, they are instead met with aggression.“

So far, Hédouville said, there has been “complete silence” from the president and the prime minister, to whom he wrote following the killing of Merrydyna in Cité Soleil. “There has been no response, not even acknowledgment of receipt,” Hédouville said.

In an appeal for more police presence and help following Monday’s attack in Ganthier, the Peasant Liberation Movement, MOPELIGA, said the area has been abandoned despite all of the money that it contributes to the Haitian treasury, because it is near the Malpasse border, where trucks crossing with goods from the Dominican Republic pay customs duties, and a large border market.

For almost two years, the group of farmers said, the area has been held hostage by the 400 Mawozo gang. The Creole name of the gang leader, Lanmo SanJou, loosely translates to “Death doesn’t know which day it’s coming.”

“Does the country have no leaders?” they said in a statement. “Are the authorities in the government only concerned about wielding their privilege, and the lives of the population don’t mean anything to them while they are living well with their wives and girlfriends and their children?”

Ever since the 400 Mawozo gang established itself along the road connecting Malpasse and the capital, the farmers said, there have been problems. “Even if the police in Ganthier had the political will, they cannot do anything because effectively the 25-member police unit is too small and of the three patrol cars the police station has, two are not working.”

This is why, the farmers said, the bandits are operating unchecked and have killed more than 48 people, and wounded at least 163 along the route.

“The majority of the vendors cannot go back to the border,” the farmers said. “The bandits rape any girls who do not want to have relations with them. As of 7 p.m., all of the area is covered in darkness. It’s the bandits who collect the taxes from the merchants.”