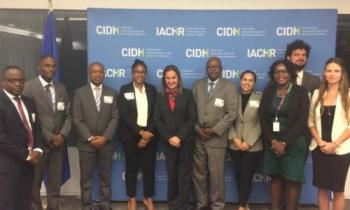 Monday, September 23rd at the IAHCR hearing, IJDH and BAI said an accountable response to the massacre in La Saline would include the removal of the senior, government officials implicated. Fednel Monchery (Director General of the Ministry of the Interior) and Richard Duplan (Delegate of the West Department)  were removed from their posts, this week.

Also, this week, the Prosecutor responsible for oversight of those cases, Paul Eronce-Villard, who presented for the government of Haiti at Monday’s hearing, resigned from his position. Strikingly, it is reported he resigned “because the government had asked him to systematically repress those who call for both their fundamental rights (social and economic rights) and the departure of President Jovenel Moïse.”

This Monday, BAI and IJDH appeared before the the Inter-American Commission on Human Rights (IACHR/CIDH) for a public hearing on corruption and accountability failures under President Jovenel Moïse’s Administration and their consequence on human rights in. The hearing, at which the Government of Haiti also presented, led the IACHR to express its deep concern at the human rights situation in Haiti and to publicly request the Haitian government allow it to conduct an in loco country visit to Haiti.  These country visits are a mechanism used by the IACHR to conduct an in-depth analysis and/or investigate a specific human rights situation in one of the member countries of the Organization of American States (OAS).

BAI and IJDH were joined at the hearing by Sonel Jean-Francois,  former juge d’instruction (investigating magistrate who carries out investigations into allegations of criminality) and head of Haiti’s Central Unit of Financial Intelligence (UCREF). Jean-Francois was fired by President Moïse in 2017, following UCREF’s preparation of an investigative report that implicated Moïse in money laundering.

Before the Commission, BAI and IJDH outlined the Moïse Administration’s accountability failures in response to  PetroCaribe corruption findings – with Me. Jean Francois explaining how the Administration’s actions have weakened state and judicial institutions responsible for anti-corruption efforts – as well as the far reaching consequences of the Administration’s actions on human rights.  “The PetroCaribe protests are unprecedented in their enormity and persistence,” outlined BAI Managing Attorney Mario Joseph, who highlighted the threats and attacks against those calling for accountability, including police killings of protestors, attacks on journalists and threats to judges of the Court of Auditors investigating PetroCaribe corruption. Joseph also explained that domestic cases brought in response to the November 2018 La Saline massacre have stalled in court, while senior government officials implicated in the massacre remain in their posts. BAI and IJDH filed a request with the IACHR for urgent “Precautionary Measures” for victims of La Saline massacre in August 2019.

IJDH attorney Sienna-Merope Synge outlined how PetroCaribe corruption and the government’s response is aggravating entrenched social and economic conditions that are acutely worsening under the current Administration. The failure to effectively invest PetroCaribe funds, intended to improve social conditions, in Haiti and the current political crisis catalyzed by the Moise Administration’s response to corruption findings are fueling an economic deterioration that is hitting the poorest the hardest.  The situation undermines social and economic rights, degrades the rule of law, and risks reversing Haiti’s fragile progress toward development. IJDH and BAI’s full written submission can be found here (5-page briefing note here) , and you can watch th[is] video.


The Haitian Government was represented by the head prosecutor in Port-au-Prince, Paul Eronce Villard, the Director of Judicial Affairs of the Ministry of Foreign Affairs Frantz Dorsainvil, and officials from both the Ministry of Justice and Public Security, and the Primature. At several points during the hearing IACHR Commissioners expressed their dissatisfaction with the explanations offered by the Government delegation in response to the serious human rights concerns raised.

In the coming days the Commission will issue a public statement about this week’s hearings, including those on Haiti. The Commission also made clear that it is awaiting the Haitian Government’s invitation to allow it to conduct the requested in loco visit to Haiti.

What is the IACHR?

The Commission is a quasi‐judicial body that promotes and protects human rights as part of the Inter‐American Human Rights System,[1] the regional system created to monitor and ensure implementation of human rights within the thirty‐five member states of the Organization of American States (OAS). Haiti has been a member state since the OAS’s beginning. The OAS  was established in 1948 to achieve among its member states “an order of peace and justice, to promote their solidarity, to strengthen their collaboration, and to defend their sovereignty, their territorial integrity, and their independence.“[2]

Over the last few years, the IACHR has increasingly focused on the impact of corruption on human rights. It has found that corruption “affects human rights in their entirety – civil, political, economic, social, cultural and environmental – as well as the right to development; weakens governance and democratic institutions, promotes impunity, undermines the rule of law and exacerbates inequality.”[3]

The Commission called for this hearing to monitor and address the situation in Haiti. The IACHR has a Special Rapporteur on Haiti, Commissioner Flávia Piovesan, and it has increased its engagement on Haiti in recent times. In February 2019, the IACHR issued a Press Release expressing its profound concern about the worsening violence and scarcity in Haiti, calling on the State to respect social protest.[4] In June, the Executive Secretary visited Haiti and met with civil society members and government officials to set the stage for further engagement in the country. Throughout this time, human rights advocates, including IJDH and BAI, have been calling for further engagement as the human rights situation becomes increasingly concerning in Haiti.