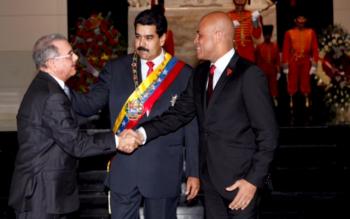 The Heritage Foundation came forward on September 20, 2018 to set the rules for Haiti’s PetroCaribe investigation and protests.  Most Haitians are delighted about any audit of the corrupt government that was foisted on them by the fraudulent presidential and legislative 2015-2016 elections. So no one asks where a private United States conservative think tank got the authority to demand a probe into a bilateral deal between Haiti and Venezuela, or to proscribe how Haitians conduct their protests.

This move by the Heritage Foundation came two months after the International Monetary Fund (IMF) recommended a hike in gas prices simultaneous with violent protests and popular demands for an audit into the PetroCaribe funds. Pundits declared that Haiti’s government would fall. But how could a government fall that was not standing in the first place? The July protests got out of hand and even rich Haitians like Reginald Boulos got hurt. So somebody was punished: namely, the Prime Minister, Jack Guy Lafontant, who resigned. In effect, one set of installed crooks was replaced by another. Funds from the Inter-American Development Bank (IDB), World Bank, and IMF have been stolen by Haitian officials for many years, but they appear to interest no one. About $9.5 billion of earthquake reconstruction funds disappeared in three years from Clinton’s I-HRC, but that is also forgotten.

The sudden acute interest in the PetroCaribe funds, which amount to about $1.7 billion that were embezzled over eight years but apparently not noticed until now, is all the more fascinating because it coincides with a grab of Haiti’s electric grid, attempts to extract mining concessions from Haitian officials, and importantly, efforts to garner Haiti’s support for an intervention of the Organization of American States (OAS) in Venezuela that would surely lead to massive bloodshed, followed by another acronym United Nations peacekeeping operation.

Curiously, the July protests were repeated on October 17 peacefully and with only male protestors between 16 and 30 years old. Are we to believe that women, who traditionally head most Haitian families, are uninterested in government fraud and less peaceful? I can certainly think of one Haitian institution that can quickly assemble as many as 16,000 young men…. But let us put aside these observations for a moment and pretend that all the protests are legitimate. If so, then it is reasonable to assume that, while angry Haitians were burning tires and hitting the pavement, the Heritage Foundation and its branch, Transparency International, were at a table making demands from the cornered Haitian crooks. Would they sign away Haiti’s electric grid and mining rights, implicate Venezuelan officials in the corruption, and join the move to condemn Venezuela’s elections if threatened with prison? The answer is a definite yes.

Corrupt or not, the downfall of Venezuela would be a tragedy for all Latin America and the Caribbean. I’ve said it before, but it bears repeating: when you march, make sure you know who is representing you inside in the negotiations, else you might discover too late that you were working against your own best interests.

The Heritage Foundation for Haiti (LFHH), a branch of Transparency International, urges Haitian officials to adopt measures for completion of the probe into PetroCaribe funds.

In a statement dated September 20, 2018 Heritage Foundation officials expressed concern about the ability of the Cour Supérieure des Comptes et du Contentieux Administratif (CSCCA) to perform this audit in a timely and effective manner, given the “limited means available to it, not only from the point of view of human resources but also financial resources.” They recommend that the government launch “as soon as possible a bid to recruit a local branch of an international audit firm to assist the court in this task and provide an additional guarantee of the audit’s independence.”

According to the Heritage Foundation, “once the audit into PetroCaribe expenditures is complete and the audit report provides evidence that corruption has taken place, the Anti-Corruption Unit (Unité de Lutte Contre la Corruption, ULCC) and the Central Financial Intelligence Unit (Unité Centrale de Renseignements Financiers, UCREF) may conduct their own investigations of the audit results to corroborate corruption (embezzlement, bribery, patronage, nepotism, money laundering, etc.), identify those responsible, and forward these conclusive files to the prosecutor’s office for the necessary follow-up and prosecution.”

Furthermore, the Haitian branch of Transparency International suggests that the Haitian President “solicit from the OAS, the United Nations Office of Drugs and Crime (UNODC), the states party to the Inter-American Convention against Corruption (IACAC), and the United Nations Convention against Corruption (UNCAC) their support in the detection and recovery of illegal earnings deposited in foreign accounts.”

Heritage Foundation officials are additionally concerned about the turn in the protest movement. They worry about “the political turn this movement has taken and the aggressive and vengeful character that is emerging, even though the CSCCA has not yet even finished its audit.”

They warn off “politicians and other opportunists who are determined to draw political capital and/or divert attention from their own acts of fraud and embezzlement by infiltrating this movement for surrender of the funds and remind them that the population is not fooled by these shenanigans and is keeping an eye on them.” They also warn off the eternal “agitators and powerful troublemakers” who work in the shadows and have infiltrated this popular movement to foment an unstable, violent and chaotic climate conducive to their own shady and criminal operations. Again, the population is not fooled and can identify the usual suspects.

In Haiti, the PetroCaribe program, which was supposed to finance social projects, amounts to about $1,705,423,180. From 2008 to 2016, more than 385 projects were financed by PetroCaribe funds under the governments of the six prime ministers: Michèle Duvivier Pierre-Louis, Jean Max Bellerive, Gary Conille, Laurent Lamothe, Evans Paul, and Enex Jean-Charles.