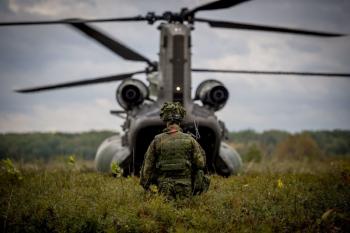 Ignored in the flap over the Halifax International Security Forum (HFX) awarding its dubiously titled John McCain Prize for Leadership in Public Service to Taiwan’s President, Tsai Ing-wen, is a potentially far more sinister factor: why are Canadian taxpayers helping to fund an international political forum which has been described by activists as a “conference of warmongers?”

More important still, why are the Department of National Defence (DND) and the Canadian Forces (CF) working so diligently to shape public attitudes and beliefs towards the military and its role in the world, going so far as conducting propaganda operations in the “pursuit of strategic objectives?”

Since the signing of a memorandum of understanding in 2017, DND contributes approximately $3 million per year to the HFX, which organizes an annual conference in Halifax featuring about 300 delegates including top military brass from more than 70 countries. The Washington-based organization also publishes reports that are regularly quoted in the dominant media.

But the federal government’s support for the HFX is just the tip of the propaganda iceberg.

For decades, public money has helped finance the operations of numerous military-friendly institutions including the Conference of Defence Associations, the Royal Canadian Military Institute, the Canadian International Council, the NATO Association of Canada, and the Canadian Global Affairs Institute, along with other groups and fora that support an expanded role for Canada’s military, particularly in response to so-called ‘adversary’ nations like Russian and China.

In addition to supporting think tanks that are regularly quoted in the mainstream media on foreign policy issues, DND protects its image and promotes its worldview through a history department, post-secondary institutions and media outlets, as well as by spending lavishly on war commemorations and cultural initiatives. It also employs hundreds of media relations officers.

DND—which, along with the Canadian Armed Forces constitutes the largest federal government ‘department’ in the country—also influences academic debate about military affairs. DND occasionally partners with universities on workshops and holds scholarly conferences such as the Royal Canadian Navy’s “Submarines in Canada: Past, Present and Future.”

Many university programs have been funded by DND’s Security and Defence Forum (SDF), established in 1967 to “develop a domestic competence and national interest in defence issues of relevance to Canada’s security.”

Adding to the military’s influence within academia is DND’s Directorate of History and Heritage, where official military historians have published dozens of volumes, dominating academic discussion of war in Canada for decades. With a 50-person staff, the Directorate is “mandated to preserve and communicate Canada’s military history and foster pride in a Canadian military heritage.”

There are also more than 60 accredited CF museums that receive financial assistance from Ottawa. According to CF Administrative Order 27-5, “the role of CF Museums is to preserve and interpret Canadian military heritage in order to increase the sense of identity and esprit de corps within the CF and to support the goals of the Department of National Defence.”

In addition to what’s described above, the CF spends hundreds of millions of dollars annually on public relations and military commemorations. All told, the armed forces have about 600 staff members working solely on communications and commemorative events.

A 2013 document obtained through an access to information request shows DND has “over 13 independent public affairs organizations” and its “sprawling media relations machine keeps tabs on tens of thousands of newspaper articles a year, handles thousands of media requests, and has kept a close eye on coverage and public criticism of its many procurement projects.”

Without question, the CF and DND operate the largest public relations machine in the country. In addition to the ideological influence of their massive bureaucracy, DND also spends tens of millions of dollars each year on “arms-length” institutions and outside initiatives that promote its interests.

This begs the question: has the military ever consulted with the public about their propaganda efforts?

My guess is most Canadians would be against the military spending millions of taxpayer dollars on a hawkish Washington-based forum. A similar proportion would likely also be opposed to plowing tens of millions into think tanks, university programs and other initiatives seeking to convince Canadians of the CF’s role in global affairs.

Indeed, if given a choice, the vast majority of Canadians would probably disagree with the military spending large amounts of public money to persuade us of their perspective. What have they got to hide?