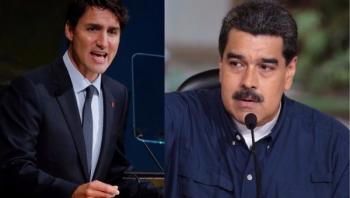 The two high-profile activists were among 154 signatories of an open letter to the Washington and Ottawa governments urging them to reconsider recent measures to pressure President Nicolas Maduro’s administration.

The United States and Canada have slapped individual sanctions on a handful of Venezuelan officials, including Maduro, over accusations of corruption, democratic abuses and human rights violations.

The measures include freezing assets and preventing U.S. and Canadian nationals from dealing with them. The U.S. government has also imposed financial measures, intended to stop Venezuela from contracting new debt, and is considering oil sanctions.

While critics say sanctions are aimed only at Venezuela’s “dictatorship”, Maduro says they are part of an international right-wing conspiracy intended to topple him and take control of the OPEC nation’s oil wealth.

“We are deeply concerned by the use of illegal sanctions, whose effect falls most heavily on the poorest and most marginal sectors of society, to coerce political and economic change in a sister democracy,” the letter said.

“Sanctions merely complicate efforts by the Vatican, Dominican Republic, and other international actors to mediate a resolution to the deep polarization in Venezuela.”

Former Venezuelan leader Hugo Chavez used to enjoy high-profile support from a raft of leftist personalities, but his successor Maduro has seen foreign opinion harden against him, particularly during opposition protests last year.

“It is no secret that Venezuela — unlike Mexico, Honduras, Colombia, Egypt, or Saudi Arabia — is targeted for regime change by the U.S. precisely because of Venezuela’s leadership in resisting U.S. hegemony and the imposition of the neo-liberal model in Latin America,” the activists’ letter said.