Home: From Displacement Camps to Community in Haiti 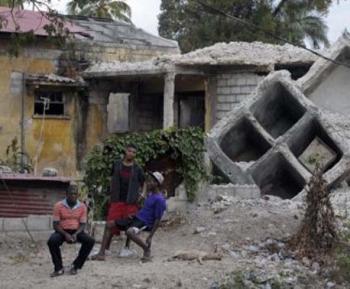 By Alexis Erkert and Beverly Bell

Published on Other Worlds, January 4, 2012 (see author bios below)

As 2012 begins, a growing movement of displaced people and their allies in Haiti is actively claiming the right to housing, which is recognized by both the Haitian constitution and international treaties to which Haiti is signatory.

Haitians displaced by the earthquake two years ago face many crises, but perhaps none worse than ongoing homelessness. One of the 520,000 people still living in displacement camps, [i] Dieula Croissey describes conditions where she lives in Cité Soleil: “We’re living in insecurity, our lives are threatened, our daughters are used.” In addition to insecurity and violence, especially against women, people living in camps face deteriorating shelter materials – shredding plastic tarps and tattered tents – hunger, and lack of adequate water or toilets. Despite Haiti’s declining rates of cholera infection,[ii] the dearth of sanitation options leaves real risk for contracting the disease.

Meanwhile, reconstruction projects, especially permanent housing projects, have been slow in materializing. According to figures furnished by UN-HABITAT, only 13,000 houses have been repaired and 4,670 permanent homes built for the more than half a million people originally displaced. Though current numbers are hard to come by, approximately 100,000 temporary shelters have also been built.[iii] Tiny (less than 100 square feet for an entire family), with few windows, and usually made of untreated plywood or heavy plastic sheeting, these do not provide a long-term solution for people in need of housing.

The first step toward a real solution, according to the housing movement, must be development of a comprehensive national housing policy by the government, with broad input by displaced people themselves. Currently, no such policy exists; instead, homeless people’s fates are in the hands of piecemeal efforts from groups ranging from respectful community churches to profit-motivated businesses. One component of a national policy is that the government begin invoking eminent domain, exercising its right (guaranteed by a Decree on the Recognition of Public Interest in 1921) to claim private property for public use.

The second urgent need, activists say, is for the government to create public housing on the claimed land. The governmental Public Office for Public Housing Promotion (EPPLS by its French acronym) exists for this purpose, but currently has no budget or authorization to move forward. Housing activists stress that the residences built must be safe; have access to roads; provide water, electricity, and sewage; offer community and recreational spaces; be accessible to people with disabilities; and provide women with equal access.

The housing rights movement is also calling on the government to:

While urging systemic and legislative solutions, Haiti’s right-to-housing movement is also constructing transformative paradigms of housing and community. This is especially important because what little housing has been created since the earthquake has largely missed the mark in terms of need. Colette Lespinasse, director of the Support Group for Repatriates and Refugees (GARR by its French acronym) says, “What we were seeing in terms of housing plans has come largely from foreigners, with proposals for pre-fabricated houses that responded more to the interests and needs of businessmen. In general, the proposals don’t correspond to Haitian culture or our climate, and also don’t give people a chance to learn techniques themselves that they can use to continue building on their own.”

In public forums and in interviews, women in camps make a distinction between housing and homes. They point out that while lodging can provide a roof over their heads, what they want is a nurturing space that is free of violence, where the common good is prioritized, and where power dynamics between men and women can shift. In the absence of initiative by the government, some Haitian non-profit and human rights organizations have stepped out of their normal missions to provide different kinds of housing. They have teamed up with local communities to create do-it-yourself solutions. They hope to inspire others, including their government, to envision and to dare to create viable community spaces with local participation.

Colette says, “You can’t just denounce what you don’t want. We’re meeting with others, as well as drawing inspiration from housing movements, networks and cooperatives in other countries. We want to propose alternatives that our country’s leaders could use as models.”

In one of these alternatives, the peasant support group Institute of Technology and Animation (ITECA) in Gressier, 90 minutes or so west of Port-au-Prince, is building 1,700 permanent homes for residents who lost theirs, in an approximately ten square kilometer area. With funding from Caritas Switzerland, the houses offer water and electricity, almost unheard of in the countryside, and moreover in environmentally low-impact ways - through a rainwater collection system and solar panel on each roof. Each is equipped with an outdoor latrine. They are earthquake and hurricane-resistant and use local building materials, like stones, to the degree possible. Another rare feature is that the home-owners themselves do all of the work that doesn’t require specialized skills. ITECA is also working with the mayor to ensure that each owner will receive proper land and housing titles.

Chenet Jean-Baptiste, director of ITECA, explains, “We aren’t building houses to meet a need for housing, but rather as a work of community process. For us, housing is an entry point for re-organizing concepts of land ownership and social and economic relationships. Our fundamental mission is to accompany communities and encourage them to become principal agents of change. After all, what’s the point of giving someone a house only for them to die of hunger inside it?”

A second initiative is GARR’s dream to create land and housing cooperatives. The vision springs from a 40-year-old experiment in Uruguay, where 25,000 members of housing cooperatives manage their housing and land communally. It is also reminiscent of land reform communities in Brazil and elsewhere. In this model, according to Colette, “the very poor pool their money together and pull their internal resources to resolve their own problems, to find land and care for the land together. Everyone is responsible for the community.” GARR has started two model cooperatives, made up of 42 families on the Haitian-Dominican border. One is a landowners’ cooperative where families with small properties merge their properties to manage together. The second is cooperative housing, on land donated by the government. With assistance from Christian Aid, GARR has constructed 15 out of 40 projected houses on this land. The visionaries hope that the cooperatives will continue to grow and that “villages of life” will evolve, thriving communities with on-site or nearby clinics and schools, and job opportunities in agriculture or small business.

In Cap-Rouge, in South-eastern Haiti, the Haitian Platform to Advocate Alternative Development (PAPDA) is working together with an organization called Hope for the Development of Cap-Rouge (VEDEK), to repair 500 destroyed homes using local building materials. According to Franck St. Jean, coordinator of PAPDA’s Food Sovereignty Advocacy Program, core principals of the project include strengthening local wisdom, culture, and economy; conserving biodiversity; and empowering community. Though currently funded by European non-profits, PAPDA and VEDEK are ultimately trying to create a model that doesn’t depend on external funding or knowledge.

Similarly, the Support Group for Rural Development (GADRU) is repairing homes around the towns of Carrefour and Kenscoff in Haiti’s western province. Their objective? To promote community development wherein konbits, or volunteer, collective labor teams, of 10 families each build one another’s homes. GADRU, too, is working with local construction techniques and materials – wood, stone and earth – and designing the homes to withstand natural disasters.

As with every other element of reconstruction from the earthquake, displaced people and grassroots organizations are insisting that they must have input in developing solutions. Calling on the Haitian government to provide a comprehensive solution to the housing crisis, they are also paving the way with participative models of what that solution could look like. Reyneld Sanon of the Force for Reflection and Action on Housing (FRAKKA) says that people have to be part of planning the reconstruction of “their neighborhoods, of their cities, of their country, and of their dignity.”

“People have needs and they have ideas, they have visions for the way that houses can be built,” he said. “Go into a camp, and ask any child to make a drawing that shows what kind of house they want to live in. And you’ll see. You’ll see. Even children have ideas and ideals.”

Alexis Erkert is the coordinator for 'Another Haiti is Possible' project of Other Worlds. She has worked in advocacy and with Haitian social movements since 2008. You can access all of Other Worlds’ past articles regarding post-earthquake Haiti here: http://www.otherworldsarepossible.org/Haiti.

Beverly Bell has worked with Haitian social movements for over 30 years. She is author of the book Walking on Fire: Haitian Women's Stories of Survival and Resistance and is working on the forthcoming book, Fault Lines: Views across Haiti’s New Divide. She coordinates Other Worlds, which promotes social and economic alternatives. She is also associate fellow of the Institute for Policy Studies.

Protest March on January 11, 2012 Will Demand Action on Land for Peasants
and Housing for Earthquake Victims


Agence haitienne de presse reports on Dec 28 that a protest march to take place on January 11, 2012 has been called by 12 organizations to demand land and housing rights in Haiti. The march will take place in Port au Prince and finish in front of the national Parliament. The organizations that have called for the action are the following: