In honor of Black History month, Canada should end its support of authoritarianism in Haiti 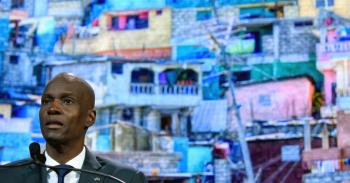 A meaningful way to honor Black History Month is by questioning Canada’s role in a country born in struggle to make Black Lives Matter. In Haiti today Ottawa is supporting a government that is reviving the specter of the infamous Papa Doc and Baby Doc Duvalier dictatorship.

More than two centuries ago Africans in Saint-Domingue rose up against the most barbaric of all the slave economies to become a beacon for Black liberation. Over 13 years they freed themselves, defeating multiple colonial powers including a British force led by Toronto icon John Graves Simcoe. The Haitian Revolution represents what may be the greatest example of liberation in the history of humanity, abolishing slavery three decades before Canada and six decades before the US.

There is a different kind of resilience emerging in Haiti today. Unfortunately, this time, it is the fortitude of a reactionary elite—that should have long been discredited—when supported by Washington and Ottawa.

Canada funds and trains a police force that has violently repressed anti-Moïse protests with the Canadian ambassador repeatedly attending police functions and refusing to criticize their repression.

Neo-Duvalierist President Jovenel Moïse, who should be leaving office February 7, looks set to extend his term in defiance of the constitution and popular will. After surviving 18 months of massive protests and strikes spurred by a huge corruption scandal Moïse has consolidated his grip during the pandemic. In the summer he forced out the entire electoral council and instigated a gang alliance to instill fear in the slums of Port-au-Prince. Soon after parliament was disbanded because he failed to hold elections, Moïse began to rewrite the constitution in violation of the law. Over the past few months he has released presidential decrees criminalizing protest blockades as “terrorism” and establishing a new intelligence agency empowered to infiltrate and arrest anyone engaged in “subversive” acts or threatening “state security.” The new agency may become analogous to the Duvalier dictatorship’s infamous Ton Ton Macoutes.

Canadian officials have barely criticized any of Moïse’s authoritarian measures. On the contrary, Ottawa has backed Moïse at almost every turn. During a week-long general strike in February 2019 and an even longer one in October Canadian officials publicly backed the president. Canada funds and trains a police force that has violently repressed anti-Moïse protests with the Canadian ambassador repeatedly attending police functions and refusing to criticize their repression.

Alongside the US, France, Germany, Brazil, Organization of American States (OAS), UN and Spain, Canada is part of the “Core Group” of foreign ambassadors in Port-au-Prince generally believed to be the real power behind Moïse. Last year Radio Canada’s flagship investigative program Enquête pointed out that the Core Group was spawned at the “Ottawa Initiative on Haiti”. On January 31, 2003 the Canadian government convened top US, French and OAS officials to discuss Haiti’s future. No Haitian officials were invited to the secret two-day meeting where they discussed the removal of the elected president and putting the country under UN trusteeship.

On the final day of Black History Month not long after the country celebrated the 200-year anniversary of the Haitian Revolution US Marines forced President Jean-Bertrand Aristide out of the country in the middle of the night. Canadian JTF2 special forces “secured” the airport from which Aristide said he was "kidnapped." A 15-year UN occupation of the country began.

Last year Bloc Québécois MP Mario Beaulieu sponsored a parliamentary petition calling on the federal government to “publish all documents relating to the ‘Ottawa Initiative on Haiti’” and to “hold a hearing of the Standing Committee on Foreign Affairs and International Development to learn everything there is to know about the ‘Ottawa Initiative on Haiti,’ including its link to the ‘Core Group.” The petition gathered the signatures required to be presented in parliament but was sideswiped by the global pandemic. Opposition parties should press the matter.

Rather than just words acknowledging structural racism, Ottawa must take action that improves the lives of long-marginalized Black people.

This week protests and a general strike are planned in Haiti to oppose Moïse’s bid to extend his mandate. The opposition has largely united behind a proposal for a caretaker government to oversee elections.

To commemorate Black History Month the Canadian Foreign Policy Institute has launched a letter writing campaign to new Foreign Minister Marc Garneau asking him to reset Canadian policy towards a country that did so much to make Black lives matter.

Rather than just words acknowledging structural racism, Ottawa must take action that improves the lives of long-marginalized Black people. At the international level a good place to begin would be ending Canada’s support for the revival of Duvalierism in Haiti.

Bianca Mugyenyi is an author and former co-executive director of The Leap. She currently coordinates the Canadian Foreign Policy Institute. She is the co-author with Yves Engler of Stop Signs: Cars and Capitalism on the Road to Economic, Social and Environmental Decay.