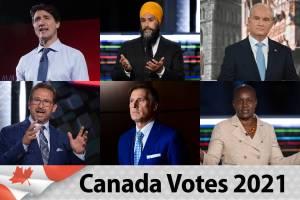 Of course, when it came to international and military affairs the vote had little upside. All the parties with a chance of winning seats in Parliament promote a corporate, military and Washington-centred foreign policy. But a Conservative victory would have made things worse. At least in theory, a minority Liberal government dependent on the NDP or Bloc Québecois offers greater opportunities for social movements to impact policy.

In a clear loss for internationalists, Paul Manly lost in a tight three-way race in his Vancouver Island riding of Nanaimo-Ladysmith. Probably the best MP on international and military affairs, Manly backed numerous important parliamentary petitions, public letters and events on military and international issues. His defeat was largely due to the staggering meltdown of the Green Party vote (more below).

On the positive side, the best NDP MPs on foreign policy were all re-elected. Leah Gazan, Matthew Green, Alexandre Boulerice and Niki Ashton have all supported internationally focused initiatives or events most of the NDP caucus shunned.

It’s disappointing that Avi Lewis and other more internationalist minded NDP candidates failed to win seats. It’s also unfortunate that staunch anti-Palestinian and militarist MP Randall Garrison was re-elected. Hopefully, the election will prompt a reshuffling of the NDP shadow cabinet and Garrison will be removed as NDP defence critic. He is a staunch proponent of spending $100 billion ($350 billion over their lifecycle) on new naval vessels and fighter jets designed to participate in US and NATO wars. If he does remain defence critic Garrison needs to be pressed to uphold party policy concerning the F-35, which is the fighter jet the Liberals are most likely to select. Garrison and the NDP need to restate — clearly and directly – that they oppose purchasing the F-35.

One of the most consequential foreign policy story lines from the election is that anti-Palestinian extremism has a high cost on the left. Green Party leader Annamie Paul came an embarrassing fourth in her multiracial riding of Toronto Centre. She did far worse than during the by-election just after she became party leader a year ago and despite the climate crisis receiving greater attention the Green vote dropped from 6.55% in 2019 to 2.32% nationally. The staggering decline is largely due to Paul’s refusal to repudiate her senior adviser Noah Zatzman who claimed that Green MPs standing up for Palestinian rights had engaged in “appalling anti-Semitism”. Paul’s handling of Zatzman’s outrageous Facebook post threw the Greens into a public crisis that was entirely foreseeable. But Paul was blinded by an anti-Palestinian pathology and a general pro-imperialist ideology. Her removal as a party leader paves the way for an internationalist, eco-socialist candidate such as Dimitri Lascaris, to lead the Greens.

It’s also a positive development from a Palestinian perspective that former Green, turned Liberal, MP Jenica Atwin, won her seat in Fredericton. Despite the Israel lobby and Liberals trying to depict otherwise, Atwin didn’t really walk back her statement that Israel was an “apartheid” state, which is part of what unleashed Zatzman’s rage.

A number of candidates who supported the “Vote Palestine” campaign were also elected across the country.

Regarding China there was at least one important development. Since launching his bid to lead the Conservatives Erin O’Toole has taken an extremely hawkish position against that country. The Conservative election platform referred to “China” 31 times and “Chinese” 10 times. By comparison Saudi Arabia is not mentioned once, which is far more authoritarian at home and violent in its region. The Conservative platform also included a list of 20 different actions they would take against China.

These extreme positions may have cost the Conservatives two incumbent MPs in the majority Chinese Canadian Vancouver suburb of Richmond. It is unlikely that media outlets pushing Canada to join the US-led Cold War against China will explore the issue, but there should be a careful look at voting outcomes in these and other heavily Chinese Canadian ridings. Despite the media boosting shrill community voices looking for conflict, most Chinese Canadians oppose a hostile posture towards the world’s most populous nation.

While the foreign policy status quo prevailed, the election did prove many Canadians care about their country’s role in world affairs.