How the Miami Herald manufactures consent for continued U.S. destabilization in Haiti 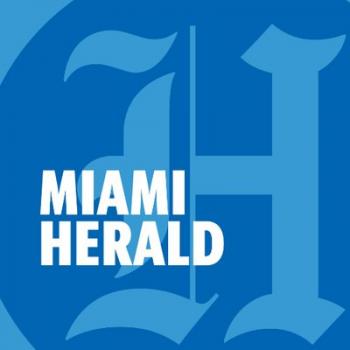 The Miami Herald's editorial board released an opinion on Tuesday that, whether intended or not, will serve to give consent for continued U.S. intervention and destabilization in Haiti. The woeful opinion signed only by "The Miami Herald Editorial Board" directly opposes the overwhelming opinion and demands of Haitians and Haitian-Americans who have been calling for a suspension of U.S. diplomatic relations with Haiti.

The opinion editorial was contradicting within itself. It made bigoted and prejudicial statements based on false pretexts and the ignorance of the average reader on the subject. The Herald's piece has forced commentators on Haitian radio for the past few days to consider The Miami Herald a dangerously uninformed newspaper or playing a role in the destabilization efforts alleged to be attibuted to the U.S. Central Intelligence Agency and a long-standing U.S. policy of racism towards Haiti.

The Herald opinion comes at a time when, Haitians and Haitian-Americans have been calling for the U.S. to suspend diplomatic relations with Haiti so the country and its leaders can resolve a wholly political crisis. The Herald's editorial makes no mention of the position of the Haitian people despite having quoted community leaders, as recently this past November, telling Speaker Nancy Pelosi and Rep. Frederica Wilson these very things.

Haiti's Jovenel is already an autocrat and the U.S. made it happen

With the title "Haiti's Jovenel could turn into an autocrat. The U.S. can't let that happen", The Miami Herald is effectively gas-lighting readers into firstly, believing that Jovenel Moïse is not already an autocratic dictator. Something so fundamental, with long-ranging ramifications and seriousness, is not suffering from a subtle issue of distinction here. This is a fraudulent characterization of situation in Haiti.

Jovenel Moïse has suppressed anti-government demonstrations in Haiti by leading a regime that human rights organizations and the United Nations charge with massacring hundreds of its people. He declared the Haitian Parliament defunct via Twitter in January and rules by decree.

There is already an autocrat in Haiti and The Miami Herald editorial board, in its state of being uninformed, incompetent or in an effort to deceive, contradicts its conclusion by then writing:

Moïse is carrying out one-man rule — badly. He is ruling decree. He is confiscating private property and canceling government contracts. He has constitutional “reforms” in his sights and, in a push to reform the energy sector, is trying to arrest private power providers.

The Miami Herald also wants to have its readers believe that the U.S. had nothing to do with the installation of Jovenel's totalitarian regime and that they must now do something to stop it.

The Herald only has one reporter for Haiti despite the country's population being among the largest in the Caribbean with ex-pats heavily residing in South Florida the center of the newspaper's print circulation. Just one reporter and this one reporter cannot be expected to cover every important story out of Haiti. That is too much to ask.

However, U.S. officials have held thousands of bilateral meetings with Haiti's officials over the past two years, dozens of high-level missions have been in the country, the U.S. Ambassador meets and dictates every branch and institution of the country. The U.S. has earned the characterization of not just maintaining diplomatic relations with Haiti, but being occupiers of the country.

It's disengenous, not incompetence, that The Miami Herald would try in anyway to make it appear that the U.S. does not bear direct responsibility for the situation in Haiti and has lost the credibility to solve it.

Haitians and Haitian-Americans have called on the United States government to suspend diplomatic relations with Haiti in order to allow Haitians the space to resolve a deep and wholly political crisis. The continued presence and involvement of the U.S. in Haiti prolongs and deepens the crisis and will only lead to more death.

The Haitian people need their friends in Latin American, the Caribbean and in the international press to stand with them in demanding a suspension of U.S. diplomatic relations with Haiti and its totalitarian regime.