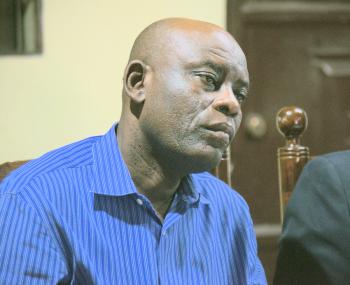 Pierre Espérance of the RNDDH claims that Jimmy Cherizier was planning to attack his Port-au-Prince office. Photo: Milo Milfort/Haïti Liberté

Gun battles between gangs and sometimes with policemen raged for several days this past week in downtown Port-au-Prince, resulting in five dead and nine wounded, according to Jimmy “Barbecue” Cherizier, the spokesman for Haiti’s principal alliance of armed neighborhood organizations.

Videos which went viral on social media showed two men lying dead in the streets of the Rue Saint Martin neighborhood, which is immediately across the capital’s main thoroughfare (Avenue Jean-Jacques Dessalines) from the slum of La Saline. After the two men were killed in street fights, residents could not retrieve their bodies for hours due to gunfire.

Rue Saint Martin is home to the Krache Dife (Spit Fire) gang headed by Wilson Pierre alias Ti Sonson. There were rumors that the gang, which is a member of Cherizier’s G-9 Family and Friends alliance, had attacked the local police station and killed three police officers, then carried out a vodou ritual with one of the bodies. Cherizier dismissed the rumors as “completely false.”

Meanwhile, Pierre Espérance, the head of the National Network for the Defense of Human Rights (RNDDH), claimed that Cherizier had threatened to kill him and attack his office, located in the relatively upscale neighborhood of Bois Verna.

“I understand gangs are menacing the office of @RnddhAyiti, a critical human rights organization in Haiti,” tweeted Rep. Andy Levin (D-MI) on Jun. 14. “I am working urgently to learn more & praying for the safety of any employees who may be inside.”

But Cherizier says that Espérance is lying and has done so previously.

“I’ve never threatened him,” Cherizier replied when questioned by Haïti Liberté on Jun. 15. “I’ve never done anything of the sort. The guy is afraid because of the loads of lies he has made up about me, and he sees that on the social media networks people are saying: ‘If Barbecue was a bandit, he would have killed Pierre Espérance already because it is Pierre Espérance who put him in everything that he is in now…’ Those types of comments by people on social media ignited his imagination, freed his imagination, to now try to make people think that I wanted to kill him.”

Over the past four years, a bitter feud has grown between the two men, with Espérance writing several reports and giving many interviews accusing Cherizier of human rights crimes. Cherizier has dismissed the reports as wrong, unfounded, and dishonest, even charging that Espérance recruited false testimony from residents of La Saline to smear him.

“This isn’t the first time this guy has done this to me,” Cherizier said. “In 2019, Espérance put out a first report which said that the Interior Minister gave me lots of money to assassinate him. But that report didn’t stand up [to scrutiny]. Now he has put out another report which says that I have a mission to set fire to RNDDH’s office and to kill him. There is nothing anywhere that proves that I ever said anything like that. I am fighting politically. The idea of killing Pierre Espérance has never entered my head.”

Yet another rumor this week alleged that Cherizier and Jean Emilio Micanord, a leader who controls the area of Cité Soleil known as Wharf Jérémie, had their backs to the wall after the attacks of hostile gangs and were ready to leave the G-9 alliance to make peace with a smaller rival alliance known as G-Pèp, established in response to the G-9 by gang leader Jean Pierre Gabriel, who controls much of Cité Soleil. Gabriel’s soldiers have been part of the assaults from Belair on Cherizier’s Delmas 6 neighborhood in recent days and previous months, Cherizier has charged.

However, there is no rapprochement in the works between the G-9 and G-Pèp, Cherizier says. He is bitter towards the Haitian police, who have been fighting with the G-9 groups but not the G-Pèp ones, according to him.

The violence which erupted at the beginning of June when unfederated gangs in neighborhoods like Grand Ravine, Village de Dieu, and Belair launched an offensive against G-9 neighborhoods has forced nearly 8,500 women and children to flee their homes in just two weeks, UNICEF said in a Jun. 14 press release.

“The capital city is now facing an urban guerrilla, with thousands of children and women caught in the crossfire,” said Bruno Maes, UNICEF Haiti Representative, estimating that hundreds of houses have been burned down or damaged. “The displaced families I’ve talked to have lost everything and urgently need clean water, food, personal hygiene items, mattresses, blankets and clothes.”

In the past nine months, violence resulting from Haiti’s political turmoil has displaced over 13,900 people in Port-au-Prince, according to the UN office in charge of humanitarian coordination (UNOCHA), with some 650,000 affected by displacement across Haiti.

Haiti’s violence is scaring young people, some of whom are not going to school, a May UNICEF survey suggests.

At the beginning of the month, Cherizier attempted to salvage the truce between Port-au-Prince’s gangs in the alliance and those that are not. The cease-fire had lasted since the G-9’s founding last summer.

“We in the G-9 are for nothing other than peace,” Cherizier told Haïti Liberté. “We want peace.”