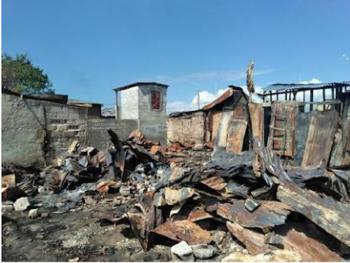 The Bureau des Avocats Internationaux (BAI), a Haiti-based human rights law firm, together with its U.S.-based partner organization, the Institute for Justice and Democracy in Haiti (IJDH), announced Aug. 13 a petition to the Inter-American Commission on Human Rights (IACHR) for an emergency response to protect the survivors of the November 2018 massacre in the La Saline (Lasalin, in Kreyòl) neighborhood of Port-au-Prince. This petition requests “precautionary measures” under IACHR protocols to safeguard and protect human rights in member countries of the Organization of American States (OAS).

Reports from the UN’s mission in Haiti (MINUJUSTH) and the Office of the United Nations High Commissioner for Human Rights (OHCHR) and Haiti’s National Human Rights Defense Network (RNDDH) confirm that armed gangs brutally murdered La Saline residents, including women and small children, in an hours-long massacre; RNDDH reports confirm at least 71 fatalities. BAI and IJDH have requested that the IACHR adopt measures compelling the Haitian government to provide urgent humanitarian assistance to survivors displaced by the massacre, improve security in La Saline and the surrounding neighbors where survivors have fled through increased police presence, and address delays that have hampered access to justice for victims. The request to the IACHR was filed Aug. 9, 2019.

“Before he was assassinated, it was my son who supported me financially,” explained one of the petitioners, who has been living in an open-air market without assistance since she fled the massacre. “Additionally, I lost everything the day of the massacre: my furniture, my business, my cooking utensils. Now I beg with humiliation for a piece of bread to give my children.”

Investigations by RNDDH and international journalists further suggest that the massacre was carried out with the complicity of Haitian government actors, in retaliation for the neighborhood’s involvement in Haiti’s national anti-corruption movement. Over the past year, a growing popular movement has mobilized protests calling for government accountability and structural reform, following reports from Haiti’s Senate (2016, 2017) detailing the misappropriation of an estimated $1.7 billion of state funds intended for investment in critical infrastructure and social services. A report by Haiti’s Central Directorate of Judicial Police directly implicated two senior government officials in the Massacre; Director-General of the Ministry of Interior, Fednel Monchéry, and President Moïse’s direct representative to the Port-au-Prince region, Joseph Pierre Richard Duplan. Despite the Judicial Police report recommending their arrest, neither man been arrested nor suspended from his post.

“For nine months President Moïse has failed to publicly condemn the massacre, and his administration has failed to provide assistance to victims, prevent continued violence in La Saline, or hold those responsible accountable, including officials within his own government,” said Mario Joseph, Managing Attorney of the BAI, which also represents survivors of the massacre in Haitian court proceedings. “There is strong evidence of state involvement, and the failure of the Government to respond shows contempt for the human rights of the people of La Saline.  The Haitian Government is in clear breach of legal obligations under the 1969 American Convention on Human Rights, and the duties it defines for hemispheric state actors to uphold the essential rights of their citizens. We call on the Inter-American Commission to act urgently to protect survivors from further harm.”