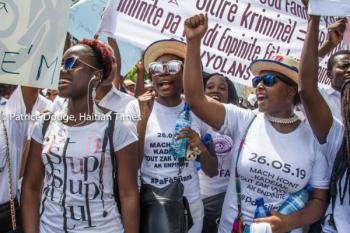 On May 26, hundreds of people took to the streets in Port-Au-Prince to protest against the recent gang-rape of two university students. The crowd, dressed in white, left the university campus where one of the recent victims of gang rape is currently studying, and walked to the city center, passing by the scene of the attack. Screaming loudly, as if to imitate the cries of victims, the march brought men and women together to demonstrate and voice their anger.

“There comes a time when enough is enough,” said Marie Noel Fequiere, who took part in the march.

“Every time a woman is raped, it’s the dignity of a mother, sister, wife that is stepped on,” said demonstrator Denester Wilson.

“The new wave of violence, murder, and rapes throughout Haiti has become unbearable,” added another protester, Angelo Dautel. “I salute the courage of these women who have come forward to denounce these barbaric behavior. I came out today to make noise and make it clear it’s totally unacceptable. ”