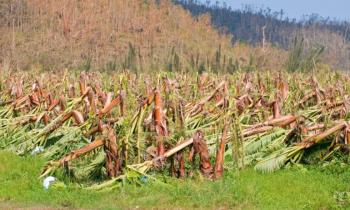 Hurricane Irma brought severe damage to the Caribbean in early September, destroying buildings, homes, roads, and threatening livelihoods before moving north towards the Florida Keys. The Category 5 storm left 17,000 struggling for adequate shelter and 70 to 90 percent of infrastructure destroyed on some islands. The storm also contaminated drinking water sources and destroyed food infrastructures and agricultural production.

The Food Security Cluster (FSC)—a collaborative group for strategic food humanitarian response including international NGOs, United Nations organizations, Governments, and the Red Cross and Red Crescent—is continually assessing the Irma response and recovery priorities. Water and sanitation kits as well as canned food and seeds and agricultural goods were among FCS’s key priorities early in the response. FSC has since estimated in its Regional Response Plan that among all sectors food security require the third largest amount of funding to December: nearly US$2.4 million.

According to FSC and the Caribbean Disaster Emergency Management Agency (CDEMA), sufficient access to food and clean drinking water are still concerns. Despite stocking islands like Haiti, Curacao, and St. Martin with emergency food stores during storm preparation, some Caribbean islanders remain food insecure, at least temporarily. In areas with destroyed infrastructures, particularly where roads were destroyed, delivery of emergency food and water to vulnerable populations by land is difficult.

Formal assessments of food insecurity and agricultural damage by WFP and the U.N. Food and Agriculture Organization (FAO) are not yet complete, but the agencies have appealed for funding and planned their joint approach to mitigating food insecurity.

Increases in long-term food insecurity and recovery of agricultural livelihoods are also of concern. In Haiti, Cuba, and the U.S. Virgin Islands, significant agricultural damage has been reported. This includes destruction of agricultural fields, banana plantations, livestock, poultry farms, and sugarcane crops. According to FCS, “while not yet quantifiable, the impact on tourism,  fishery, and agriculture is severe.”

For some Haitian farmers, Irma brings another year of major losses. Beginning in 2014, Haitian agricultural productivity entered hardship due to El Niño drought conditions, cutting crop production in half in some regions and contributing to a rise in food insecurity. Nearly one-third of the population was classified as food insecure in early 2016.

Ninety percent of crops were then damaged by Hurricane Matthew in October 2016. In the southwestern peninsula, Matthew’s destruction of mature fruit trees was particularly devastating, and officials have estimated that it could take a decade or more for this agricultural-dependent region to economically recover.

“The vicious cycle of disaster upon disaster in Haiti is making Haitians poorer—and not just farmers,” economist and former Prime Minister Fritz Jean told The Miami Herald. Without agricultural productivity, farmers cannot feed their families, cannot sell crops at market, and cannot put money back into their communities. In Haiti, where half of the working population was employed by agriculture in 2015, these climate events have exacerbated food insecurity and poverty.

While assessments of infrastructure damage, food access, and negative effects on the agricultural sector will continue, Haiti’s northwest region in particular is an example of consecutive natural disasters exacerbating the vulnerability of already vulnerable peoples. FSC specifically addressed the situation in Haiti in its Response Plan, explaining that “while Haiti did not receive the full brunt of the hurricane, additional humanitarian needs have been identified,” which its current humanitarian response will need to address.

After the immediate emergency response is complete throughout the affected Caribbean regions, further assessment and planning of resilience-building activities will take place. The FAO Sub-Regional Caribbean Office, for example, says it will “assess the impact on fisheries and agriculture, and pave the way for recovery of livelihoods and adequate food and nutrition.” WFP reinforced its commitment to  “working with at-risk communities to prepare against future disasters through early warning systems, infrastructure improvements, and innovative partnerships.” With its three-month Regional Response plan, FSC aims “to cover the emergency needs of the most vulnerable populations while laying the foundation for a strengthened resilience by ‘Building Back Better.’”

In response to Hurricane Irma, French President Emmanuel Macron urged that the world must act now for climate change mitigation “so we can avoid such natural disasters in the future.”

Rocco is a research intern for Food Tank. A native of Wisconsin, she earned a BA in history from Dartmouth College and later a Masters in Public Health from the Tulane University School of Public Health and Tropical Medicine. At Tulane, she studied Global Community Health and Nutrition with an emphasis on food security and nutritional assessment.

After a short time with the United Nations World Food Programme, Rocco returned to New Orleans where she is leading an evaluation of sports-based youth development programs for underserved youth.