If Haiti’s government does not confront poverty, corruption, more unrest will follow 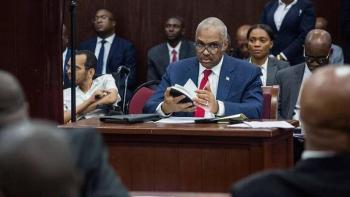 Saturday’s resignation of Haiti’s Prime Minister Jack Guy Lafontant, along with the suspension of controversial fuel price rises, will bring temporary respite from the latest social unrest in the country. But they will not resolve the problem underlying the protests — the Haitian people’s inability to demand better governance and basic services from its leaders.

In a 1962 speech to the Organization of American States, President Kennedy urged the United States and “those who possess wealth and power” in the hemisphere’s less wealthy nations to enact reforms to allow the people of the Americas “to hope for a suitable standard of living.” Kennedy famously warned that. “Those who make peaceful revolution impossible will make violent revolution inevitable.”

We did not need last week’s images of angry protests and burning cars to know that, half a century later, a suitable standard of living is beyond most Haitians’ hopes. A drive through Port-au-Prince reveals shocking levels of poverty. In Haiti, 80 percent of the people live on less than $2 a day, which would buy a half-gallon of gas.

Haiti’s poverty, like the fuel-price increases, is the product of decisions made by those who possess wealth and power in Haiti and abroad — with a stunning absence of input from the majority of Haitians who are poor. The crippling fuel increases — between 38 percent and 51 percent — were imposed in February by the International Monetary Fund (IMF) as a condition of its bailout of Haiti’s government.

The price increases came amid a long series of corruption scandals under current President Jovenel Moïse and his predecessor Michel Martelly that have diverted hundreds of millions from government services to the pockets of leaders and their associates.

A week before Moïse’s February 2017 inauguration, Haiti’s independent anti-corruption agency reported his frequent, large — $40,000 — and unexplained cash transactions that looked a lot like money laundering. Moïse illegally fired the agency’s head, which ended the inquiry. Revelations of up to $2 billion in theft from the PetroCaribe fuel assistance from Venezuela have rocked the country, with no visible consequences to the thieves. A few days before the massive protests, a prosecutor ordered the police to destroy houses —without the required court order — on land next to Moïse’s personal home where he wants to build an access road and helipad.

The United Nations refuses to fulfill its legal obligations to the victims of the cholera epidemic, introduced by its peacekeepers and that has killed more than 10,000 Haitians. Its own human-rights expert called the U.N.’s response “morally unconscionable, [and] legally indefensible.”

Fair elections, which should be Haitians’ best opportunity for peaceful revolution, are a fading memory. Martelly was elected in 2011, after the Electoral Council excluded Haiti’s largest party, Fanmi Lavalas, and Secretary of State Hillary Clinton forced the Council (by threatening to cancel U.S. visas) to change the first-round results to move third-place candidate Martelly into the runoff. Martelly, after years of unconstitutional delay, presided over elections with enough violence, corruption and voter exclusion to reduce turnout to 21 percent for the 2016 presidential elections that Moïse, his protégé, won. In 2000, when Haitians voted enthusiastically — turnout was 68 percent — the results were overturned by the 2004 coup d’état organized by those who possess wealth and power in Haiti, the United States, Canada and France.

Haitians took to the streets last week because they justifiably believed that doing so was the only way they would be heard. More unrest is inevitable, unless Haiti immediately starts a peaceful revolution toward a suitable standard of living. The peaceful revolution requires Haiti’s government to take dramatic steps to penalize corruption and to respect the courts and others institutions that should hold it accountable. The peaceful revolution requires the international community to condition its support on the government’s willingness to be accountable to its people, not its willingness to squeeze them even more, and to practice what it preaches on fair elections and the rule of law.

Brian Concannon Jr., A human rights lawyer, is the executive director of the Institute for Justice & Democracy in Haiti