An impending crisis: COVID-19 in Haiti, ongoing instability, and the dangers of continued U.S. deportations 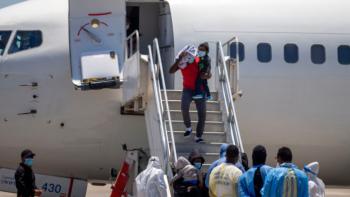 Two of the 30 Haitians deported by the U.S. to Haiti on May 26 arriving in Port-au-Prince. Haitian health officials at the bottom of the jetway received the flight which included at least eight COVID-positive deportees. Photo: Dieu Nalio Chery/AP.

First, I want to thank Congresswoman Wilson for convening this forum and for her leadership on this issue. The introduction of legislation mandating a halt to these deportations is a concrete and necessary step. I’d also like to thank all the members present here today for prioritizing this necessary discussion.

On Tue., May 26, the Trump administration deported 30 Haitians. It was the eighth deportation flight to Haiti since early February. Though the U.S. has pledged to conduct preflight testing of all deportees, Immigration and Customs Enforcement (ICE) is utilizing a 15-minute rapid test that is highly unreliable. Tuesday’s flight included at least eight people who had tested positive in recent weeks, and one individual who was experiencing symptoms the night before his deportation. Even if testing were improved, the possibility of false negatives makes it impossible to confidently deport only people who do not present a potential risk to public health. The pandemic is unprecedented; the measures to reduce its spread must be as well.

Haiti is not the only country that has received deportation flights from the United States during the global pandemic. Since Mar. 13, ICE has made at least 135 deportation flights to 13 countries in Latin America and the Caribbean. Deportees have later tested positive in Guatemala, Jamaica, Mexico, Colombia, and Haiti. In Guatemala, the government has identified more than 100 COVID-19 cases among those deported.

The Trump administration’s continued deportations represent a significant public health risk for the region and place a burden on already overtaxed public health systems. The Haitian government, for example, is forced to use scarce resources to quarantine recent deportees while being unable to properly quarantine its frontline medical workers. While this is a regional issue, there is no doubt that Haiti is one of the least prepared countries to deal with a COVID-19 outbreak. In recent weeks, confirmed cases have skyrocketed in Haiti, and, with one of the lowest testing rates in the world, this most likely represents just the tip of the iceberg. (…)

I think it is necessary to provide some background on U.S.-Haiti relations and place the focus on root causes of migration.

The Haiti we see today has been shaped by decades of failed aid policies. After the 2010 earthquake, the U.S. led the international community in an unprecedented humanitarian response. Despite the hard work of many members of Congress to provide needed assistance and to focus attention on Haiti, the billions in foreign aid have unfortunately borne little fruit on the ground. The time has come for a more thorough reassessment of U.S. assistance in Haiti.

Too often, foreign interests have been prioritized over Haitian interests, and too often, U.S. policy has directly undermined its stated goals — such as sending tons of food aid while voicing support for national production, or endorsing flawed elections while claiming to promote democratic development. For too long in Haiti, the U.S. has prioritized a flawed notion of short-term stability over genuine progress.

Today, we can criticize Haiti’s public health system, but we must also analyze why it is that some 60% of Haiti’s health services are provided by NGOs and private actors. The U.S. must do what it can to support Haiti’s frontline health workers today, but we also must rethink the policies that contributed to today’s situation, and which, without reform, will only perpetuate an unsustainable status quo.

Changing this deeply rooted relationship will require a sustained focus by members of Congress. In December, at another congressional hearing, my fellow panelist Dan Erikson proposed members form a congressional commission with a specific focus on Haiti. The need for such a body has only grown in subsequent months.

The immediate priorities of a Haiti commission could be twofold: 1) Putting an immediate halt to deportations to Haiti; 2) A complete reassessment of U.S. foreign assistance, including an analysis of legislative barriers to aid reform.

Supporting national agricultural production, improved infrastructure, and government transparency can no longer just be talking points, or we will find ourselves back at the same place when the next crisis comes.

Today, we can — and should — fight to stop the next deportation. But we also have to approach the issue more broadly and fundamentally rethink the U.S. relationship with Haiti. At a time of such acute health concerns, at the very least, U.S. policy in Haiti could begin with the spirit of the Hippocratic Oath: first, do no harm.

Jake Johnston is a Senior Research Associate at the Center for Economic and Policy Research (CEPR) in Washington, DC and is the lead author for CEPR’s “Haiti: Relief and Reconstruction Watch” blog, from which this post is drawn.