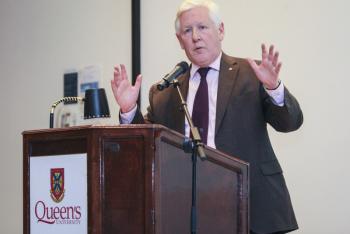 Bob Rae wants Canada to help re-establish a Haitian military with a brutal history. In making his case, Canada’s ambassador to the United Nations demonstrated his ignorance and imperial hubris.

Upon returning from a recent trip to Haiti Rae told CBC he was in favour of rebuilding that country’s army, which was disbanded in 1995. “For many years, the Haitian government said they didn’t want to have an army,” explained Rae. “But now if they want to have an army, fine, let’s talk about what Canada can do, what other countries can do to be of assistance in making those institutions work.” He added that “the reason it [Haitian military] has a bad reputation is because the Duvaliers [who ruled the country for three decades] used the army as their means of suppressing the population.”

To the best of my knowledge, Canadian officials have not previously expressed support for re-creating the Haitian military. At the infamous “Ottawa Initiative on Haiti” meeting in 2003 where high-level US, French, and Canadian officials discussed ousting then President Jean-Bertrand Aristide, they reportedly discussed reconstituting the army. But the foreign powers didn’t follow through after aligning with a band of “rebels,” largely consisting of former military personnel, to overthrow the elected government in 2004.

Following Aristide’s ouster, Canada assisted with integrating former soldiers into the police. Internal US diplomatic cables released by WikiLeaks note that upwards of a thousand former soldiers were integrated into the police force during the two-year coup government with the top echelons of the police hierarchy taken over by former army officers.

In 2012 Michel Martelly, who became president after the US and Canada intervened in an election, set up a ministry of defence and subsequently recruited 150 personnel to form an engineering corp. His successor, Jovenel Moïse, appointed a former Forces Armées d’Haïti (FADH) colonel as interim commander in chief, boosted the military budget, and sought to recruit 500 soldiers, effectively remobilizing the armed forces. But the FADH remains a fledgling institution.

Originally established during the US occupation of 1915–34, the FADH was created to crush resistance to American presence on the island. The army, notes Haitian historian Michel-Rolph Trouillot, “never fought anyone but Haitians.” For the next three quarters of a century it would be used by Washington and the elite against Haiti’s poor.

In 1957 the military overthrew leftist President Daniel Fignolé. With Washington, Canada, and Haiti’s wealthy arrayed against him, Fignolé was overthrown by the army 19 days after taking office. Soldiers broke into the presidential chambers to force Fignolé out of the country and when the slums of Port-au-Prince erupted in protest, soldiers sprayed the neighborhoods of La Saline and Bel Air with machine gun fire, killing as many as 500.

Trained by the US Army in Fort Leavenworth, Kansas, General Antonio Thrasybule Kébreau took power. Kébreau supported François Duvalier who ‘won’ an election later that year. Contrary to Rae’s simplistic depiction, the military was not Papa Doc’s principal or preferred tool of repression. Duvalier created the Tonton Macoute to terrorize the population but also to place a check on the military’s power to oust him, which is part of why Washington was sometimes hostile to Papa Doc, who served as president from 1957 to 1971.

After a popular revolt in 1986 ousted his son and successor, Jean-Claude ‘Baby Doc’ Duvalier, the military sought to bottle up the popular forces unleashed during the revolt. With US and Canadian backing, the military essentially ran the country during the four years after Duvalier’s fall.

In their bid to avoid relinquishing power to the popular forces that toppled the 29-year father-son dictatorship, the military staged an election and aborted another. Thousands were killed over the four years.

In 1990 Aristide won 67 percent of the vote to become president. Not quite eight months after he took office, he was overthrown by the military. About 4,000 were killed during three years of military rule.

As part of the deal to return Aristide in 1994, the international force was to pare down the army from 7,000 to 1,500 members. While the US promised to allow the Haitian government to vet the military structure and release human rights abusers, they withheld information on rights violators and created a panel of Haitian army officers who decided which individuals were acceptable. In response, Aristide disbanded the army.

Throughout the late 1990s and early 2000s, former military personnel repeatedly attacked government installations and officials. In August 1996 a group of former soldiers shot at the presidential palace, parliament, and police headquarters. They demanded the release of former colleagues who were detained and the resignation of René Préval, who won the 1995 presidential election handily. Former military members also represented the bulk of the force that destabilized Aristide’s second government with repeated attacks from the Dominican Republic.

Rae knows little about Haiti and should avoid carelessly pontificating about its affairs. But his liberal hubris allows him to feel comfortable doing so (in a sign of the colonial mindset in Ottawa vis-à-vis Haiti the headline on the front of The Hill Times about Rae’s recent visit read, “Handling Haiti”). In another sign of Rae’s arrogance, he replied to a Haitian journalist’s question about Canada’s role in installing Martelly, who Ottawa recently sanctioned, by snapping, “how long has that idea been in your head?” In response, a Twitter account named after Haitian revolutionary Jean-Jacques Dessalines noted, “The Canadian Ambassador to UN takes offense of Haiti journalist’s question regarding Canada’s role in the past of undermining democracy to Haiti. White supremacy is being offended when a victim points out your knee is on his back as cause of suffering while you blame the victim for being under your knee.”

Rae’s colonialist attitude is mixed with embarrassing ignorance. In arguing for re-establishing the Haitian army, Canada’s ambassador to the UN told CBC, “name me a country around the world that doesn’t have an army.” In fact, about 20 countries don’t have an active military force. They are mostly small Caribbean or South Pacific island nations, but the list also includes Costa Rica, Iceland, and Panama. Rae might learn something from the documentary A Bold Peace: Costa Rica’s Path of Demilitarization. That country successfully eliminated its military 70 years ago.

Bob Rae should either educate himself about Haiti’s history or keep his remarks in check. Unfortunately, his excessive pride about Canada as a force for good in the world will likely keep him expounding on a subject he knows far too little about.