Insecurity in Haiti laid groundwork for trafficking ring in Chile 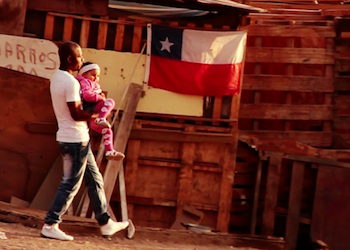 Authorities in Chile have dismantled a transnational network that used travel agencies to traffic Haitian migrants, highlighting how push factors from Haiti and the appeal of Chile’s relative stability are making migrants increasingly susceptible to illegal schemes.

Chilean authorities arrested three Haitians, one Peruvian and one Chilean on April 17 for their alleged involvement in a migrant trafficking ring that used legal travel agencies to facilitate the illegal entry of thousands of Haitians, according to information from Chile’s Attorney General’s Office obtained by news outlet 24 Horas.

Three travel agencies based in Chile’s capital Santiago, one of which had an additional location in Haiti’s capital Port-au-Prince, are accused of charging Haitian migrants up to $2,000 for “travel packages” promising to help migrants enter Chile as tourists in order to acquire jobs and longer-term visas later, according to BioBioChile.

Haitian migrants who paid into this scheme arrived in the Santiago airport carrying documents detailing their airline tickets and hotel reservations, as well as cash to prove they had sufficient funds to visit the country as tourists. But upon their arrival, the trafficking network stripped the migrants of the cash and left them without hotel accommodations, job prospects or visa help as initially promised.

Chile’s Attorney General’s Office has identified 48 Haitian migrants who fell prey to the scheme, and estimate that between 2,000 to 4,000 more may have also been tricked by the trafficking network. Authorities estimate the traffickers brought in up to $160,000 per week.

The investigation was spurred by controversy surrounding a video widely circulated on social media in February that alleged mass numbers of Haitian migrants were flying into Santiago with the intention of overstaying tourist visas. In March, Haitians who said they had fallen victim to the trafficking scheme organized a protest that drew more attention to the issue.

On the same day as the arrests, Chile announced reforms to the country’s immigration law, which will affect the entry of Haitian citizens beginning in July. The changes will restrict Haitians’ tourist visits to 30 days rather than 90, and establish new legal routes for some Haitians to acquire one-year-long “humanitarian family reunification” visas.

Human trafficking crimes have tripled in Chile over the last 5 years, from 56 cases in 2013 to 183 in 2017, according to a study by the country’s civil police cited by El Mercurio.

The dismantling of a network that trafficked Haitians into Chile with the false promise of jobs and visas is a stark example of the kinds of schemes that are likely to ensnare migrants as conditions in Haiti degrade and immigration protections elsewhere in the region are revoked.

Haitians are currently one of the fastest growing immigrant populations in Chile. More than 100,000 Haitians entered the country in 2017, twice the number that arrived in 2016, according to Chile’s immigration police force. Despite Chile’s recent attempts to crack down on unauthorized migration from Haiti, the wave of migrants fleeing the island is likely to continue growing amid mounting security concerns.

The United Nations Security Council recently voted to extend the mandate of a special mission aimed at helping Haiti professionalize its national police and strengthen its judicial system. The decision sowed disagreement over whether or not Haiti’s insecurity poses an international threat.

The United States pushed to widen the scope for UN security forces to be deployed to Haiti. But in spite of the continuing concerns over conditions in Haiti, the US Department of Homeland Security (DHS) recently pulled temporary protected status designations from nearly 60,000 Haitian immigrants, citing improved country conditions (a claim that appears to be contradicted within the agency’s own internal documents).

Further concerns over Haiti’s security situation have also recently been raised with the reinstatement of the country’s armed forces, which were disbanded in 1995 after a long history of involvement in coups, corruption and human rights violations. Several individuals appointed to high levels of command within the new force previously served during the brutal 1990s dictatorship.

These conditions will likely continue to push swelling numbers of Haitians to seek out the so-called “Chilean Dream,” generating new opportunities for criminal groups looking to cash in on migrants’ desperation.