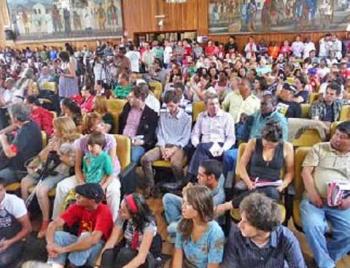 The Haitian people’s protest against the United Nation’s military occupation of their country has found an echo on the South American continent. On November 5 in the Brazilian city of Sao Paulo, over 600 people, including many international representatives, gathered to join in the Haitian demand: "MINUSTAH get out of Haiti."

'MINUSTAH' is the French-language acronym for 'The United Nations Stabilization Mission in Haiti.' It was created in May, 2004 by the Security Council of the United Nations. Brazilians as well as speakers from the United States, France, Uruguay, Argentina, Bolivia, and Haiti, representing social movements, political parties, as well as student and labor organizations, rallied for four hours at the Sao Paulo Town Hall to analyze and speak out against the intolerable situation in Haiti.

Haiti’s contribution to Latin American independence during the 19th century was often raised as one of the most important reasons compelling solidarity for the Haitian fight against MINUSTAH. "Haiti is a country which supported the freedom struggle in Latin America," said Julio Turra, president of Brazil’s largest and most important union, the Unified Workers’ Central (CUT). "A country which used to terrify slave owners in all the Americas today is being subjugated by a foreign military occupation that doesn’t have anything to do with humanitarian purposes as it pretends. It is embarrassing. Therefore, Latin American people, and Brazilians in particular, owe a debt to Haiti. It is an historic duty. We must express our solidarity.

"And we can’t accept a gradual withdraw of troops because we don’t know when that will end. [Former Brazilian President Luiz Inácio Lula da Silva had said Brazilian troops would only be deployed for six months when the occupation began in June 2004.] We must ask for the immediate withdrawal of the troops and defend Haiti’s sovereignty in the face of the occupation."

The negative effects of MINUSTAH troops on Haiti are one of the main concerns. Colia Clark, an activist in the U.S. civil rights movement in the 1960s, said that "the UN presence in Haiti is a violation of all international standards on human rights."

Hugo Dominguez from the Uruguayan Metallurgical Union, which is part of the InterUnion Plenary of Workers and the National Convention of Workers (PIT-CNT) said: "Occupations are examples of oppression politics. As Uruguayans, we feel ashamed because of the actions of Uruguayans troops in Haiti." He was referring to the videotaped sexual assault of a young Haitian man by four Uruguayan UN soldiers in the southwestern town of Port Salut over the summer (see Haiti Liberte, Vol. 5, No. 8, 9/7/2011).

Nelson Guevara Aranda from the Bolivian Miners Union of Huanuni said that a couple of weeks ago his organization, comprised of more than 5,000 workers, decided to ask the Bolivian government for the immediate withdraw of its troops because "despite seven years of an unjustified occupation, there are no positive results due to its presence; it has just constantly violated Haiti’s sovereignty and dignity."

In addition to the criticism, some speakers pointed to examples of organizations providing real solidarity to the Haitian people. "We must translate our indignation, our shame, into concrete acts," said Joaquim Piñero of Brazil’s Landless Movement (MST).

"As the Landless Movement, as Via Campesina, you know we have short legs, but in spite of these difficulties, since 2005, we have had a very important agreement with Haitian worker organizations, mainly in the agrarian sector. Those agreements, besides being examples of practical solidarity for us, are opportunities to learn from the population which has a long history of struggle and resistance. Therefore, we are pretty sure that when our militants come back from Haiti, they are changed by the experience."

There were Haitian leaders at the meeting too. Fignole St Cyr from the Autonomous Central of Haitian Workers (CATH) said he was very proud of participating in such important and broad event and he added that he has witnessed how "awareness" of the Haitian situation has grown in Brazil in recent years.

Meanwhile, one of the most well-received speakers was a Haitian who lives near Buenos Aires, Argentina. "MINUSTAH should not become a tree that hides the forest," said Henry Boisrolin of the Haitian Democratic Committee of Argentina. "To fight against MINUSTAH means to fight against other neocolonial instruments, too.

"One of those instruments is the so-called Interim Haiti Recovery Commission, co-led by former U.S. president Bill Clinton. In fact, Clinton is the real president of Haiti. As Haitian organizations, we believe that in order to fight, first we have to understand, because no one is going to die for something that one doesn’t love. Helping Haiti doesn’t mean just sending doctors and engineers. There are Haitian popular organizations that need to take the power to change the reality in Haiti and they need your help. We know that we Haitians must lead the fight, but as the occupation has being internationalized, we must internationalize the revolution in Haiti, too."

At the end of the meeting, the Pledge of Sao Paulo was read, in which the participants formally constituted the Continental Committee for the Immediate Withdrawal of UN troops from Haiti. The committee will lead an international campaign with four demands:

1. Haiti needs doctors, engineers, teachers and technicians – not occupation troops!
2. Cancel Haiti's foreign debt!
3. Reparations for the value of the compensation paid for the immoral debt imposed following Haiti's independence! Reparation for the families of victims of cholera and of human rights violations!
4. Immediate withdrawal of UN troops from Haiti!

After showing that there is a real and sincere "international community" focused on Haiti, the rally’s participants left the Town Hall singing to the new Brazilian President Dilma Roussef: "Dilma listen here, remove the [Brazilian] troops from Haiti."

The rally was a moving illustration of the growing tide of solidarity for the Haitian people throughout North and South America. Participants left energized for a year of mobilization which will culminate in a "Continental Day of Action for the Withdrawal of Troops from Haiti" on June 1, 2012, the eighth anniversary of MINUSTAH’s formal launch. Organizations and activists will work for demonstrations around the world that day to demand the immediate withdrawal of UN troops from Haiti.

The author is an anti-imperialist activist and Ecuadorian student studying in Sao Paulo, Brazil.