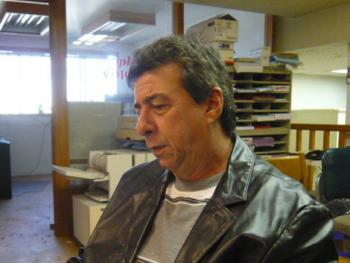 Dr. Jorge Balseiro Estevez is Director of the University Hospital of Psychiatry in the city of Camaguey, Cuba. He is a specialist in psychiatry and health administration and Auxiliary Professor of Medical Sciences at the university. He is a member of the Henry Reeve Cuban Internationalist Medical Brigade[1] and a director of the Brigade’s field hospital in the city of Leogâne, Haiti. Leogane was the epicentre of the earthquake of January 12, 2010.

Dr. Balseiro Estevez was invited to Canada on a speaking tour to some 15 cities across Canada in October and November 2011. The tour was organized by the Canadian Network on Cuba and its local affiliates, with sponsorship from a broad range of trade unions, health professionals and Haiti solidarity groups.

Roger Annis of the Canada Haiti Action Network sat down with Dr. Balseiro Estevez on October 30 in Vancouver for an interview about the Cuban medical mission’s accomplishments in Haiti and the challenges that lie ahead.

Could you describe the origin of Cuba’s medical brigade to Haiti?

Dr. Jorge Balseiro Estevez: Yes, it began in 1998. Following the devastation of Hurricane George that year, Fidel Castro announced to the Cuban people that the country would undertake a commitment to deliver important health services to the Haitian people in the form of a volunteer, internationalist medical brigade. A bilateral agreement was signed between the governments of Cuba and Haiti.

The Ministry of Public Health and Population of the Haitian government decided where the brigade’s services were most needed. As much as possible, it would make use of existing medical services and infrastructure. The first Cuban doctor arrived in Port au Prince in December of that first year. In 1999, 63 family medicine and specialist doctors arrived.

And since that first year?

JBE: The numbers of doctors increased. In 2001, a Faculty of Health Sciences opened at the University of the Aristide Foundtion (UniFA) in Tabarre, in Port au Prince.* Unfortunately, the school was closed down by the coup d’etat of 2004. We were obliged to move the students to Cuba if they wished to continue to study. Three hundred and twenty one of them moved to the campus of the Latin America School of Medicine in Santiago de Cuba. Seventy students per year continued to enrol in the School.

Notwithstanding the coup, Cuba brought “Operation Miracle” to Haiti in 2005. This is the joint eye care program with the Government of Venezuela that has improved or restored eyesight to nearly 2 million people in Latin America, notably through cataract surgery. We opened three ophthalmology clinics in Haiti that year–in Port au Prince, Acquin (southwest) and Trou du Nord (northeast).

In December, 2006, we signed an agreement with the Government of Haiti, and in cooperation with Venezuela, to establish ten comprehensive diagnostic centers. The first one to be completed was in Cite Soleil in February 2007. These centers were also to be used for training of Haitian medical students.

Other medical personnel then followed, including 361 graduates of the Latin American School of Medicine from other countries in Latin America and fifth year, Haitian medical students and Haitian resident doctors in Cuba.

There were five comprehensive diagnostic centers in operation in the earthquake zone, plus our brigade personnel went to work in Haitian institutions. We quickly established six field hospitals.

The first of those additional, 1,500 medical personnel were those who had already worked in Haiti. All of our doctors were paired up with the Haitian students, as much as possible.

How many Haitians have been served by Cuba’s medical mission?

JBE: According to my most recent statistics from several weeks ago, since 1998, the Henry Reeve Cuban Internationalist Medical Brigade has treated more  than 18 million cases in Haiti. We have performed 304,577 surgeries and vaccinated 1,501,076 people. We estimate the number of lives we have saved is 284,239.

The post-earthquake work is very complex, with large numbers of injured people to treat. Rehabilitation services have been provided to 75,013 people. So far, 75 people have received prostheses to replace lost limbs. Psychosocial treatment is also needed for survivors. 116,000 children, for example, are receiving some form of psychosocial assistance.

Rodent and mosquito control in communities and in the survivor camps is an important part of our work, too.

The cholera outbreak must have been quite a burden to pile onto the existing post-earthquake work?

JBE: Yes, but we had no choice but to respond quickly. The Brigade established 44 cholera treatment units (complete with testing laboratories) and 23 cholera treatment centers. Those numbers are today at 45 and two, respectively. We also have 46 cholera detection units in operation in communities.

Our total number of patients in the first year of the epidemic was 76,130. Thirty percent of those were under the age of 15. We suffered 272 deaths in the areas we were serving, but we are very proud to report that we have had no deaths in the past 267 days. Our mortality rate from cholera has declined to 0.36% per patient, compared to the country-wide rate of 1.41%.

So give us a summary of Cuba’s medical presence in Haiti today.

JBE: At present we have 786 Cuban doctors and health workers in Haiti, and we are working with an additional 21 from Latin American countries. Since the earthquake, we have received $23 million U.S. in financial assistance from international donors.

We have 23 communal (provincial) hospitals in operation and ten comprehensive diagnostic centers (operated in cooperation with Venezuela). We have a total of 30 rehabilitation rooms. There are 28 active epidemiological surveillance and control programs (surveying for such threats as malaria and dengue). There are 12 health (family doctor) centers and we are planning to build a laboratory for producing prostheses and three electrotechnical workshops (for equipment maintenance and repair). Two Operation Miracle clinics are still in operation and we are providing technical advice as well as vaccines for vaccination programs.[2]

Could you say a few words about your personal experiences?

JBE: I work at the field hospital in Leogane (west of Port au Prince, the epicenter of the earthquake). Our work is very complex. I would like to give you an idea of the scope and complexity of the treatment we provide to our patients.

We have to deliver medical services. We have treated some 48,00 patients and performed 500 surgeries and 150 deliveries.

We have fitted 70 amputees with prostheses. The patients require constant care and follow, including because as a child or adolescent grows, or as a wound heals from an amputation heals, the prosthesis is outgrown and must be replaced. So we must equip ourselves with the capacity to make new ones.

Children and new mothers require special care. We have a lot of activities to occupy the children and help to heal their psychological wounds.

Our work is performed in tents, so we must take special care to keep everything hygienic. (There is a very good hospital building in Leogane that is underutilized but we have been unable to come to an agreement to help open up the unused sections of the facility.)

Food and clean water must be supplied, not only for our hospital but also for the surrounding community, as needed. Everything we do we must insert training of student doctors or health workers. And we must conduct health promotion and education among the population we are serving.

So you see, these are very challenging conditions in which we are working.

At the international donors conference for Haiti on March 31, 2010, Cuba outlined a plan[3]whereby the world could assist Haiti in creating a comprehensive, national health care system. I believe Cuba mentioned a figure of $170 million per year for the next five years to establish such a system. Is this proposal moving forward, and what are the main obstacles to its success?

JBE: I think this could be moved forward with the collaboration of all countries. The main obstacle is the unfulfilled financial and other promises by some. The world must be more active in fulfilling on time its agreements and commitments to Haiti.[4]

Are you hopeful for Haiti’s future?

JBE: I am very hopeful for Haiti’s future. As Fidel has said,  “a better world is possible.” The countries of the world must come together and assist Haiti to have a better future.

* This sentence in the interview corrects information that was originally published. The Faculty of Health Sciences at the University of the Aristide Foundation (UniFA) was reopened on September 27, 2011.

Notes:
[1] The Henry Reeve Cuban Internationalist Medical Brigade was created by Cuba in 2005 for the purpose of disaster medical relief anywhere in the world. It’s namesake, Henry Reeve, was born in the United States in 1850. In 1869, Reeve arrived in Cuba as part of a volunteer, expeditionary force from the U.S. to assist Cuba in its fight for independence from Spain. He served with distinction in the Cuban Army for 7 years and died in battle in 1876.

[2] During a visit to Cuba by Haitian President Michel Martelly on Nov 15-17, 2011, the two countries agreed to expand services at seven of the hospitals and five of the diagnostic centers mentioned in this paragraph.