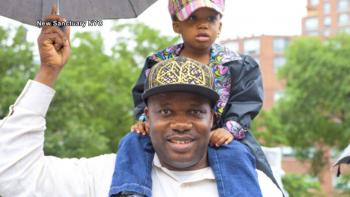 Jean Montrevil in New York before his deportation, with his daughter on his shoulders. The Haitian diaspora has “to put pressure on Biden to stop the deportations to Haiti.”

Jean Montrevil, 52, was a prominent immigrant rights advocate with the New York-based New Sanctuary Coalition until ICE (Immigration and Customs Enforcement) detained him back in January 2018.

At age 17, he had legally emigrated from Haiti to New York in 1986 and received U.S. permanent residency. But he went to jail on some drug and gun possession convictions, and in 1994, a judge ordered him to be deported due to changes in the 1990 Immigration Act.

When he was released from prison on probation in 2000, he had turned over a new leaf, scrupulously observing his probation terms and immigration appointments. He married, got a job, and started a family while he legally fought the 1994 deportation order.

Since 2006, he had also become an outspoken voice for immigration rights and reforms, which put him and another immigrant rights advocate, Rhavi Ragbir, squarely in the crosshairs of the virulently anti-immigrant administration of President Donald Trump.

ICE arrested Jean outside of his Brooklyn home during his lunch break (even though he had an imminent immigration check-in scheduled) and sent him to the Krome Detention Center in Miami. He was expeditiously deported to Haiti within two weeks, a process that normally takes several months. Jean left behind his wife, Jani Cauthen, and three American-born children, who have launched a campaign to bring him back to the United States. He is suing the U.S. government on the grounds that his deportation was a violation of his First Amendment rights.

Due to the present uprising in Haiti and revelations that the Biden administration has deported more Haitians from February to March than Trump did in all of 2020, we reached out to Jean to get his perspective on the ongoing struggles of deportees. It should be noted that Jean is neither a radical nor a self-identified Marxist. Prior to his deportation, Jean strongly believed that the best route to getting justice and advocating for the dispossessed was through legislation and policy changes, not revolution.

This interview was conducted in the first week of May 2021.

Given the situation in Haiti, what is life like for deportees right now?

If you don’t have good support from back home [in the U.S.], you’re in trouble. A lot of guys are suffering really bad. What do they have to do in order to survive out there? Begging.

It’s always been that way, right?

Yes, especially for the new deportees. If you don’t have good family support you’re in trouble. There’s no work, there’s no place to go, there’s no hustle [they can take part in]. None of that. You really depend on people back in the States. But now because of Coronavirus, people can’t send money like they used to. They really face big challenges.

Do they have to deal with violence? If so, who targets them?

I don’t know too much about that. But most people don’t want anything to do with you [the deportees].

Do deportees have any role in the current uprisings in Haiti?

Everybody is getting involved, even Catholic Bishops. Me personally, I don’t get involved because of the violence. Some guys might, but I don’t. The other day, there was a demonstration, and it was peaceful. It was led by students. They marched up to Pétionville.

What do you think about the government’s role?

Haiti has no government. When I first got here three years ago, I wanted [President Jovenel Moïse] to finish his term. But now that I’ve been here, I think it might be better if he goes. Police officers are dying in the streets, gangs are taking over.

They’ve been deporting a lot of women and children as well. Do you see how this shows up in Haiti?

No, they have ways of keeping it secret. They drop them off in the back of the airport, put them on a bus, get processed… The U.S. is working with the Haitian government, everything is secretive. I’m surprised to hear that they deported so many Haitians since Joe Biden became president. They know the situation in Haiti. I can’t believe that!

It’s not a big issue in Haiti. When we found out about COVID last year, we were scared. We took all the precautions.

Do you see any change in a deportee’s situation after being there for a long period of time, or are they generally in the same situation?

I talked to a deportee friend of mine a couple of days ago. We’re leaving Haiti to go to the Dominican Republic now. If you have a group of 10, maybe nine of them want to leave, maybe all 10. The Dominican Republic is starting to crack down on the situation. They used to sell you a visa. Now you have to apply online, and they screen you and select who they want to come over.

Are deportees using their language skills to work in the tourism industry in DR?

I went to the DR last year. I spent three weeks there, I didn’t see a lot of opportunities. If you don’t have good friends and people to receive you, your money will run out. What do you do after that? After three weeks, I wanted to leave. Some people are doing telemarketing and working for banks. But I just didn’t see it.

Do you have to get in line for those opportunities?

Exactly. Don’t forget, the DR has a lot of deportees who speak English. Many women get over there and get into sex work. The guys who don’t speak English get into construction or taxi driving. Some people work in hotels. Maybe before all this stuff happened, it might’ve been good to go to DR, but now it’s too late.

They’re also deporting Dominicans of Haitian descent who were born there.

If they catch you without a visa over there, they deport you, or they mistreat you. That’s the reason I’m not going to the DR. I think the only people they respect over there are tourists. If you’re a tourist, they respect you. But if you’re trying to get a job? Forget it.

So basically, there’s no justification for deporting people to Haiti. Correct?

The United States knows exactly what’s going on in Haiti. Even on their website, they have “no travel to Haiti.” They’re advising their own people not to travel to Haiti for any reason. People are dying every day, people are suffering, people can’t eat… It’s a hellish condition. Why the United States chose to deport people back in this situation, I have no idea.

What were your expectations with the Biden Administration?

I’m surprised because I liked Joe Biden. I heard he was going to suspend deportations for 100 days when he took over, and he didn’t do that. But this is what I’ve been saying for years: we immigrants have to keep fighting in America. We cannot take these politicians at their word anymore.

Did you think Joe Biden promised to end deportations based on the pressure people had been applying throughout the Trump years, or did you think he was going to do it based on principle?

That’s what he said he was gonna do.

“I THOUGHT BIDEN WAS GOING TO REVERSE A WHOLE LOT OF POLICIES.”

Did you take him at his word?

Yup. I’m so disappointed in him. I thought Biden was going to reverse a whole lot of policies. But I haven’t seen that from him. What’s going on is a crime. Its painful. That’s politicians for you.

Is there anything you think the Haitian diaspora could be doing to support deportees?

Yes, they have to put pressure on Biden to stop the deportations to Haiti. It’s clear and simple: stop deporting Haitians. You know Haiti isn’t a functioning country. You have kidnappings going on. My friend a couple days ago, thieves jumped his wall and took everything from his car. You can’t go anywhere. You basically have to stay home. Joe Biden knows that already. He knows that. Organizations need to let their voice be heard, they have to do something now. Go to the White House and protest. As immigrants, we don’t have a voice. Organizations used to speak for us.

When I was there, we had a lot of organizations fighting against this. Now it’s less. We started to trust the word of the politicians. When Trump was in power, he did a lot of damage. Now that we have Democrats coming in, they’re still doing the same thing!

Now that Democrats are in power, do you believe some people stopped fighting?

From your vantage point, do you see any organizations that are doing anything to support deportees?

What would you say to people here in the U.S. who have family who were deported?

The families of deportees might support you for a couple of months, maybe six months to a year. But then they stop. Basically, they give up on you.

What do you have to say to Haitians in the diaspora who have negative views on deportees?

What I want them to know is that you can’t judge people. We are human beings also, we have rights as human beings. Like myself, I really wanted to do good things for the people. I came three years ago, and I started a restaurant and put people to work. I had to shut down the restaurant, because of the unrest. Police would teargas the place, and it would affect customers. People were getting killed out front. I witnessed people getting killed in front of me.

Imagine gang members who can’t even buy food or clothes, and they have these big machine guns. Where do they get these guns from? A lot of these guys are ex-police officers. Sometimes they’ll take your car and force you to walk. If you don’t walk, they’ll kill you.

Is there anything else you want to say?

Just for people not to forget us, deportees. We need your support. We need your support, brother, we need it. I don’t get too involved with friends. I have a deportee friend though. He took risks and ended up doing nine months in jail. The jail was so bad, he just picked up and went to the DR.