'It's not just low-hanging fruit': Canada's Haiti sanctions are hitting some big names 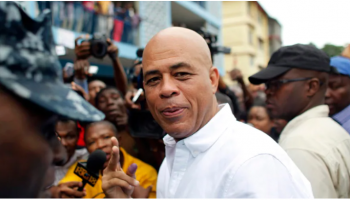 Haiti's former president Michel Martelly looks at the camera after voting in the Petion-Ville suburb of Port-au-Prince, Haiti, Sunday, Nov. 20, 2016. Martelly is one of the prominent Haitians to be hit with Canadian sanctions. (Ricardo Arduengo/Associated Press)

The sanctions Canada announced this weekend against six high-ranking Haitian politicians may or may not succeed in changing their behaviour — but they did show that the government of Canada is not as committed to Haiti's ruling party as the Haitian opposition has claimed.

All six of the sanctioned figures were connected to the Parti Haitien Tet Kale (PHTK) or "Haitian Bald-Head Party." They include former president Michel Martelly, whose hairless head gave the party its name.

As if to make the rebuke clearer, PM Justin Trudeau told reporters at the Francophonie Summit in Tunisia on Sunday that Canada's actions in Haiti are not coordinated with Haiti's de facto government.

"Our approach now is not about doing what one political party or the government wants," he said. "We cannot simply support one side or the other on the political spectrum in Haiti, but this time we've implemented serious sanctions on the elite, on these oligarchs, specific individuals who for too long have been directly profiting from violence and instability in Haiti that is harming the Haitian people."

It all points to a shift in the federal government's view of the party that has effectively ruled Haiti for a decade.

Secondly, they were neighbours.

"The official residence of the Canadian ambassador in Haiti is next door to Mr. Martelly's residence," Rivard told CBC News.

The president and neighbour Rivard remembers was a "very easy-going man" who had developed his people skills as a successful performer of Haitian Compas music.

"Michel Martelly is what we call a seducer," he said. "He's a man that is on the stage, so he knows how to interact with people and I remember having a very good relation with him."

Still, there were indications the former musician known as "Sweet Mickey" could be less sweet in private.

"He could be very charming publicly," said Girard. "But when he had to deal with issues with his party and ministers, he was probably a different person. And yet he was close to Canada.

"Canada had a good relation with Martelly."

The Canadian sanctions were widely reported and commented on in Haiti, where the PHTK-dominated Ariel Henry government is unpopular.

Rivard said the high-profile names on Canada's sanction list — people like former president Martelly and former prime ministers Laurent Lamothe and Jean Henry Ceant — sent the message that no one is too senior to be singled out.

"It's not just low-hanging fruit. You're trying to get, you know, fruits very high in the tree," he told CBC News. "We named three heavyweights in Haitian politics, so it will have an impact.

"It will send a very strong message to people that they could be added to that list, and by openly supporting gangs they expose themselves, and I think they will be much more cautious."

"A lot of Haitians have properties in United States, in Canada and in France," he said. "You would be surprised to know how many Haitians have a Canadian passport in their drawer in case they need it."

A mansion in Quebec

Martelly's foreign holdings are concentrated not in Canada but in Palm Beach, Florida, and he has not been sanctioned by the U.S. government so far.

But one of those sanctioned, Senator Rony Celestin, is a textbook case of how Canadian sanctions can hurt Haitian elites.

He will no longer be able to enjoy his $4.25 million home in an exclusive area of Laval, Quebec, which he owns with his wife Marie Louisa Celestin, who also serves as a consular official of Haiti in Montreal.

Celestin is one of the last politicians left in Haiti who enjoys a democratic mandate, although his six-year term is set to expire in little over a month and he already has announced his retirement from public life.

Celestin claims to have made his fortune in the import-export business and through a company called PetroGaz Haiti S.A., which claims on its website to be "among the leaders in the petroleum industry ... offering premium services worldwide."

In addition to its oil and gas holdings, PetroGaz Haiti claims large operations in shipping and in agriculture. But there is little real-world evidence of PGH's extensive holdings.

Celestin's feud in June with another Haitian PHTK senator, Willot Joseph, saw the two exchange accusations of corruption and criminality on social media and on Haiti's airwaves.

Willot Joseph is no angel himself. In 2019 he admitted to accepting a $100,000 US bribe to vote to confirm a prime minister-designate.

"I don't see anything wrong with receiving money during difficult times," he told Gazette Haiti. "I take it and I don't have to be [a] hypocrite with anyone."

But Joseph's allegations against Celestin were significantly worse. In addition to claiming Celestin was a drug trafficker, he accused him of orchestrating two murders — including that of journalist Néhémie Joseph, whose bullet-riddled body was found in the trunk of a car in Celestin's fiefdom of Mirebalais in 2019.

Celestin accused Joseph of running a car theft ring and consorting with gangs.

The two feuding senators called a truce only after each had thoroughly discredited the other.

Frantz Andre, a Haitian-Canadian activist in Montreal, did more than anyone to shine a light on Celestin's hard-to-explain wealth and his life of luxury in Canada.

He organized protests by members of Montreal's large Haitian diaspora at the Laval mansion.

He said the house at 391 Rue les Erables in Laval-sur-le-Lac may be only part of Celestin's Canadian holdings.

"About a week ago, a real estate agent called me and told me that they also have other real estate in Saint-Eustache," he said.

He said he's glad to see Canada taking action against political leaders like Celestin and Martelly, although it should have happened earlier.

He said he sees the sanctions as a positive "first step".

"But we think there's still a way to go, going after the real criminals, and the real criminals are those fifteen oligarch families who've basically been running the country economically, politically, and who are funding gangs as well," he said.

"I do not call them gangs. I actually call them mercenaries," he said. "They are people working for others. It's a war between different interests. And these are mercenaries, not gangs."

While the latest round of sanctions may have caught some big fish, said Andre, "the whales still have to be taken."

"Why are we not talking about (Gilbert) Bigio?" he asked. Haiti's richest man owns and operates a private port that has been used to smuggle contraband, and he has been implicated by gang leaders. "Why not the Acra, why not the Vorbe?"

The men Andre claims pull the strings of both politicians and gangsters are the dozen or so elite families of Haiti's oligarchy that once supported the Duvaliers and now have made new connections with the PHTK.

Andre said he hopes the sanctions announced this week will lead to swift action against properties like the house at Laval-sur-le-Lac.

"We simply say this is corruption, there's illegality and we have to make sure that really is being seized and somehow, hopefully, returned to the country, to the population."