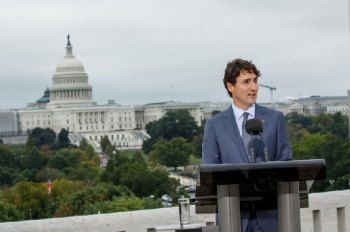 Canadians are increasingly acknowledging anti-Black racism at home, from law enforcement and our health system to campuses and the corporate world. Yet its role in foreign policy is rarely discussed. The impact of our policies are felt in large Black populations globally, such as Port-Au-Prince, Haiti, for instance, a city closer in distance to Montreal than Vancouver.

In July, a six-month pregnant garment worker, Sandra René, suffered a tragic death in Haiti. While few Canadians may initially think to connect René’s fate to anti-Blackness at home, there’s a link to be made.

René worked at Palm Apparel and Sewing International in Port-au-Prince for more than 10 years. When she fell ill, she sought medical help. Upon arriving, she was told she wasn’t covered and turned away. René’s employer had been deducting 3 per cent of her meager salary in health benefits but neglected to actually hand over the deductions to the medical agency. The treatment would cost 70,000 Gourdes ($840), which she didn’t have. René’s employer refused to pay this or loan her the money, and she was forced to return to her home. She died four days later.

Palm Apparel is a subcontractor of Canadian t-shirt giant Gildan, and has worked with them for more than 18 years. Like most of Haiti’s sweatshops, Palm Apparel is run by a light-skinned man presiding over an almost entirely Black workforce. Alain Villard, the company’s president, has a record of opposing efforts to improve working conditions and raise the minimum wage. In 2017, for example, five union leaders were dismissed in the aftermath of a sector wide strike calling for an increase to the US $4.50 daily minimum.

Despite this dubious record, the Canadian government continues to promote Haiti’s apparel sector as a means of “development.” In 2007, for instance, then president of the Canadian International Development Agency, Robert Greenhill reportedly praised the Haitian garment industry, citing the positive effects that would flow from the reactivation of the country’s export processing zones.

The argument put forward was that Haiti should focus on its “comparative advantage” in the garment market, implying offering the cheapest labour in the hemisphere in addition to having favourable proximity and privileged access to the United States market. In practice, this means Black women stitching T-shirts for $5 a day at companies run by white men.

The men running Haiti’s apparel sector are some of Canada’s main political allies in the country. Another long-standing Gildan subcontractor, for example, is owned by André Apaid, who led the Group of 184 — a collection of Haitian elite —  opposition to elected president Jean-Bertrand Aristide in 2004. Canada — as well as the U.S. and France — financed and worked with the Group of 184 to overthrow Aristide, partly because he raised the daily minimum wage from 36 to 70 Gourdes (about $1.25 to $2.50).

Since Aristide’s ouster, Haiti has effectively been run by an entity called the Core Group, composed of ambassadors from the U.S., Canada, Spain, Brazil and France, as well as representatives of the European Union and the Organization of American States. Core Group officials are mostly white.

Some have traced the founding of the Core Group to the “Ottawa Initiative on Haiti,” held on two days in early 2003 to discuss the country’s future. But there were no Haitians invited to the private get-together where members discussed placing the country under United Nations’ trusteeship, recreating the Haitian Army and overthrowing Aristide.

The minister responsible for organizing that meeting, Denis Paradis, justified Canada’s intervention in Haiti as being partly due to fear of (Black) population growth, which he described as “a time bomb which must be stopped immediately!”

Many Haitians point out that the effort to oust Aristide grew as the country prepared to celebrate the bicentennial of its independence, which came after a revolution that dealt a crushing blow to slavery, colonialism and white supremacy globally. As the first nation of free people in the Americas, created through the world’s only successful large-scale slave revolt, Haiti established a slave-free state three decades before human bondage was abolished in today’s Canada.

Torontonians recently celebrated Simcoe Day, which commemorates John Graves Simcoe, who is lauded for adopting legislation that began the process of ending racial slavery in Canada. However, later on in life, Simcoe led the British invasion of Saint Domingue (now Haiti) to crush the slave revolt. In fact, as governor of parts of Saint Domingue in 1796, he re-instated slavery.

As part of our reckoning with anti-Blackness in Canada, we must see ourselves as part of a much larger world. Anti-Blackness extends well beyond our borders and it’s critical that we question what is happening in our name in the world’s poorest places. If Canadians are serious about tackling these issues, we should stop promoting a development model that requires poverty to be maintained abroad in order for business to thrive at home.