It’s time for Canada to end arms sales to Israel 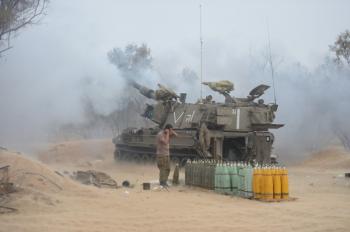 Since 2015, Canada has exported $57 million worth of weapons to Israel, including $16 million in bomb components. Photo courtesy the Israel Defense Forces/Flickr.

By Labour Against the Arms Trade, Canadian Dimension, May 18, 2021

The following is an open letter to the Canadian labour movement from Labour Against the Arms Trade, a grassroots coalition of peace and labour activists working to end Canada’s participation in the international arms trade. Reprinted with permission.

I am writing to you on behalf of Labour Against the Arms Trade, a grassroots coalition of labour and peace activists working to end Canada’s participation in the international arms trade. We organize for arms conversion and a just transition for arms industry workers.

Since 2015, Canada has exported $57 million worth of weapons to Israel, including $16 million in bomb components. The ongoing bombing of Gaza, including of civilian sites, should compel Canada to reassess all Israel-bound arms exports and imports, such as the recently signed contract with Israel’s largest weapons company, Elbit Systems, which supplies 85% of drones used by the Israeli military to monitor and attack Palestinians in the West Bank and Gaza. Yet Canadian governments have repeatedly put arms deals with Israel ahead of the rights and lives of Palestinians. As our friends at the UK-based Campaign Against Arms Trade point out, arms sales to Israel “do not just provide military support, they also send a clear sign of political support for the daily abuse that is central to the occupation.”

Canada’s unions have forcefully condemned the attack by Israeli forces at the Al-Aqsa Mosque and Israel’s imminent confiscation of Palestinian homes in Sheikh Jarrah. As the Canadian Labour Congress has stated, “Ongoing evictions and Israel’s illegal occupation is in blatant violation of international law and amounts to the ethnic cleansing of Palestinians.”

It is time for Canada’s unions to call on the Government of Canada to suspend bilateral trade of all arms and related materials with the State of Israel until it complies with international law and Palestinian rights are upheld. Our movement’s commitment to peace, human rights and international solidarity demands it.

Labour Against the Arms Trade