Jean-Bertrand Aristide is in stable condition in Cuba 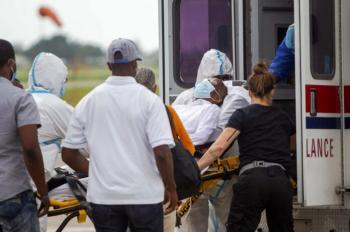 Former Haitian president Jean-Bertrand Aristide being taken from an ambulance at the Port-au-Prince airport on Jun. 24 to be loaded onto a private jet bound for Cuba to receive medical care.

On Jun. 24, former Haitian president Jean-Bertrand Aristide, 67, was taken by ambulance and then a private jet to a hospital in Havana, Cuba, where he was placed in an Intensive Care Unit (ICU).

But on Sun., Jun. 27, he was released from his ICU and is in stable condition, his wife, Mildred Trouillot Aristide, communicated to a close family friend.

While numerous press reports have asserted that Aristide had contracted Covid-19, which is spiking in Haiti, spokespeople for the Lavalas Family, the party that Aristide founded and heads, have not confirmed the reports.

On the contrary, on Mon., Jun. 28, the Haitian daily Le Nouvelliste, which broke the story that Aristide had Covid-19 and received an emergency visa from the Haitian government for “humanitarian reasons,” spoke to the former head of state by telephone from his hospital bed in Havana.

“I tested negative for Covid-19 since last Friday, and progress is increasing on a daily basis,” Aristide told Le Nouvelliste. “I hope that, soon, I will be at UNIFA where the university hospital will welcome all patients with respect and dignity,” referring to the University of the Aristide Foundation (UNIFA), which has trained and graduated hundreds of Haitian doctors since its founding two decades ago.