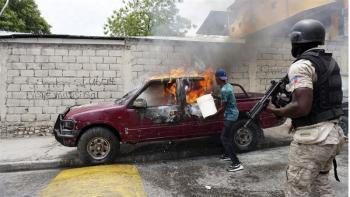 Media organisations in Haiti demanded police protection on Tuesday after the killing of a radio journalist who reported on corruption allegations against President Jovenel Moise's administration.

An unidentified gunman shot journalist Rospide Petion, 45, as he drove home late on Monday in a car owned by Radio Sans Fin.

"The press is for everyone. To inform everyone. In all kinds of situations," the Haitian media organisations said in a statement, adding that everyone is free to follow the media they choose.

"These days are not good for journalists and media," Frantz Duval, editor of Le Nouvelliste newspaper, said on Twitter on Tuesday.

Monday's shooting came amid days of sometimes violent street protests calling for the resignation of Moise, during which several journalists have been attacked.

Some protesters accuse certain media outlets of being pro-government.

On Sunday, a photographer with Le Nouvelliste was injured by a rubber bullet, and protesters tried to attack a videographer with Radio Television Nationale D'Haiti.

On Monday, reporters with Radio Tele Ginen were attacked with rocks as protesters vandalised their cars.

Moise issued a statement on Tuesday saying Petion's killing was a "heinous act" that weighed heavily on Haiti's press.

The judges of the High Court of Auditors said in a report last week that Moise was at the centre of an "embezzlement scheme" that had siphoned off Venezuelan aid money intended for road repairs.

The judges' report laid out a litany of examples of corruption and mismanagement.

The magistrates discovered, for example, that in 2014 Haitian authorities signed contracts with two different companies - Agritrans and Betexs - for the same road-repair project. The two turned out to have the same tax registration number and the same personnel.

Moise, before he came to power in 2017, headed Agritrans, which received more than 33 million gourdes ($700,000 at the time) to do the road work, though the company in principle did nothing but grow bananas.