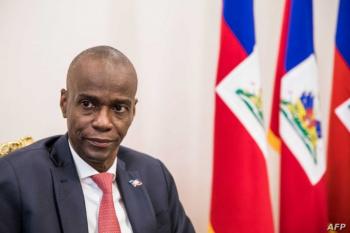 Jovenel Moïse’s self-coronation marks the culmination of a political counter-offensive which began in December 2020, when Haitians observed a truce after a year of fierce political struggle.

On Mon., Jan. 13, 2020, Haitian President Jovenel Moïse began ruling by decree because, according to his calculations, the mandates of two-thirds of Haiti’s 30 senators expired on that day, while the terms of all 119 members of the Chamber of Deputies elapsed.

However, some of Haiti’s senators challenge their dismissal by the president as illegal. “No article of the Constitution in force grants him the right or the power to rule on the duration or the end of the mandate of the sovereign people’s elected representatives,” wrote six senators in a Jan. 13 open letter. They branded Moïse’s Tweet announcing Parliament’s expiration a “unilateral decision” and declared that “even with a reduced staff, the Parliament exists and cannot be struck down to open the way to autocratic governance by decree.”

SOME OF HAITI’S SENATORS CHALLENGE THEIR DISMISSAL BY THE PRESIDENT AS ILLEGAL.

They went on to charge that one-man rule was Moïse’s goal all along, “which explains [his] slowness and procrastination in the organization of the elections by the constitutional deadline of October 2019 for the renewal of the Senate and of the Chamber of Deputies.”

Moïse and his defenders argue that the Parliament was to blame for not passing the budget and electoral law necessary to hold the elections. However, this argument appears specious. The Parliament’s vast majority were members of Moïse’s Haitian Bald-Headed Party (PHTK) or its close allies, and on several occasions, like the ouster of Prime Minister Jean Henry Céant in March 2019, Moïse was able to compel the legislators to do his bidding, even if it required universal sizable bribes.

Erstwhile Moïse ally but now a leader in an opposition coalition, Sen. Youri Latortue (who signed with the six) also wrote a letter of his own saying that the mandate of senators is fixed by “Article 94.2 of the Constitution [which] refers to the electoral law. This law, in its Article 50.3, fixed the mandate of the first Senators at six years. I challenge Jovenel Moïse, who says he wants to apply the Constitution, to prove the contrary.” Latortue, who began his term on Jan. 11, 2016, calculates that his mandate ends in January 2022.

Another senator elected in 2015 – Jean Renel “Zokiki” Sénatus – has the same status.

Furthermore, Haitian Senators have staggered terms, with those first elected having six  years, second elected four years, and third elected two years. “But due to election delays, reruns, and other complications, there is controversy about which category senators elected in 2017, for example, fall into,” explained Henriot Dorcent, a Radio Panou political commentator. “Are they two-year or six-year senators?” (Most are Moïse allies, like Sen. Gracia Delva, and agreed to step down.)

Moïse’s self-coronation marks the culmination of a political counter-offensive which began in December 2020, a month when Haitians traditionally observe a truce from raging political struggle. Haiti had been locked down – “peyi lòk” – in the previous three months by road barricades, general strikes, and massive demonstrations demanding that Jovenel step down. Businesses, factories, state offices, and schools were shuttered for weeks on end, leading even the New York Times to entitle a long article “‘There Is No Hope’: Crisis Pushes Haiti to Brink of Collapse.”

December began with a conference of Moïse allies, resulting in the compromise-proning (Hotel) Kinam Accord or “accord of dupes,” according to Haitian analyst Catherine Charlemagne. At the same time, a long parade of U.S. officials (Kelly Kraft, David Hale, Cynthia Kierscht, etc.) passed through Port-au-Prince to call for “dialogue” and “national unity.” Organization of American States (OAS) Secretary General Luis Almagro topped it all off with a visit to bolster Moïse on Jan. 6, 2020.

While demonstrations and barricades have yet to resume in the new year, Moïse felt it necessary to try to recoup some political capital with a demagogic flourish: he announced that he would use the money that would have paid parliamentarian salaries to build ten new high-schools around Haiti.

MOÏSE’S SELF-CORONATION MARKS THE CULMINATION OF A POLITICAL COUNTER-OFFENSIVE WHICH BEGAN IN DECEMBER 2020.

He is also making a public relations tour around the country, visiting towns in Haiti’s north this week.

But he really upped the ante when he announced that he would convene a constitutional assembly to rewrite the 1987 Haitian Constitution so as to provide the presidency with more power and agency.

“We will work with all political actors and our international partners to draft constitutional reforms to ensure a widely acceptable, workable, democratic balance of power which will then be put to the Haitian people in a referendum,” Moïse said in a Jan. 17 statement.

“His proposal completely violates the Constitution,” explained lawyer Mario Joseph of the Port-au-Prince-based Office of International Lawyers (BAI). “The Constitution’s Article 284-3 clearly states that amending the Constitution by referendum is strictly forbidden. He apparently considers the Haitian people to be monkeys who will allow him to do whatever he wants. It’s a case of counting well, but calculating badly. He has trampled their human rights, their democracy, and their dignity. He can’t even organize scheduled elections with a parliament he controls, and now that it’s disbanded he wants to rewrite the Constitution?”

The project seems even more far-fetched when one considers the statement this week of the United Nations World Food Program (WFP) that some 3.75 million of Haiti’s 11 million people are severely food insecure. Already the WFP provides 300,000 lunches daily to Haitian school children.

Furthermore, the 2020 Carnaval season began on Sun., Jan. 19, with official Mardi Gras celebrations planned in Port-au-Prince and Cap Haïtien for Feb. 23-25. But already, as in the past three years, a Twitter campaign with the hashtag #AbaKanaval (Down with Carnaval) has begun. “We don’t want a Carnaval in Carrefour !!!” tweeted Charles Berlin Cénatus (@BerlinAyiti) in 2019 with a message similar to many of those today. “Give us roads and electricity instead. #AbaKanaval. Stop burning through #Kob PetrocaribeA (the PetroCaribe money.) #AbaLaviChè (Down with the high cost of living). #AbaEnpinite (Down with Impunity).”

The massive demonstrations, strikes, and “lock downs” to demand Jovenel’s resignation seen throughout most of 2019 are likely to rekindle soon.

The Twitter campaigns were inspired by and often link to a 2017 music video also titled “Aba Kanaval” by the artist BIC Tizon Difè which features many of the same demands being made by protesters over the past year and a half.

“The only thing that Jovenel Moïse is the president of is a criminal organization, a group of legal bandits,” concluded Mario Joseph. “He only answers to Washington and a few members of Haiti’s bourgeoisie. The only way he could change the Constitution is if the OAS were to do it for him. He is a completely domesticated house slave. The Haitian people have to continue their struggle to uproot him.”

In a Jan. 9 article in The Nation, author Amy Wilentz predicted in the title of her piece that “Haiti is in the eye of the storm.” Most Haiti analysts – Haitian and otherwise – feel the same way. Despite Jovenel Moïse’s promises to build schools, rewrite the Constitution, and hold Carnaval, the massive demonstrations, strikes, and “lock downs” to demand his resignation are likely to rekindle soon.