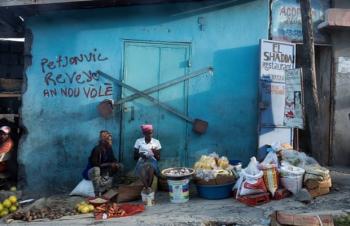 At the barricaded junction next to the international airport in the Haitian capital Port-au-Prince, protesters burn tyres and block the road with stones and a large truck.

Cars and commercial vehicles that approach turn back or risk being stoned, while pedestrians wade on through the smoke.

Standing among a group of young men overseeing proceedings is Wandy Drelien, 28. Beneath the fabric of his khaki shirt, pushed into the waistband of his trousers, a pistol bulges.

“We’re fighting against a system where we can’t eat and we don’t get paid. That’s why we’ve taken to the streets,” he explains as a jet flies in low overhead to land at the airport.

“The president [Jovenel Moïse] isn’t working for us,” Drelien adds.

“He’s no friend of the people. Only of the bourgeoisie and businessmen, while we live in poverty.

“It’s why young people have given up at school and taken up the gun. Because we need to defeat to this for ourselves.”

The sentiments are familiar in the crisis in Haiti that has flared up over the past year.

Intermittent protests have seen roads blockaded and offices and institutions associated with the government attacked, including the major’s office in the city of Léogâne, about 42km from Port-au-Prince, which was petrol bombed and looted.

But as a semblance of what passes for normality returns, the causes of the crisis remain amid evidence of a darker, more covert strand of violence now emerging: the supply of weapons and cash to armed gangs by figures on both sides.

While the proximate reason for the turmoil in Haiti has been a long running multi-billion dollar corruption scandal that has engulfed the presidency of Moïse, it has exacerbated tensions in a place long racked by brutal poverty and extreme inequality where political dishonesty has long been commonplace.

Central to the protests is the Petrocaribe scandal, a controversy that arose from a scheme to buy discounted oil from Venezuela on cheap credit. The idea was to free up funds for social schemes, but the money thus freed got pocketed by politicians.

The upwelling of popular outrage that greeted the official report into the scandal, which has tied Moïse to at least knowledge of the misappropriation, has played out in Creole slogans painted on walls demanding “Kot kob Petrokaribe?” (“Where’s the Petrocaribe money?”).

The scandal is debated angrily around the clock on radio talk shows, and denounced in the music of rappers, like Izolan, whose song Lage Pye Ou – Step On it – has been taken up by demonstrators.

Opposition spokesman Andre Michel believes the unrest is down to the culmination of several factors.

“The first is the circumstances around the election of Jovenel Moïse as president, a victory that was not accepted by the other candidates.

“The second is a structural issue. Ever since its foundation, Haiti has been ruled by an oligarchic minority who have held the country hostage. We have a political system that allows a small number of people to take all the country’s wealth.”

That, adds Michel, is the point dramatised by the Petrocaribe scandal.

“The money was supposed to pay for education, hospitals, roads and agricultural development,” he says of the billions misappropriated by those in government.

“Not a single hospital has been built or a single training centre.”

And the crisis is biting beyond politics. Disruption on the roads, combined with rising commodity prices and the depreciation of the Haitian gourde against the US dollar, has reduced the ability of Haiti’s poorest to buy food.

The dire state of affairs is summed up by security guard Junior Estinfort, 31, a father of two, who the Guardian meets outside the looted mayor’s office in Léogâne. Even before the attack on the building, he had not received his salary for six months.

Unlike many, Estinfort believes Moïse should serve out his term until 2022, but he complains the system has been “turned upside down”. “I’m relying on handouts from friends just to survive,” he says.

Much is spoken about “the system” in Haiti – la machine, as it is known colloquially. Talk of it is rivalled only by conversational use of the word pagaille, denoting utter chaos.

Even those associated with the government are critical. “It is a nightmare,” says Newton Louis St Juste, a government lawyer. “Everyone is fighting for power.”

If many of St Juste’s criticisms of the situation echo that of opposition figures, where he differs is blaming the opposition for many of the same sins as the government.

Both sides, he suggests, are implicated in violence and corruption – including in the Petrocaribe scandal – in a weak state where politics have been co-opted by business interests.

“On the one side you have an opposition that won’t wait for the next elections in 2022 and on the other a president who can’t deliver because he does not have the resources to solve the country’s problems.”

In a place where gangs are better armed than the police, he adds, a sense of impunity is running riot, from the white collar criminals and corrupt politicians at the apex down to the poorest slums.

Moïse – who critics say has rarely been seen outside the wealthy neighbourhood of Pétion-Ville, and who appears bolstered by the support of the US, which has sent senior diplomats in a show of solidarity – is more forthright.

He has referred to a plot by individuals with interests in Haiti’s energy sector to unseat him and accused the opposition of holding the country hostage, adding: “Is it the resignation of the president that will free the state? No, it is reform.”

For now, however, the trajectory is not negotiation or political process, but rising political violence that has already claimed dozens of lives.

Amnesty and other human rights organisations say they have validated claims of indiscriminate live fire on demonstrators by police. And other, more shadowy gunmen also appear to be at work.

According to the National Human Rights Defence Network, a Haitian NGO, in a single month between 16 September and 17 October at least 35 deaths occurred in the context of protests alone, including at least nine at the hands of the police. In the same period, they reported that more than 200 people were injured, including at least eight journalists.

In neighbourhoods like the capital’s Martissant, long notorious for its insecurity and lethal gang violence, credible local human rights groups suggest that political figures are arming and paying gunmen to settle scores against opponents on the street.

In a tiny, one-room house in Port-au-Prince’s Solino slum, Jean Charles Jean Clauzel, aged 41, and other anti-Moïse activists gathered to meet the Guardian. Jean Clauzel explains he has moved his place of residence multiple times, fearful of being targeted by paid gunmen.

His fears are apparently not without foundation.

According to a November report by the human rights group Fondasyon Je Klere, there may be reasons to fear that political assassinations are returning to the country’s politics.

Je Klere lists a number of incidents to underline its concerns, including several involving passengers in cars without number plates firing on demonstrations. The group also cites the killing on 29 September of the political activist Josemano Victorieux, known as “Badou”, whose murder has been marked by memorial banners draped over his Delmas 33 neighbourhood.

Jean Clauzel and the other activists have another reason to be concerned. Accompanying them is nine-year-old Dera Lourdjy, who was shot in the arm by an unseen gunman during a demonstration in the neighbourhood on 4 November. She is one of several children who have been caught in the crossfire.

“The situation is not good at all,” says Jean Clauzel. “It’s why many of the activists are trying to stay away from trouble. I’ve moved multiple times and I’ve only slept around seven nights in this house in total. If they find me, I’m worried they will kill me.”

If opposition figures point the finger at the government, it is a two-way street.

“The president has broken his promises. He needs to understand that people are tired and angry,” says Arnel Bélizaire, a charismatic former deputy and opposition leader who the Guardian meets at his warehouse, where workers are loading up a truck with planks.

“He does not respect democratic norms. He has become arrogant and refuses to resign.”

Barely two days after his interview with the Guardian, Bélizaire is arrested for allegedly attempting to deliver weapons and ammunition to the city of Jacmel with seven other individuals. He is accused of “conspiring against the state”, and images of the weapons are shared with the Haitian media.

Haiti’s crisis seems far from over.