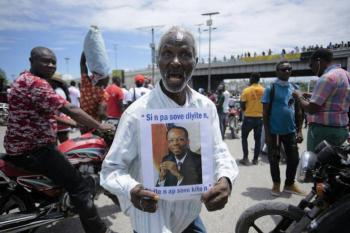 A demonstrator holds a picture of former Haitian president Jean-Bertrand Aristide at the start of a four-mile march to Aristide’s home in Tabarre.

Many supporters and sympathizers of former president Jean-Bertrand Aristide have begun a series of demonstrations around Haiti.

The first march took place on Thu. Jun. 16, 2022 in the southern city of Les Cayes. The demonstrators demanded that Aristide take the reins of the transition as president for a period of two years. The two year framework was first suggested by the coalition united under the Montana Accord, of which the president’s party, the Lavalas Family, was a signatory.

Then the party organized a large press conference on Tue. Jun. 21, 2022 at the International Lawyers Office (BAI) in downtown Port-au-Prince. Another demonstration was announced for the capital on Sun. Jun. 26, 2022, still within the framework of mobilizing the population to demand that Jean Bertrand Aristide be the man of the hour.

THE LAVALAS FAMILY WOULD NOT LIKE ARISTIDE’S APPOINTMENT AS PRESIDENT TO BE ANNOUNCED BY A TWEET FROM MADAME LA LIME.

Thus, thousands of demonstrators took to the streets of Port-au-Prince this past Sunday to demand that Aristide preside over the political transition. They marched from Place Resistance, at the intersection of the Delmas and Nazon Roads (known as the Airport Crossroads), to the residence of former president Aristide, located in Tabarre.

We cannot forget that long before this Lavalas campaign, there were other Transition candidates proposed, such as the senator of the Southeast Department, Joseph Lambert, who is the Senate’s president.

Then the Montana Accord’s National Transitional Council (CNT) organized an “election” at the Kinam Hotel on Sun. Jan. 30, 2022, which chose the the former central bank governor, Fritz Alphonse Jean, as president and former senator Steven Benoît, Prime Minister for a two-year transition.

It must be emphasized that this whole campaign for Aristide to be the president of the transition began immediately after the Jun. 8 visit to Aristide’s home in Tabarre of long-time U.S. State Department official Helen La Lime, representative of the United Nations Secretary General and head of the United Nations Office in Haiti (BINUH). She also leads the “Core Group,” a collection of ambassadors and international organizations which work to implement policies that insure Washington’s domination of Haiti.

“Long live Aristide” and “Aristide for Haiti, Haiti for Aristide” were some of the slogans chanted by the demonstrators. Other demonstrations are already planned for this well-orchestrated and programmed campaign.

Clearly, the Lavalas Family would not like Aristide’s appointment as President to be announced by a tweet from Madame La Lime. It would rather have it appear that Aristide accepted the position in response to popular demand, so as not to look too much like the de facto Prime Minister Ariel Henry.

The fact that the Lavalas Family is mobilizing the Haitian people after receiving a nod from U.S. imperialism’s principal caretaker is very significant, and even humiliating and shameful. Nothing is being clearly explained to the masses by Aristide or his party, but most of the Haitian people clearly see the game being played. Haiti already suffered defeats and setbacks when Aristide tried to strike a deal and make a jwèt dentelijans (match of wits) with Washington in September 1994 and in February 2001. Both experiments ended badly for him and the Haitian people. It is foolish to bend to the service of the Core Group instead of mobilizing the masses to be the architects of their own social transformation.

Accepting a post of President or Prime Minister of a Transition at the behest of someone like Helen La Lime has nothing to do with any popular legitimacy.