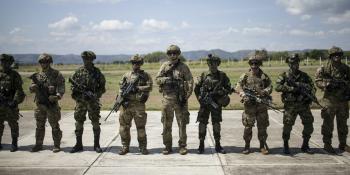 American and Colombian soldiers stand during multinational military exercises at the Tolemaida Air Base in Tolemaida, Colombia, on Jan. 26, 2020. Photo: Ivan Valencia/Bloomberg via Getty Images

MORE THAN a quarter of the ex-Colombian soldiers currently suspected in the assassination of Haitian President Jovenel Moïse received U.S. military training, The Intercept confirmed Friday, with some of the alleged attackers participating in programs as recently as 2015 that ranged from vehicle maintenance and professional development to counterterrorism and drug war operations. Courses were held in both Colombia and the United States.

The Pentagon and the State Department are currently reviewing internal records to determine precisely how many of the alleged assassins were trained by the U.S. “To date, State and DoD have identified seven individuals among a possible 25 alleged to have been involved by Haitian authorities, that previously participated in past U.S. military training and education programs, while previously serving in the Colombian military,” a U.S. government official confirmed in an email to The Intercept. “Individuals had been approved for a variety of training activities held both in Colombia and the United States between 2001-2015.”

On Thursday, the Pentagon confirmed to the Washington Post that “a small number” of the Colombian mercenaries suspected in the July 7 assassination had received U.S. training, though the department did not say how many, nor when, nor what type of training was provided. According to the official who spoke to The Intercept, “Examples of the types of training received were various types of military leadership and professional development training, emergency medical training, helicopter maintenance, and attendance at seminars on counter-narcotics and counter-terrorism.”

From 2000, when the United States first launched the massive, multibillion drug war aid program known as Plan Colombia, to 2018, the U.S. administered more than 107,640 trainings of Colombian security personnel, noted Adam Isacson, director of the Defense Oversight program at the Washington Office on Latin America, a figure that far surpasses any other military collaboration the U.S. maintains in the region. “Nothing comes close to 107,000 over the last 20 years,” Isacson told The Intercept. “Nothing.”

Eighteen former Colombian soldiers are currently being held in Haiti in connection with Moïse’s assassination, including some who previously served in elite Colombian special operations units. New details on their involvement in the assassination continue to break by the day. On Wednesday, the Colombian news magazine Semana reported that one of the former soldiers confessed that the mercenary team was responsible for the assassination and that the killing was orchestrated by an inner circle of seven mercenaries within the larger group. The magazine reported that investigators had also recovered surveillance footage of the attack.

Family members of many of the detained Colombians have said that their loved ones believed they were being hired to provide personal security for a VIP in Haiti and that they did not sign on to participate in an assassination. Speaking to reporters Thursday, Colombian President Iván Duque said that regardless of individual levels of insight into the operation’s true intent, all would be held responsible for Moïse’s killing.

To Isacson, little about the kind of training the alleged assassins experienced with the U.S. military stood out as particularly unique given the long-standing relationship between the U.S. and Colombia: In any random sample of some two dozen mid-level Colombian military veterans, it is more likely than not that some amount of U.S. training would turn up. “They’re not training every recruit or every private, but they are training a lot of people at that level,” Isacson said. “So it’s very likely they would have received us trading just through sheer statistical probability.”

Still, Isacson argued, the fact that the mercenaries’ training was not unusual does not mean there is not reason for concern. “I worry about the United States being associated with or even increasing the lethal skills of military and police units around the region that are either abusive or corrupt or undemocratic, and of course that’s always been a huge risk in Colombia, given its human rights record. So it does require a lot of scrutiny to make sure that we are not associating ourselves with or improving the lethal skills of people who end up doing what we just saw in Haiti, but also people who end up doing what we just saw in Bogotá and Cali since late April,” he said, referring to recent and violent crackdowns by Colombian security forces on protesters. “We don’t want to be associated with that.”