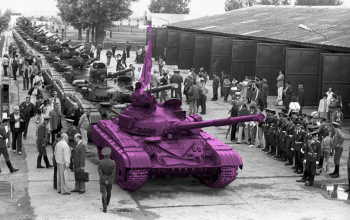 Left media should explore a wide range of critical ideas. But it should try to avoid ‘punching down’ too often.

Recently new left outlet The Breach published a long interview with Columbia University PhD student Barnaby Raine “on the resurgence of ‘tankie’ and ‘campist’ politics” titled “Is the enemy of my enemy my friend?”

It was an odd choice. Unlike The Breach’s other stories, there’s nothing about Canada in the interview and it’s a republication of a radio interview rather than unique content.

The article is largely an effort to psychoanalyze anti-imperialist politics that ‘go too far’. But it ignores maybe the most significant and charitable explanation. Serious leftists and internationalists are rightly cautious about contributing to the demonization of a government/country facing the wrath of the dominant empire. Amidst foreign intervention and demonization some seek to stake out a position that forces open the debate. While this can open space for discussion, it is generally a moral and tactical mistake to glorify a leader simply because they are in the crosshairs of the dominant imperialist power.

Enemy of my enemy is my friend thinking does creep into some left discourse. But its negative impact is inconsequential compared to left support for imperialism.

For example, during the recent federal election, the NDP formally supported Canadian participation in the nakedly imperialistic Haiti Core Group. They also called for Canada to join the newly formed AUKUS, which stokes nuclear proliferation and tension with China. The party also wants to spend $100 billion ($350 billion over lifecycle) on new fighter jets and naval vessels that are largely designed for US and NATO wars.

This is the tip of the iceberg, as I detail in Left, Right: Marching to the Beat of Imperial Canada. In the two decades after World War II the NDP’s predecessor and Canadian unions supported the creation of NATO, the Korean War, Canada’s role in the assassination of Patricia Lumumba, etc.

During the 2017 NDP leadership race I asked Niki Ashton at a private gathering whether she voted in favour of bombing Libya. The NDP leadership candidate said she and a few other MPs sought to dissuade then-leader Jack Layton from supporting the NATO war. Failing to convince him, Ashton said she couldn’t remember if she voted yes on Libya or was absent.

A Canadian general led the 2011 NATO bombing of Libya, which was vigorously opposed by the African Union. AU officials argued the war would destabilize that country and the Sahel region of Africa, which is what happened. Who knows how many tens of thousands died directly or indirectly from that conflict.

Despite her position on Libya, I paid $5 to become a member of the NDP to vote for Ashton and even asked some friends to do the same. She was significantly better than the other candidates on international affairs and most other issues and I was willing to accept her failure on Libya in the belief that Ashton would move the party in a better direction.

Only one of 308 members of the House of Commons voted against bombing Libya. While the former Green leader should be applauded for doing so, Elizabeth May actively supported Canada’s campaign to oust Venezuela’s elected government, participated in efforts to ramp up hostility towards Tehran and forced her party to hold a special convention after members passed a resolution supporting Palestinian rights.

From NGOs to unions, well-known left commentators to progressive publications, the pattern is largely the same. Most are quiet on foreign policy or explicitly support harmful elements of it. The National Observer, for instance, is overtly imperialist while media watchdog Canadaland regurgitates the dominant perspective on a subject where media bias in favor of power is most stark (as I detail in A Propaganda System: How Canada’s government, corporations, media and academia sell war and exploitation). The best columnist given a platform in the corporate media, Linda McQuaig (a Breach advocate) has repeatedly mythologized Liberal foreign policy hero Lester Pearson who helped establish NATO, dispossess Palestinians and aided the US war in Vietnam.

In The Trudeau Formula: Seduction and Betrayal in an Age of Discontent Breach managing editor Martin Lukacs ignores the Liberals’ role in creating the Lima Group and campaign to recognize Juan Guaidó as president of Venezuela. He omits a discussion of Trudeau backing abusive Canadian mining companies abroad, anti-Palestinian positions or failure to restart diplomatic relations with Iran. There’s nothing about Trudeau sending 500 troops to Russia’s border in Latvia or leading a NATO mission in Iraq. The only foreign policy issue dealt with in detail in the book is Canada’s massive Light Armored Vehicle sale to Saudi Arabia, which has been discussed on the front page of the Globe and Mail at least a dozen times.

The reality is few publications and groups challenge Canadian imperialism. Even fewer are willing to mention left support for imperialism.

If The Breach doesn’t want to be seen as ‘punching down’ I’d suggest that for every attack on “tankies” they publish they run 10 articles criticizing the NDP’s foreign policy.