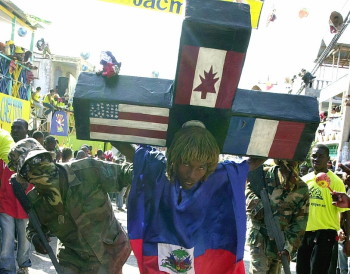 Dismantling the unelected and colonialist CORE Group is the first step to loosening the imperialist stranglehold over Haiti.

On a hot August afternoon, members from Solidarité Québec-Haïti, a group rooted in Canada’s Haitian diaspora community, gathered In front of the Canadian parliament buildings in the capital city of Ottawa. They chanted and waved placards displaying a straightforward but powerful request: “Let Haiti Breathe.”

Haiti could breathe, they argued, if the CORE Group was disbanded, taking its collective boot off of Haiti’s neck, and thus giving the Haitian people a chance to get out of an extended state of crisis.

Canada and the United States are central members of the CORE Group, a group of unelected, unaccountable power brokers in Haiti, that also include representatives from the European Union and Organization of American States. The CORE Group was directly responsible for overseeing and legitimizing deeply flawed electoral coups in 2011 and 2017 in which their handpicked candidates Michel Martelly and Jovenel Moïse of the PTHK party came to power. Both Martelly and Moïse would amass lengthy records of widespread corruption, human rights abuses, and deeply authoritarian practices. And both could rob and kill their fellow Haitians with impunity because they had the financial and military support of the CORE Group (via the United Nations Stabilization Mission in Haiti, or MINUSTAH).

After Moïse’s assassination, the CORE Group insisted that Ariel Henry, who was appointed by Moïse but had yet to be sworn into office, would be Prime Minister of Haiti. They wanted Henry to guide Haiti towards uncertain elections and a constitutional referendum slated for November 7. However, Henry has recently disbanded the unelected Electoral Commission, claiming that elections are to be postponed into the new year as he “reviews” the constitution - seemingly following the authoritarian trend that Martelly and Moïse had implemented.

By any standard of comparison to the hell that the CORE Group has unleashed on Haiti, the Jean Bertrand Aristide / Lavalas-led years were successful when it came to the meeting the supposed criteria of bourgeois democracy, the funding and delivery of public services, managing state finances, and cultivating institutional democratic procedures backed by the rule of law. During the 1990 election, Aristide was elected with 67% of the popular vote, with the second-place candidate only garnering 14% of the vote. During the 2000 election, the small but powerful Haitian elite boycotted the election with the support of the US and Canada, resulting in Aristide gaining 90% of the vote. The support for Aristide and the broader Lavalas political movement was unprecedented, especially when compared to the dismal voter turnouts during the sham elections which brought Martelly and Moïse to power.

The biggest problem is that Aristide undertook what can be considered a national plan of pragmatic, moderate reforms which went against the economic interests of the traditional Haitian elite, with their deep ties to the Duvalier dictatorship. Aristide’s government made plans to implement a national minimum wage, to tax both the rich and corporations for the first time, to disband the military, and to divert these resources into medical, educational and social service provision. It managed to do this during a time of aid embargoes; under the Dole Amendment , no US funding went to the Aristide administration and was channeled to non-governmental organizations (NGOs) instead.

Because of the unprecedented levels of popular support for Lavalas, this political experiment produced very powerful enemies domestically and internationally. In 2010, Peter Hallward argued that “For the last twenty years, the most powerful political and economic interests in and around Haiti have waged a systematic campaign designed to stifle the popular movement and deprive it of its principal weapons, resources and leaders.”

The coup d’etat of February 2004 began the process to destroy Haiti’s experiment with popular democracy - forcing Aristide out of the country yet again. In the two years that followed, medical journal The Lancet outlined the campaign of eradication which targeted the broader political base of Lavalas, with an estimated 8,000 people targeted by forces closely linked to the country’s anti-Aristide right wing. The pattern of police, paramilitary , and gang involvement in these massacres would continue under both Martelly and Moïse, with well documented attacks taking place against opposition strongholds from November 2018 in La Saline (71 killed), the September 2019 Bel Air (24 killed), to Cite Soleil from May to July 2021 (145 killed). These communities were targeted for being perceived as critical launchpads for the widespread protests which had consumed Moise and the PTHK for the past three years, in response to the theft of the $3.8 billion in public funds from the PetroCaribe program.

The CORE Group remained silent on these massacres, the repeated crackdowns on peaceful protests, the targeting of human rights defenders, ignoring the rampant, harmful corruption of the PTHK and wholesale subversion of democratic institutions. None of this is surprising, considering the historical animosity that both the imperialist powers and Haitian elite have had towards the Haitian masses and their oft-interrupted but determined program for radical, grassroots democracy. Based on the wide body of evidence available, it is clear that the CORE Group would rather see conditions in Haiti deteriorate to the point of collapse rather than to concede power to what Wikileaks described in 2008 as “resurgent populist and anti-market economy political forces.”

In order to contain this popular and wide ranging collective, who have consistently championed genuine, grassroots democracy, and the accompanying dismantling of the economic status quo, the imperialist powers and the Haitian elites have been fighting what can only be described as an undeclared, suffocating war against the Haitian masses since 1991. A war which has manifested itself in two coups, a 13 year military occupation, sham elections, systemic massacres against political opponents, a cholera outbreak, widespread pillaging of public funds, all compounded by earthquakes and hurricanes.

This war is the primary reason the more recent caravans of Haitian refugees and asylum seekers number into the tens of thousands - they are fleeing a war that the CORE Group has perpetuated but many refuse to acknowledge.

Within this political and economic context, elections cannot solve all of Haiti’s problems, and as demonstrated by the 2011 and 2017 electoral coups, if they are forced through without popular support, they can take the country backwards. For those that remain and voice their demands for Haitian self-determination, the threat of direct state sanctioned violence looms large, as elections can only really be useful if popular forces have been given space to breathe, discuss, disagree and organize. The sole purpose of the CORE Group’s presence in Haiti is to ensure this could not happen.

This is why the protests and organizers have faced violent crackdowns and the past two elections were tightly controlled. Political parties were banned, many leaders were killed or forced into exile as a way to cut off oxygen to any popular alternative, preventing any popular alternative from emerging, participating or gaining ground.

The problem for the CORE Group now is that the popular movement has been building across sectors, building on the streets and in their communities, and redefining and shifting its positions. With so much attention on Haiti right now, we must take up the advice of former Lavalas organizer Patrick Elie, who said that the best way to help Haiti is to become citizens of our own countries. This means that those of us in the Haiti solidarity movement have a responsibility to shine the light on how our own governments within the imperialist CORE Group are complicit in the war against Haiti, and get them to back off. As the comrades of Solidarité Québec-Haïti , have demanded, “Let Haiti Breathe.”

Kevin Edmonds is a member of the Toronto-based Caribbean Solidarity Network (CSN), an organization committed to the principles of Caribbean Liberation and Unity across the region as well as throughout the Diaspora (https://www.caribbeansolidarity.org/ ). He is also an assistant professor in the Program in Caribbean Studies at the University of Toronto.