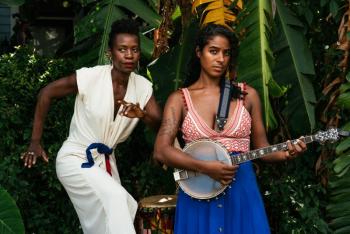 Radio Haiti-Inter was the first independent radio station on the Caribbean island. Founded by activist and journalist Jean Dominique, it broke the mold and achieved mass popularity by standing up to government corruption and media suppression in the language of the people, Haitian Creole.

Host Frank Stasio talks to musician Leyla McCalla and director Kiyoko McCrae about their show 'Breaking the Thermometer to Hide the Fever,' about Radio Haiti-Inter. McCalla also performs live in the studio.

Dominique was assassinated in April 2000, and the station disbanded soon after due to continued threats of violence. The archived recordings from Radio Haiti-Inter are housed at Duke University and are now featured in an artistic revival of the station. Leyla McCalla, formerly of the Grammy-winning Carolina Chocolate Drops, digs into her Haitian-American identity in collaboration with director Kiyoko McCrae, in their exploration of diasporic culture and political resistance.

Host Frank Stasio is joined by McCalla and McCrae to hear samples from the performance and to discuss the process of transforming boxed archival materials into a multimedia revival. Duke Performances’ “Breaking the Thermometer to Hide the Fever” is on stage at The Rubenstein Arts Center in Durham on Thursday, March 5 and Friday, March 6 at 8 p.m.