Liberals go from #WelcomeToCanada to deportations 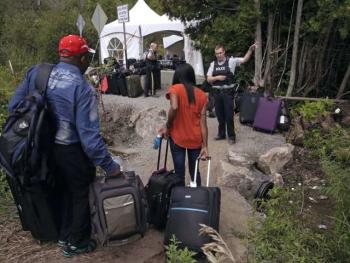 A migrant couple approaches an RCMP tent on the border in St. Bernard-de-Lacolle, Que., to enter Canada illegally on Aug. 7, 2017. CHARLES KRUPA/AP

The refugees that made such useful props for Trudeau in the last election have become an obstacle to his chances in the next. So, over the side they go

Naturally, they put it in an omnibus bill.

Buried deep inside the 392 pages of Bill C-97, the budget implementation bill, is a package of amendments to the Immigration and Refugee Protection Act that would turn decades of Canadian refugee policy on its head.

The changes would disqualify from consideration refugee claimants who had previously made claims in “a country other than Canada.” (Also ineligible: those whose claims had already been rejected in Canada, or who had been granted refugee protection elsewhere.) What is more, this would apply even to those already on our soil, seeking asylum.

Ever since the Supreme Court’s landmark 1985 ruling in Singh v. Canada, refugee claimants under the protection of Canadian law cannot be deported without having their case heard before an independent tribunal — a recognition of the serious, possibly fatal consequences of sending a genuine refugee, with a “well-founded fear of persecution,” back to his country of origin. Under the new policy, the best that those affected could hope for would be an interview with an immigration official, as part of a “preremoval risk assessment.”

All this came as a complete surprise to refugee advocates. The only mention of it in the budget the bill claims to be implementing was this cryptic remark on p. 326: “The government proposes to introduce legislative amendments to the Immigration and Refugee Protection Act to better manage, discourage and prevent irregular migration.”

They could hardly have guessed what this would turn out to mean. The changes not only go far beyond the existing Safe Third Country Agreement with the United States, which allows Canada to turn back claimants arriving at official points of entry on our southern border — not once they have already crossed — but would extend it to a number of other countries with whom Canada has immigration “information-sharing” agreements.

Understand: the people whose claims Canada would summarily reject in this fashion would not necessarily have had their claims assessed and rejected by another country – it would be enough that they had made a claim. They would face deportation, what is more, not to the country in which they had earlier made their claim, but to their country of origin, to meet whatever fate awaited them there. All this, without even the right to an independent hearing.

This sort of draconian shift in policy would be shocking coming from any government; among other objections, the courts are almost certain to rule it is a violation of the Charter of Rights. But to find it proposed by the same Liberal government that had long congratulated itself for its commitment to refugee rights, while castigating critics as intolerant, racist and worse, is simply breathtaking.

This is not just the most extraordinary about-face yet — from #WelcomeToCanada to deportations without hearings, in the space of two years — from a government that has made a habit of them. It is a fundamental breach of faith.

“We will restore Canada’s reputation,” the Liberals boasted in the refugees section of their 2015 election platform, “and help more people in need through a program that is safe, secure and humane.”

“Canada once welcomed refugees openly,” it goes on, “but that proud history has faded after a decade of mismanagement under Stephen Harper. We will renew and expand our commitment to helping resettle more refugees, and deliver a refugee program that is safe, secure and humane.”

But that was then, and the refugees that made such useful props for Justin Trudeau in the last election have become an obstacle to his chances in the next, in the face of relentless Tory fear-mongering about the “crisis” on our border. So, over the side they go.

That this was accomplished via yet another mammoth omnibus bill compounds the sense of betrayal. The 2015 Liberal platform also denounced the Harper government for its use of omnibus bills “to prevent Parliament from properly reviewing and debating his proposals,” vowing to “bring an end” to “this undemocratic practice.”

When the bill comes to a vote, moreover, Liberal MPs will inevitably be whipped to support it — as a budget bill, after all, it is an automatic confidence matter. This turns yet another Liberal campaign pledge inside out.

The platform had promised that MPs would be free to vote as they pleased on virtually all questions; outside of confidence matters, the whips would be applied only to votes that “implement the Liberal electoral platform” or that touch on “the protections guaranteed by the Charter of Rights and Freedoms.” In this case, MPs will be whipped to vote for a bill that contradicts the platform and runs roughshod over Charter guarantees.

Mere hypocrisy or breach of faith, however, would not suffice to condemn the Liberal changes, if they were otherwise well-advised. It would be obtuse to hold a government to the course it had set out on, however disastrous, just for the sake of a foolish consistency. Those Conservatives who are now attacking the Liberals for adopting the very positions for which they had previously attacked the Conservatives – on top of the changes in the omnibus bill, the government was earlier reported to be in negotiations with the United States to extend the Safe Third Country Agreement to the entire border — are entitled, perhaps, to gloat. They are not entitled to claim vindication.

No, what is wrong about the new Liberal policy is not that it is hypocritical, but simply that it is wrong: arbitrary, inhumane, and vastly unnecessary. There is no emergency that could possibly justify rejecting refugee claimants out of hand, solely on the basis of having made a prior claim, — “asylum-shopping,” the Border Security minister, Bill Blair, called it, without apparent sense of shame — still less deporting them without a hearing. The numbers of those crossing the U.S.-Canada border irregularly are falling, not rising.

The emergency, rather, would appear to be in the falling numbers of those telling pollsters they intend to vote Liberal. For what is the risk of sending innocent people to their deaths, when there are marginal seats in peril?