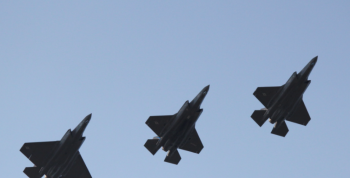 Canada's stated rationale for buying new warplanes is that: "A modern fighter jet fleet is essential for defending Canada and Canadian sovereignty and contribute to our NORAD and NATO commitments, now and in the future."

Those few words are the basis of an estimated $76.8 billion public expenditure.

A new fighter jet will be selected early next year and the government will sign a $19-billion contract with its manufacturer by late next year.

That also means at some point this year or next year there will be a process in which the United States will approve that selection.

Patrick Finn, the assistant deputy minister of materiel at the Department of National Defence, says: "Ultimately when we select, when we are into the detailed design, at some point, yes, the U.S. will have a role to play in ultimate certification."

Finn reassures: "But the Americans won't be sitting with us with the evaluation and doing that type of work. It will be us."

Joseph Crook, a spokesperson for the U.S. Embassy in Canada, further confirms: "We continue to believe in the importance of NATO and NORAD interoperability as a crucial component of Canada's acquisition of defence assets."

NATO explains: "An alliance of 30 nations can only work effectively together in joint operations if provisions are in place to ensure smooth cooperation."

It further highlights: "Interoperability has become even more important since the alliance began mounting out-of-area operations in the early 1990s."

The Canadian Press has noted that part of that interoperability includes the new fighter jets Canada is to buy complying with the standards required for handling top-secret intelligence from the Two Eyes and Five Eyes security networks.

Both networks include the United States.

The U.S.-manufactured F-35s and F-18s are compliant with these standards; the Swedish-manufactured Saab Gripen is not.

In terms of sheer numbers within NATO, the Lockheed Martin manufactured F-35s and the Boeing built F/A-18E Super Hornets also win out.

The interoperability of fighter jets and other military equipment within NATO has been presented as an approach that makes common sense. Things need to be able to work together, but the requirement also heavily favours U.S. transnationals.

"NATO has 19 members, 17 of them European. Yet 70 per cent of the warplanes and most of the weapons that the alliance has used in Yugoslavia were American-made. All the Tomahawk missiles came from Raytheon Co.; all the B-2 stealth bombers rolled off assembly lines at Northrop Grumman Corp.; and all the heavy transport planes were built by Boeing Co. and Lockheed Martin Corp."

In 2020, the United States spent $778 billion on military expenditures. The next nearest NATO member, the United Kingdom, spent $59.2 billion.

The five biggest weapons manufacturers in the world are American. The top two are Lockheed Martin (with $53.23 billion in sales in 2019) and Boeing (with $33.15 billion in sales).

Added together, this means the interoperability requirement within NATO benefits these two companies seeking to sell Canada new fighter jets.

It also means that as NATO gets bigger -- it now has 30 member countries, having expanded by 13 countries since 1999 -- there is a growing market for U.S. weapons manufacturers.

Notably, Bruce Jackson, who founded the U.S. Committee to Expand NATO in 1997 was also a Lockheed Martin executive in charge of finding new international markets for the company.

Vice has commented that the admission of Eastern European countries into NATO "was probably one of the biggest arms deals of all time, since new NATO members were required to junk their old Soviet military hardware and replace it with Western arms -- like the stuff made by Lockheed Martin."

There's money for transnational corporations in the militarized peace of NATO and interoperability, just as there is profit in war (Raytheon stock increased $5 billion in value after the U.S. launched 59 of the company's Tomahawk missile against Syria in 2017).

Building a genuine peace means having to challenge the profitability of both armed peace and war. For now, effectively challenging next year's decision to commit spending $76.8 billion on new warplanes also includes understanding the business logic of NATO.

Brent Patterson is an activist and writer.