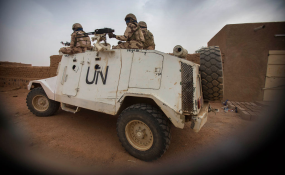 Canada will soon take part in its first peacekeeping mission to Africa since Rwanda in 1994, sending peacekeepers, backed by helicopters, to join UN Blue Helmets in Mali before autumn, Canadian media reported late on Friday.

The commitment comes amid pressure on Canada from Germany and the Netherlands to send a deployment, with the Canadian helicopters expected to replace a German contingent, CBC News said, citing a senior government official.

The deployment would be for a planned 12 months, according to the report.

German Defense Minister Ursula von der Leyen said in November that German combat and rescue helicopters would end their deployment in Mali, adding that another partner was meant to take over "probably by summer next year."

She stressed that the Mali mission was "enormously dangerous." Two German soldiers died in Mali in July last year when their helicopter crashed.

The German Bundeswehr is supporting both the EU and the UN peacekeeping missions in the troubled West African nation. The German Cabinet recently decided to send an extra 100 soldiers to join the UN mission there, increasing the German contribution to a maximum of 1,100 officers.

Canadian Prime Minster Justin Trudeau promised in 2016 to send as many as 600 troops to join UN peacekeeping operations in Mali. However, in November last year, he said Canada would support UN missions by mobilizing a "quick reaction force" of 200 soldiers to any one spot.

The UN mission in Mali, called MINUSMA, is one of its deadliest, with at least 155 peacekeepers killed since 2013.

The country has been unstable since separatist rebels, and then Qaida-linked militants, took control of the desert in the north in early 2012. Although they were largely driven out by a French-led military operation launched in January 2013, rebel activities continue in some areas despite the signing of several peace agreements.

The United Nations has some 15,000 peacekeepers in Mali.