Marine accused of smuggling guns to Haiti brought back to US. Judge orders no bail 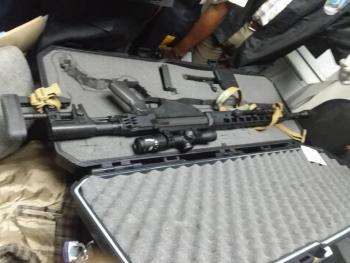 A U.S. Marine who allegedly landed in the Haitian capital with guns and ammunition is back in the United States, and a federal judge ordered him held without bail this week.

Police arrested Jacques Yves Sebastien Duroseau when he arrived at the Port-au-Prince airport on Nov. 12, according to a federal indictment.

Duroseau is a native of Haiti and a firearms instructor serving on active duty with the Marine Corps, court filings show. He was indicted on federal gun-smuggling charges on Nov. 27 and brought back to Jacksonville, North Carolina, near Camp Lejeune, on Dec. 11.

When U.S. investigators asked him why he brought so many weapons into a country with an arms embargo, he told them he wanted to help train the Haitian military, records show. An unnamed “known individual” told federal investigators that Duroseau “wanted to help Haiti and wants to become President of Haiti,” the indictment said.

Investigators said Duroseau had eight guns with him when he landed in Haiti: five handguns and three military-style rifles. He also had a box full of ammunition and body armor in his checked luggage, court filings show.

The indictment said he declared the guns and ammunition with American Airlines when he checked the bags onto his flight from New Bern, North Carolina, bound for Haiti with connections in Charlotte and Miami.

Officials in Haiti said “they became suspicious when they saw the three black cases, two of which were long. Most often the cases mean guns are inside,” the Miami Herald reported.

Despite a U.S. arms embargo in Haiti, there are an estimated half-million guns in circulation in the country, according to the Herald.

Duroseau told federal agents he “picked every gun” in order to teach Haitian soldiers marksmanship, according to the indictment.

He told investigators he knew bringing the weapons and body armor to Haiti was illegal, federal agents said in the indictment.

Duroseau told investigators after he was detained that the arrest was part of his plan to get attention in Haiti and “gain a platform to make a statement,” the court filing said.

“I know why I brought (the guns),” he told Naval Criminal Investigative Services investigators, according to the indictment. “It’s still a part of the attention I need.”

The indictment said Duroseau told the agents that he hoped to “wear the uniform of the military that’s been established” and “defeat the thugs that have been creating a little bit of part of the instability in Haiti,” the indictment said.

Duroseau is being represented by public defender Edward Gray in Raleigh. Gray did not immediately respond to requests for comment.