Mario Joseph: In pursuit of human rights in Haiti 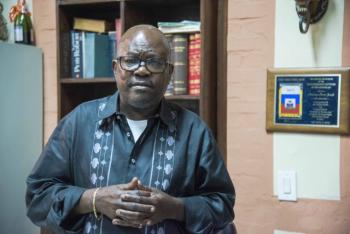 translated to English by the IJDH (Institute for Justice & Democracy) Staff

Behind the calls for justice for victims of sexual assaults committed by UN troops and especially the UN’s acknowledgement of the introduction of cholera by the Nepalese contingent of the UN’s blue helmets, there is a man who has been fighting for years to obtain justice for the most oppressed among us. This man, Mario Joseph, Esq., has been engaged in the struggle for human rights for over twenty-four years. He has never shied away from defending the most vulnerable victims of human rights abuses – particularly poor women or girls who have been raped and who cannot afford to pay legal fees necessary for filing charges against their assailants.

In 2016, the United Nations officially recognized its responsibility for the introduction of cholera to Haiti. The UN’s recognition, even if it was not followed by compensation for the plaintiffs, was one of the greatest victories in Mario Joseph’s long career as a lawyer. When the government in power at the time chose not to penalize the United Nations for having introduced cholera to Haiti, Joseph filed suit against the UN in the name of 5,000 victims of this disease that had infected nearly 800,000 people and caused approximately 10,000 deaths.

The case against the UN, considered by some to be dead on arrival, was an undeniable success. However, it is not the longest legal battle Mr. Joseph has fought. Mr. Joseph’s most-enduring project has been providing support and assistance to victims of rape throughout Haiti. Even if these cases do not bring him recognition or enhance his reputation as did the case against the UN, he has consistently devoted his time and energy to them. Over the years, he has gained experience and perfected strategies to improve the support given to victims of rape (whether the rapists were Haitians or blue helmets.) His tenacious personality took form at a young age – first in his birthplace of Verrettes and then in St-Marc where he began his career as a young lawyer – as a militant for human rights and a member of the Democratic Movement Congress (CONACOM). He feels a natural sympathy for the victims whom he has defended throughout his career.

Between 1996 and 2000, when Joseph was asked by President René Préval and his Minister of Justice Max Antoine to represent the victims of the Jean-Rabel massacre, he began to encounter victims of rape. “After the coup d’Etat in 1991, the paramilitary group FRAPH engaged in acts of politically-motivated rape. I tried to defend the victims of these rapes, despite the flaws within the justice system because these acts were unacceptable. Shortly after he joined the Bureau des Avocats Internationaux, which had been founded by President Aristide upon his return from exile. He was unable to seek justice for the victims of the Jean-Rabel massacre because the trial never took place. Nonetheless, he emerged from the process as a seasoned fighter who had found his mission: defending poor people and helping them obtain justice.

He is currently devoting his time to the defending the rights of women and girls in poor neighborhoods who have been victimized by rape. In the aftermath of the 2010 earthquake, there was a surge of rapes in displaced persons’ camps. The Bureau des Avocats Internationaux (BAI), with the support of the Institute for Justice and Democracy in Haiti (IJDH), has undertaken a number of initiatives to assist these victims of rape. Mario Joseph is going to help them defend their cause by teaching them to speak more effectively, to organize, to demonstrate, or to engage with the judiciary/JUSTICE system to defend their rights. This is a winning strategy, because in this new stage of his career, he will be busier than ever.

“During public festivals and celebrations at least two women per day and at other times about two women per week” seek assistance at the office of the Bureau des Avocats Internationaux. According to Mario Joseph, these numbers reveal the ongoing nature of these acts of sexual violence, but also the reassurance that there will always be someone at the BAI to listen to their story and to assist them. Recently, the BAI joined with international partner organizations and with several women’s organizations in Haiti to launch the Project for Rape Prevention and Accountability in order defend poor Haitian women and girls victimized by rape.

According to Joseph, the victims of these rapes are generally women from underprivileged backgrounds. Since these victims are too poor to pay legal fees, they are often unable to seek justice for the violent and degrading assault they endured. Mr. Joseph explains that the legal support he provides to these women is multidimensional. It begins with the filing of a complaint and continues throughout the judicial process, including referrals to appropriate health services and presenting the cases favorably to the media. “The IJDH and BAI are working towards eliminating the systemic attitude of dismissiveness toward accusations of rape which adds to the pain of the rape itself for victims and increasing awareness of the impact of sexual violence throughout the judicial system and in society at large.”

Mr. Joseph has not won all the battles he has fought. In fact, very few conclusive results have been achieved. According to him, there are perpetrators within the justice system who prefer to blame the victims for the clothes they were wearing or for being in the place where the rape occurred. “In the Prosecutor’s Office in Port-au-Prince, we have encountered government commissioners who decide to drop charges against the accused rapists without giving us the time to file an appeal. Every single day, our justice system fails to protect women and girls victimized by rape. This is the wrong response. Corruption and impunity only serve to further encourage rapists.” He added that society must end this hypocrisy and treat all victims, especially those from poor neighborhoods, with the same rights as every other human being.”