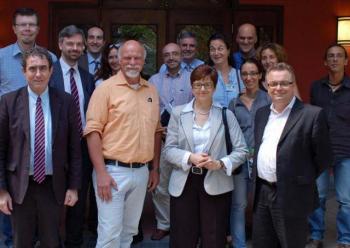 The following is a report by a Haiti Support Group (Great Britain) delegation to Haiti and is published on the HSG website, April 23, 2012.
We have arrived in Port-au-Prince as part of our 18 month campaign to move the European Union development policy more towards meeting the crucial needs for sustainable agriculture and better coordinated and effectively governed aid delivery that meets the true needs of the poor majority.
Our visit comes on the back of a very timely report by a delegation of the European Parliament’s Budget Control Committee. The Haiti
Support Group, together with 'Coordination Europe-Haiti' and a Haitian civil society leader, briefed the delegation before its departure in February and ensured that it did not just meet the usual assortment of inter-governmental organisations and government representatives, but also heard from local civil society organisations with many years of development experience.
The objective of the delegation was to investigate whether the EU aid after the 2010 eartquake has been well managed and controlled and whether the channelling mechanisms of the aid proved efficient and accountable.
The delegation was aware that that all has not been well as a European Parliament (EP) Resolution of 2 February 2012 found inefficiencies and lack of transparency in the ECHO accountability structures pointing out that “the Commission did not provide Parliament’s rapporteur with the … reports of the ECHO partners on the implementation of humanitarian actions … on the grounds that they included sensitive information on ECHO partners; stresses that Parliament must have access to such reports, ….”
The delegation was even less impressed with what it found in relation to the development aid funds dispensed by the EU since the eartquake. It is worth reading the full recommendations at the end of the delegation’s report, but the most important ones are to us the following and they include some very clear requests for the Commission but also for the GoH to improve its game:
“ Deplores the lack of sustainability of some projects and stresses that projects should principally aim at creating employment … which would allow the Haitian State …. to depend less on foreign assistance; requests therefore the Commission to provide Parliament with a list of projects which have been carried out during the last 15 years with a detailed assessment of their current situation … to see how sustainable they are (sic) since;
“Deplores the fact that in spite of the fact that the government consists of some 18 ministers and 19 secretaries of state, no one is in charge of housing; urges the Haitian authorities to work out a comprehensive strategy/action plan for (social) housing …; takes the view that should this not happen the EU support for the Haitian State would need to be reduced or even discontinued...”
“Points to the problem of traceability and accountability of development funds; … insists on linking Budget Support to performance and in particular … the fight against corruption by the Commission and the Haitian government …”
“Finds that control systems where EU funds are spent via Government channels in Haiti are in general inadequate …. stresses the need that the Haitian authorities assure a major improvement as regards control over expenditure as well as its effectiveness, efficiency and sustainability; takes the view that funds shoild be channelled through the recently created Haitian Procurement Agency…”
We shall be seeking to follow up on these recommendations and with our friends in Haiti provide further suggestions for improvements to the operation of what is Haiti’s biggest donor.
Aid through the State is right in principle so as to lead to an ability to provide services and thus become independent if aid - but it requires a strong CSO sector to monitor State budgeting and spending. The EU meanwhile needs to assist from its end with increased transparency.
To begin to do so we need a lot more information about the EU’s projects in Haiti – information which should rightly be available to the EU taxpayer who funds all the work; and to Haitian civil society so it can assess whether the aid has been delivered competently and to the right priorities.
Full report of the members of the European Parliament:
http://www.europarl.europa.eu/meetdocs/2009_2014/documents/cont/dv/feedbackreport_haiti_/feedbackreport_haiti_en.pdf.