Military is off the radar of most Canadians: DND poll 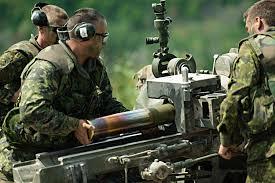 Most Canadians seem only vaguely aware they have a military and are decidedly confused — or uncertain — about what it does, according to new research conducted for National Defence.

The biennial report, carried out this year by Earnscliffe Strategy Group, found that while general and specific knowledge was low, appreciation for individuals who serve was high.

The findings stand in abrupt contrast to surveys over the last decade, where the Afghan war seared awareness of the military into the public consciousness.

The inconspicuous profile is a significant challenge for a military that is attempting to increase the size of the regular and reserve forces.

"Awareness of and familiarity with the [Canadian Armed Forces] was generally very low; virtually non-existent among those in the younger age group," said the research report, which included focus groups and a telephone survey conducted last winter and spring.

"Indeed, few had recently seen, read or heard anything about the [Canadian Armed Forces]."

Only 26 per cent say they had some awareness of what the military had been doing in the last year and less than half — 42 per cent — described themselves as "somewhat familiar" with the Forces.

Presentation of the research comes just a week after Prime Minister Justin Trudeau announced increased commitments to NATO missions in Latvia and Iraq.

The report found recognition that there were troops overseas, but an ill-defined notion of where they were and what they were doing.

"Most participants had a hard time conjuring up where they thought Canada was currently active internationally, though some brought up involvement in Iraq, Afghanistan, peacekeeping missions in Africa and disaster relief in Haiti," said the report.

The impression Canadians were involved in peacekeeping was also deeply embedded, even though the number of soldiers assigned to UN missions was — until just very recently — at an all-time low. Up to 250 aircrew and soldiers for a helicopter detachment supporting the UN peacekeeping force in Mali will be fully in place later this summer.

The survey portion found 90 per cent of those asked believed Canadian troops should be conducting disaster assistance on the world stage, followed closely at 85 per cent by those who believe in conducting peace support missions.

During the Afghan war, participants in previous surveys bemoaned how the combat mission in Kandahar had changed the character of the Canadian military, and they pined for a return to the day of peacekeeping.

At home, the majority of people see the military's mission as combating terrorism, but beyond that they're not quite sure what the military should be doing.

"Participants were hard-pressed to volunteer what roles they believed the [Canadian Armed Forces] plays domestically," said the report.

There was, in fact, confusion among focus group respondents about the military's role in the Arctic, a policy the previous Conservative government held dear.

"Many were surprised to learn about the [Canadian Armed Forces]'s role in patrolling the Arctic and there was some uncertainty about the importance of this role, particularly among the younger participants," said the research report. "They tended to think of the CAF's role in the Arctic as being about protecting the environment, while the older group was more aware of the territorial 'dispute' with Russia, Denmark, and the U.S."

The research is disturbing but not surprising to Rob Huebert, a political science professor at the University of Calgary and a senior research fellow with the Centre for Military and Strategic Studies.

He said it's troubling because the world has become more unstable, and by the Liberal government's own admission Canada cannot depend any longer on the United States to defend it.

The findings of the survey and the focus groups, Huebert said, show fundamental lack of understanding about the role of the military in the world, and that does not bode well for recruiting and for society in general.

It should have been entirely expected and cannot necessarily be addressed by ad campaigns and community outreach, he said.

"We haven't had anything in your face since Afghanistan," he said. "Memories are short."

Aside from the absence of a high-profile conflict, Huebert said, provincial education systems have focused on culture rather than conflict when teaching history.

"Many educators are uncomfortable with the idea of getting up and saying we need a military where individuals are trained to — if necessary — kill others," he said.

The federal political culture for decades has also contributed to a collective amnesia.

"Ultimately, the horrible thing about all of this is that we've had the luxury of always depending upon the Americans to take care of anything that is really nasty. So, therefore, we can pretend the military is there as a warm and fuzzy thing," Huebert said.

The current government's focus on the so-called softer aspects of defence — peacekeeping and gender equality — could backfire if a serious conflict erupts, he said.

"The Liberal have been very successful in demilitarizing our military," said Huebert. "We have men and women in harm's way in Ukraine and in Latvia, and if they blow up I think you're going to have an awful lot of shocked Canadians because they'd be saying, 'I thought our military was all about the environment and peacekeeping.'"

A spokesman for National Defence said the report helps inform the department's recruiting strategy, and much of that effort is being channelled through digital platforms.

"These platforms typically include both social media and traditional websites," said Dan Le Bouthillier in a statement.

"In addition, DND and the CAF have multiple social media channels that are used to amplify the recruitment message and support the online advertising campaign."

Quantitative results were based on a telephone survey of 1,524 Canadians conducted between April 30 and May 21 by the polling firm Léger, with the weighted results considered accurate within a margin of error of plus or minus 2.53 per cent.