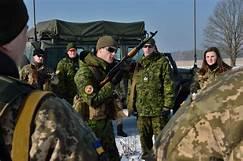 US military training has long been controversial. After years of protest over its training of brutal military leaders in the hemisphere, the US military’s School of the Americas in Georgia changed its name. Among the peace and anti-imperialist minded, it’s widely understood that military training is an important part of US global power projection.

“The objective was the modernization of their forces with the aim of one day becoming a member of NATO”, explained former Unifier commander, Jeffrey Toope, to Le Journal de Montréal recently. At the end of January La Presse reported that “Canadian training allows Ukrainian forces to practice and do joint maneuvers with NATO.” The story quoted Lieutenant-Colonel Luc-Frédéric Gilbert saying, “we are working to bring them to a context where they would be interoperable with NATO forces. That’s what we’re aiming for: changing an army that was based on a Soviet model to transform it to the NATO model.”

As part of UNIFIER Canadians trained neo-Nazis. Radio Canada recently documented Canadians training members of the Azov Regiment in November 2020 and August 2021 while CTV detailed other instances. In November Ottawa Citizen military reporter David Pugliese revealed that when Canadian military officials met leaders of the Azov Battalion in June 2018, they knew the group used the Nazi “Wolfsangel” symbol and praised officials who helped slaughter Jews and Poles during World War II. “A year before the meeting,” reported Pugliese, Canada’s Joint Task Force Ukraine produced a briefing on the Azov Battalion, acknowledging its links to Nazi ideology.” Canadian military officials were primarily concerned with managing any potential public relations fallout from at least two meetings, which included Azov representatives boasting about their Canadian support.

UNIFIER reinforced Ukrainian forces fighting in the east and enabled Kyiv to avoid its commitments under the Minsk II peace accord, which was overseen by France and Germany in February 2015. When UNIFIER was launched the Russian Embassy in Ottawa released a statement suggesting the training mission would undercut implementation of Minsk II.

Canadians assisted Ukrainian forces fighting in a conflict that saw 14,000 killed in the Donbas before Russia’s brutal invasion. In 2019 Canadian Lieutenant-Colonel Frédérick Côté told a Ukrainian TV channel that the conflict in Donbass was part of the training. “What they tell us [soldiers returning from Donbass] is valuable, because it allows us to make the training more relevant,” Côté said.

As a way to minimize direct involvement in fighting Canadian trainers were initially restricted to the western half of Ukraine. But, when the Liberals extended the mission in 2017, they eased restrictions requiring Canadians to stay away from the east (In July 2018 International Development Minister Marie-Claude Bibeau was the first G7 minister to travel to the line of contact between the warring factions.) Canadian trainers built up Ukrainian security forces obstructing the implementation of a United Nations Security Council endorsed peace accord.

The training mission in Ukraine may be Canada’s most significant and politically sensitive mission ever. But there’s usually broader strategic and geopolitical motivations driving Canadian training missions.

The Military Training and Cooperation Program (MTCP) stated that its training “serves to achieve influence in areas of strategic interest to Canada. … Canadian diplomatic and military representatives find it considerably easier to gain access and exert influence in countries with a core group of Canadian-trained professional military leaders.” When Ottawa initiated post-independence training missions in Africa a memo to cabinet ministers described the political value of training foreign military officers. It stated: “Military leaders in many developing countries, if they do not actually form the government, frequently wield much more power and influence domestically than is the case in the majority of western domestic nations … [it] would seem in Canada’s general interest on broad foreign policy grounds to keep open the possibility of exercising a constructive influence on the men who often will form the political elite in developing countries, by continuing to provide training places for officers in our military institutions where they receive not only technical military training but are also exposed to Canadian values and attitudes.”

Over 1,000 personnel from dozens of southern countries train in Canada every year through the MTCP. Canadian Forces also train other countries’ militaries through numerous forums.

Since 2007 Canadian troops have been training a Palestinian security force that serves as an arm of Israel’s occupation.Part of the US Security Coordinator office in Jerusalem, Canada’s security assistance to the Palestinian Authority is designed to protect a corrupt and compliant PA from popular backlash.

In recent years hundreds of Canadian troops have been leading a NATO training mission in Iraq designed to weaken the influence of the Iranian aligned Popular Mobilization Forces. After the 2003 invasion Canadian troops trained Iraq’s US-led military. High-level Canadian military personnel joined the NATO Training Mission in Iraq to “train the trainers” of Iraq’s military. A Canadian colonel, under NATO command, was chief of staff at the Baghdad-based training mission and Ottawa’s initial $810,000 was the largest donation to this training centre.

Canadian training in Afghanistan directly enabled the US war effort. A 2012 Ottawa Citizen headline explained, “Canadian training mission meant to free up US soldiers for Afghan combat: documents.” According to briefing notes prepared for Governor General David Johnston’s December 2011 visit to Afghanistan, 950 Canadian soldiers were deployed to Kabul and other Afghan cities to “free up American forces to move to a [more aggressive] combat role.”

There are numerous other highly politicized examples of trainings. After the Honduran military overthrew the country’s elected president in 2009, a small number of the Central American country’s troops continued to train in Canada.

Amidst a decades-long war with the New People’s Army, battles with Muslim groups and hundreds of political assassinations, Canadian soldiers trained Filipino military personnel. In the early 2000s a small number trained in Canada and Canadian Forces personnel went to the Philippines in 2008 to train the country’s special forces.

After Ghana won its independence the Canadian Forces organized and oversaw a Junior Staff Officers course and took up a number of top positions in the Ghanaian Ministry of Defence. In the words of Canada’s military attaché to Ghana, Colonel Desmond Deane-Freeman, the Canadians in these positions imparted “our way of thinking”. Celebrating the influence of “our way of thinking”, High Commissioner McGaughey wrote the undersecretary of external affairs in 1965 that “since independence, it [Ghana’s military] has changed in outlook, perhaps less than any other institution. It is still equipped with Western arms and although essentially non-political, is Western oriented.”

From Ghana to Palestine military training missions have been an important part of Canada exerting its international influence. Canadian military trainers’ links to the horrors in Ukraine should activate a much-needed discussion of the subject.