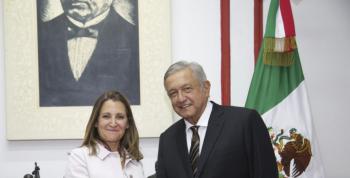 Neighbours on this continent, Canada and Mexico have a long and storied relationship, yet the conversations surrounding the two countries tends to largely revolve around the trade relationship between them. News reports published on the heels of Foreign Minister Chrystia Freeland’s visit to Mexico to meet with Mexican president-elect Andrés Manuel López Obrador were but the latest example of this laser focus on trade.

This does a disservice to Canadians, who as a result continue to operate under the impression that Canada plays a benevolent role in the region.

Meanwhile in Latin America, Canada’s progressive veneer is paper thin. Communities throughout the region are wary of Canada’s so-called friendly image, they have seen the true face of Canadian activities in the region. From support for dangerous and environmentally destructive mining operations, to support for regime change efforts, Canada has not been a good neighbour to the countries of Latin America.

“The truth is that people, especially in countries that have been directly affected by Canadian business or intervention, those people don’t have the same naïve perception Canadians often do,” Tyler Shipley, an instructor at Humber College, told rabble.ca.

“You speak to someone in Guatemala or Honduras about Canada and if they’ve lived anywhere near a Canadian mining operation they don’t think of Canada as some well-intentioned, friendly neighbour, they don’t believe that for a second. They have experienced firsthand what the Canadian state and Canadian corporations will do to exploit the land, the resources, the environment and people in other countries.”

Canada as an imperialist power

Various Canadian political leaders have claimed that Canada is not an imperialist country, something that Shipley considers to be “categorically false.”

According to Shipley, who authored a book about Canada’s role in the 2009 coup d’état in Honduras, Canada has an imperialist relationship with the region.

“[Canada has exerted] its political force, its capacity, to effectively bully other countries into accepting policies, programs, and positions that are beneficial to Canadian interests, in particular the interests of Canadian capital,” said Shipley.

Canadian imperialism is bred into the very DNA of the Canadian state and its history of interference in Mexico extends into the beginning of the 20th century.

“To truly understand Canadian foreign policy, you have to go back to colonialism and I would argue that the policies at the core of Canada’s colonial project -- the settlement of this place, the attempted destruction of Indigenous peoples --  those principles remain constant in Canadian foreign policy throughout 150 years,” said Shipley. “A lot of the same things are present in Canada’s relationship with Mexico, insofar as Canada has always looked at Mexico as a place of potential profit to be extracted.”

Shipley also argues that the white supremacy that he considers to be “at the heart of colonialism” is also present in its relationship with Mexico.

This perspective has informed Canada’s approach to its relationship with Mexico. According to Shipley, the Canadian government under Robert Borden took an interest in Mexico and the efforts of Mexican dictator Porfirio Diaz, seeing him as a viable partner for Canadian interests and tried to expand the presence of Canadian capital in Mexico.

In the early 20th century Canada had significant investments in Mexico, owning significant portions of Mexico’s trams and one country’s most important utilities, Mexican Light and Power, was Canadian, a concession that was granted by Porfirio Diaz.

According to Shipley, in an effort to protect Canadian interests, Canadians even traveled to Mexico during the Mexican Revolution, which ultimately ousted the Diaz regime, in order to advise the opponents of the revolutionaries.

Canada even broke diplomatic relations with the post-revolution government of Lázaro Cárdenas in Mexico when he nationalized the country’s oil industry, despite it not directly affecting a Canadian company.

“It gives you a sense of Canada’s politics, that Canada felt entitled to punish a Mexican government that was carrying out a policy that was good for Mexican people,” said Shipley.

Canada’s effort to portray itself as a friend to the world is largely a myth perpetuated by Canadian politicians themselves. They are enabled in this endeavour due their convenient ability to portray themselves as more-polite version of their southern neighbours in the United States, but in reality the foreign policy of both countries are driven by their desire to promote the interests of capital and it is not just a question of holding the bully’s coat.

“Canada absolutely is making its own foreign policy choices and pursuing its own independent imperialist project for the benefit of uniquely Canadian capital,” said Shipley.

Canada’s long history with mining companies and the preferential treatment provided to them is an clear-cut example of this.

However, Shipley argued that Canada also supports US imperialism in the region for strategic reasons, in an effort to signal to the world that it is “part of the imperialist club.”

In turn, Canadian politicians deliberately try to use Canada’s carefully crafted reputation abroad to facilitate their policy aims and advance the interests of imperialism.

The government of Justin Trudeau, under the leadership of Minister Freeland, has pursued a deeply antagonistic relationship with the government of Nicolas Maduro in Venezuela and in a recent forum on the political situation in Venezuela, Freeland argued that Canada’s “reputation” allowed it to play a greater role in efforts to undermine the Maduro government.

Freeland’s office has played an outsized role in regime change efforts in Venezuela and has been one of the most vocal champions of the Lima Group, the ad-hoc group of right-wing Latin American countries that oppose Maduro’s government.

Canada’s aggressive stance toward Venezuela is the clearest example of the country’s move toward a more open imperialism but one that is still rooted in a long history of interference.

Canada played a nefarious role in the 2009 coup in Honduras, where it helped legitimize the illegitimate regime installed after the military ousted democratically elected President Manuel Zelaya.

“Canada immediately worked to support the military government that took over, there’s no question that Canada played a key role in allowing the military dictatorship to succeed and to take full control of that country,” Shipley told Rabble.

“Canadian capital has made huge profits in Honduras as a result of that dictatorship,” he said.

Meanwhile, Hondurans are suffering the consequences of that coup.

Shipley views Canada’s foreign policy in the region as still being driven in part by old Cold War anti-communist attitudes and a reflection of the long term commitment Canada has had since the early 20thcentury to “interfering in other countries when people in other countries make choices that Canada doesn’t like.”

He points to Canada’s participation in the invasion of Russia after the Bolshevik Revolution, the armed conflict in the Korean Peninsula after World War II, as well as in the destabilization of the Democratic Republic of the Congo, including the assassination of Patrice Lumumba, and Canada’s major role in the ouster of Jean-Bertrand Aristide in Haiti.

The future of Canada-Mexico relations

Andrés Manuel López Obrador victory in the 2018 election marked a monumental shift in the country’s politics, though many believe that López Obrador actually won in 2006 -- during his first campaign for the presidency -- in an election that was marred by accusations of electoral fraud. That fraud was ultimately consolidated thanks in part to Canada, which worked to legitimize the election of Felipe Calderon and even saw then Prime Minister Stephen Harper travel to Mexico to take part in the inauguration.

Judging by the friendly exchange between the Canadian delegation that visited Mexico, which also included Finance Minister Bill Morneau, and López Obrador’s team, the two countries appear ready to maintain a positive relationship.

However, what course President-elect López Obrador will choose for Mexico is not immediately clear. He has made overtures to Mexico’s ruling class and seeks to improve Mexico-US relations, despite recent tensions between the two countries. But López Obrador was elected on a progressive platform and made significant commitments to the country’s poor and working class. He is inheriting a litany of problems, including dramatic income inequality, rampant poverty, and a country plagued with violence. He will have to take drastic steps to alleviate these issues, steps that may bring his government in conflict with the interests of Canadian capital, which maintains huge investments in the country.

It is this that will ultimately determine what kind of relationship Canada will have with the López Obrador government.

“The stronger his progressive position is held, the more negative the relationship with Canada will be,” said Shipley. “Canada on the other hand will be much more open to López Obrador’s government if, in fact, he makes concessions to the right, and drifts to the right, during his presidency.”

José Luis Granados Ceja is a journalist and photographer based in Mexico City. He previously worked as a staff writer for teleSUR and currently works on a freelance basis. His stories focus on contemporary political issues, particularly those that involve grassroots efforts to affect social change. He often covers the work of social and labor movements in Latin America. Follow him on Twitter and Instagram.