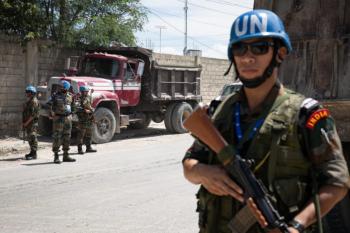 MINUJUSTH policemen in Haiti are now supposed to be all withdrawn by Oct. 15, 2019.

According to Security Council Resolution 2350 which established it on Apr. 13, 2017, the United Nations Mission for Justice Support in Haiti (MINUJUSTH), which replaced the United Nations Stabilization Mission in Haiti (MINUSTAH) on Oct. 16, 2017, was to have a “two-year exit strategy” that would result in a “non-peacekeeping United Nations presence in Haiti” this year.  In other words, UN troops and police forces are supposed to finally leave Haiti after 15 years and five months of militarily occupying it.

The force is made up of about 1,300 police officers strategically stationed in Haitian National Police (PNH) headquarters around Haiti. They have been deployed, just as MINUSTAH troops were, with heavy arms and tanks during the many large demonstrations rocking Haiti since last July.

The 16,000-officer National Police of Haiti (PNH) will take over Haiti’s security, without MINUJUSTH “monitors” standing behind them and breathing down their necks.

MINUJUSTH’s end  “will mean a significant handover of responsibility back into the hands of the Haitian government and its people,” said acting U.S. Ambassador to Haiti Jonathan Cohen. “Now is the time for the government of Haiti to step up and assume this responsibility.”

Haitian governments and the Haitian people do not need to “step up.” They have been demanding to “assume this responsibility” for years.

The Security Council first grabbed power from the Haitian government and people on Feb. 29, 2004 with Resolution 1529, which “authorizes the immediate deployment of a Multinational Interim Force” or MIF, composed of U.S., French, and Canadian troops, because of “its utmost concern at the continuing violence in Haiti.” This, it said, would have a “destabilizing effect on the region.”

In reality, the MIF’s deployment was to suppress the resistance of the Haitian people to the U.S.-led coup d’état the same day against President Jean-Bertrand Aristide, who was kidnapped by a U.S. SEAL team and flown in an unmarked jet to the Central African Republic.

Then on Apr. 30, 2004 in Resolution 1542, the Security Council, absurdly arguing that “the situation in Haiti continues to constitute a threat to international peace and security,” established the MINUSTAH “for an initial period of six months.” MINUSTAH took over from the MIF on Jun. 1, 2004. Through 19 subsequent resolutions, that force occupied Haiti for the next 13 years.

One of the main reasons Washington uses UN troops and police officers (mostly from poor neocolonies around the world) for its military occupation of Haiti was because they cost half as much, according to a 2006 U.S. Government Accounting Office (GAO) report.