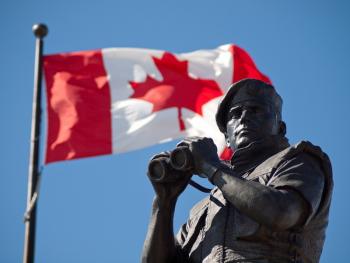 The Canadian flag flies over the Peacekeeping Monument in Ottawa. Photo from Flickr.

Kim Campbell once said “an election is no time to discuss serious issues.” While most politicians would reject the former prime minister’s bluntness, they largely follow her logic, offering sound bites and snappy proposals rather than substantial policy reforms.

Recognizing the often rigid parameters of electioneering, the Canadian Foreign Policy Institute has developed a concise, practical and cost-free foreign policy platform we believe most progressive voters could endorse:

None of these 20 points are particularly radical. None require significant new resources. Many will save taxpayers significant sums. What’s more, the plan doesn’t require Canada to withdraw from its international alliances or free trade accords, and it aligns with the United Nations charter. These proposals are also consistent with the government’s claim to support a “rules based international order” and “feminist foreign policy.”

Implementing these proposals would put us on the path towards a more just foreign policy, increase Canada’s standing in the global community, and rehabilitate our international reputation after losing a high-profile bid for one of the rotating seats on the United Nations Security Council last year.

Ahead of the next federal election, candidates from all parties should be asked if they support these modest proposals.